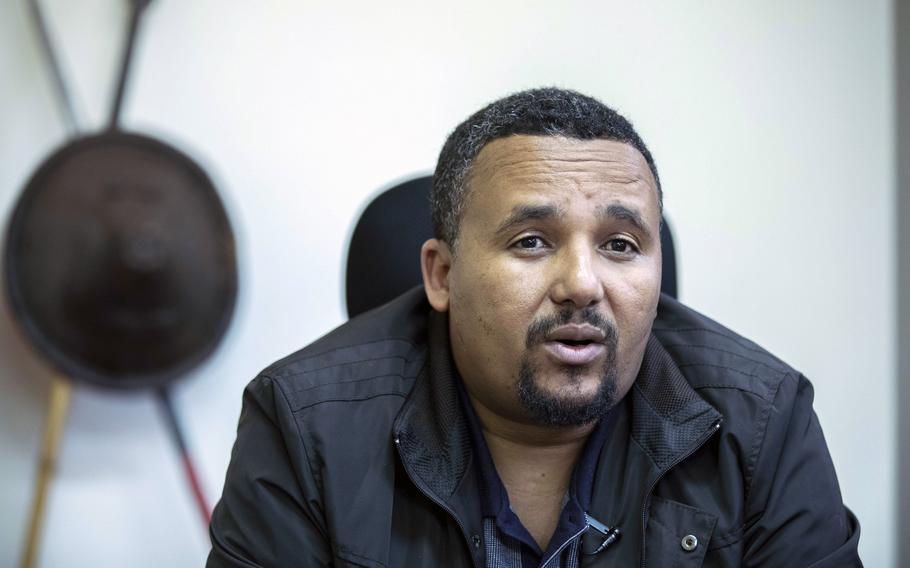 Opposition politician Jawar Mohammed speaks during an interview at his house in Addis Ababa, Ethiopia on Oct. 24, 2019. Ethiopia’s government on Friday, Jan. 7, 2022 announced an amnesty for some of the country’s most high-profile political detainees, including Jawar Mohammed and senior Tigray party officials, as Prime Minister Abiy Ahmed spoke of reconciliation for Orthodox Christmas. (Mulugeta Ayene/AP)

NAIROBI, Kenya — Ethiopia's government on Friday announced an amnesty for some of the country's most high-profile political detainees, including opposition figure Jawar Mohammed and senior Tigray party officials, as Prime Minister Abiy Ahmed spoke of reconciliation for Orthodox Christmas.

"The key to lasting unity is dialogue," the government said in a statement on the amnesty. "Ethiopia will make any sacrifices to this end."

It was the most dramatic move yet by the government after the country's deadly Tigray war entered a new phase in late December, when Tigray forces retreated into their region amid a military offensive and Ethiopian forces said they would not advance further there.

The war in Africa's second most populous country has highlighted the deadly ethnic tensions posing the greatest challenge to Abiy's rule.

But Tuli Bayis, a lawyer for Jawar of the Oromo Federalist Congress party and others, told The Associated Press that they refused to leave the prison facility as the order for their release came late in the day.

"They have security risks, so they preferred to exit the correction facility in daytime," Tuli said, adding he was not sure why the order for their release came now. "We heard it is an amnesty, that's what we know for now."

Ethiopia's ministry of justice said the amnesty for Jawar and Nega was granted "to make the upcoming national dialogue successful and inclusive." Ethiopian lawmakers on Dec. 29 approved a bill to establish a commission for national dialogue amid international pressure for negotiations to end the war.

The state broadcaster also named several senior officials with Tigray's ruling Tigray People's Liberation Front party as being granted amnesty and said they will be released soon. They include Sebhat Nega, Kidusan Nega, Abay Woldu, Abadi Zemu, Mulu Gebregziabher and Kiros Hagos. They were arrested in late 2020 when government forces captured most of the Tigray region shortly after war erupted between Tigray forces and Ethiopian ones.

The ministry of justice said the TPLF detainees "were granted amnesty taking into consideration their age and health condition."

Friday's announcement came a day after the United States said its outgoing special envoy for the Horn of Africa, Jeffrey Feltman, met with Ethiopia's prime minister to again press for a negotiated end to the war.

United Nations Secretary-General Antonio Guterres welcomed Friday's development and called on the parties "to build on this significant confidence-building step by agreeing a cessation of hostilities and a lasting ceasefire, as well as launching a credible and inclusive national dialogue and reconciliation process."

The U.N. chief said that following his last contact with prime minister Abiy he also looks forward "to a meaningful improvement in humanitarian access to all areas affected by the year-long conflict."

U.N. spokesman Stephane Dujarric said last month that an estimated 9.4 million people across Tigray and neighboring Amhara and Afar were "in critical need of food assistance." He warned Thursday that some U.N. agencies and aid organizations will be forced to halt operations in the Tigray region if humanitarian supplies, fuel and cash are not delivered very soon.

It's estimated that tens of thousands of people have been killed in the war that erupted in November 2020 between Ethiopian forces and the Tigray forces who once led the country. The government of Abiy, who had won the Nobel Peace Prize just a year earlier, by that point was wrestling with the challenge of various ethnic tensions growing in the wake of the prime minister's sweeping political reforms.

Those reforms have dramatically eroded with the war. Ethiopia's government has sought to restrict reporting on the conflict and detained some journalists, including a video freelancer accredited to The Associated Press, Amir Aman Kiyaro.