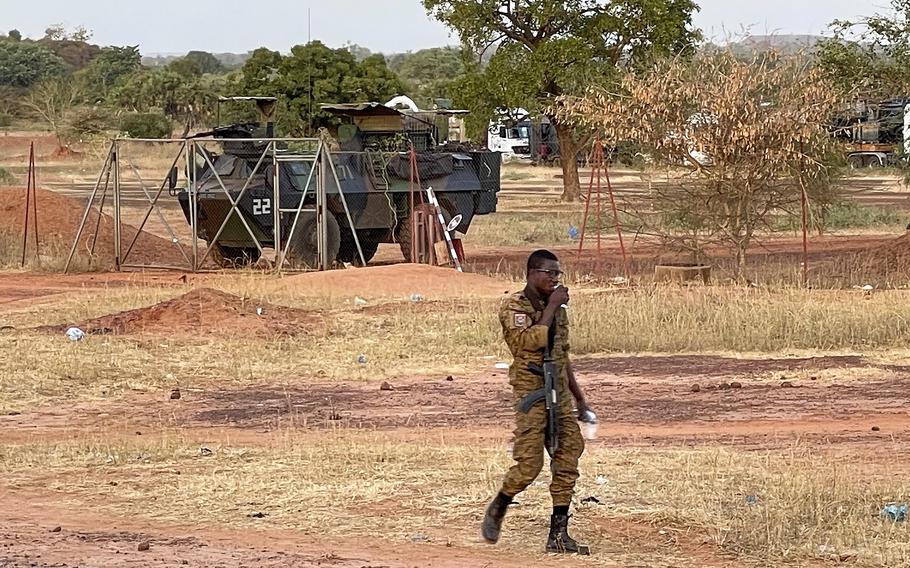 KAYA, Burkina Faso — The French military has denied injuring civilians in Burkina Faso when firing warning shots to disperse protesters who had blocked one of its military convoys.

Amid an increase in Islamic extremist violence in Burkina Faso, tensions have increased. Many people in Burkina Faso are angry that the former colonial power is not doing more to protect them in the West African country's five-year fight against jihadists linked to al-Qaida and the Islamic State group, which has left thousands dead and displaced more than 1.4 million people.

This came to a head when a French military convoy was stopped in the central city of Kaya as it headed to the neighboring country of Niger. A crowd surrounded the convoy refusing to let it move. The convoy has been able to move about 20 miles south of Kaya but remained blocked there Monday, making it five days that it has been forced to remain in the Kaya area.

Several witnesses said at least three people were injured when French soldiers tried to disperse the crowds on Saturday by firing warning shots into the ground, hitting three people in the legs.

The protesters were trying to cut through a barrier where a convoy of about 90 trucks guarded by approximately 100 French soldiers had pulled off to the side of the main road, said witnesses. The French forces responded by firing warning shots into the air, Pascal Ianni, spokesman for the chief of defense for the French armed forces, told The Associated Press.

"We just confirm that there were no wounded people and that the warning shots did not cause injuries to the protesters," he said. People might have been wounded because of the movement within the protest or because of Burkina Faso's security forces, he said, which were acting as a buffer between the French soldiers and the population.

But three witnesses told AP that the army first shot in the air and then toward the ground so that people would run away.

Burkina Faso's military did not respond to requests for comment. Burkina Faso's security forces did not fire their weapons, according to one soldier who spoke on condition of anonymity because he was not authorized to speak to the media.

The blockade of the French military convoy is the latest in a series of protests that began in June and increased last week after at least 53 people, including 49 gendarmes and 4 civilians, were killed in the Sahel region's Soum province, the deadliest single attack on the security forces in years.

Earlier this month Burkina Faso's opposition parties gave the president a one-month ultimatum to bring the country's security under control or it would organize protests to demand his resignation. A protest is scheduled for Nov. 27.

More than 30 French military convoys have traveled from neighboring Ivory Coast to Niger via Burkina Faso. This is the first time a convoy has been blocked for several days, said Ianni. He attributes the unprecedented unrest to the recent attack in the Sahel region and says the problem facing the country is not due to French forces but is a global threat of terrorism.

"We don't want to create a major issue with the Burkinabe population and we just want to say that we are in (the) Sahel (region) to fight terrorist groups and to protect (the) population not to fight (the) civilian population," he said.

"We're fed up with the French," said protester Mahamadi Sawadogo. "They're there with weapons, (but) jihadists have heavy weapons and kill us and kill us.”

There is growing discontent in Burkina Faso over the extremist violence, Andrew Lebovich, a policy fellow at the European Council on Foreign Relations, told AP.

"The ongoing and worsening insecurity is leading to fairly widespread discontent that is impacting the government, and is likely to get worse," he said.