Ethiopia PM says he will lead army ‘from the battlefront’ 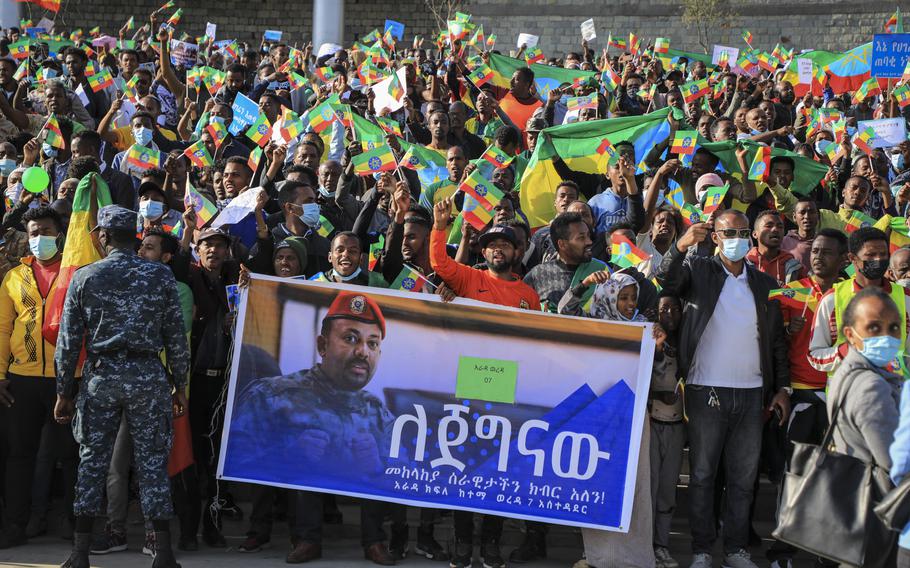 NAIROBI, Kenya — Ethiopia's prime minister says he will lead his country's army "from the battlefront" beginning Tuesday, a dramatic new step by the Nobel Peace Prize-winner in a devastating yearlong war.

"This is a time when leading a country with martyrdom is needed," Prime Minister Abiy Ahmed said in a statement posted on social media Monday night. With rival Tigray forces moving closer to the capital of Addis Ababa, his government declared a state of emergency earlier this month.

An estimated tens of thousands of people have been killed in the war between Ethiopian and allied forces and fighters from the country's northern Tigray region, who long dominated the national government before Abiy took office. The United States and others have warned that Africa's second-most populous country could fracture and destabilize the whole Horn of Africa.

The statement by the prime minister, a former soldier, does not say where exactly he will go Tuesday. His spokeswoman, Billene Seyoum, did not immediately respond to a request for comment.

"Let's meet at the battlefront," the 45-year-old prime minister said.

His statement also claims that the West is trying to defeat Ethiopia, the latest pushback against what his government has described as meddling by the international community. Envoys from the African Union and the U.S. have continued diplomatic efforts in pursuit of a ceasefire to the fighting and talks about a political solution.

In a year's time, Abiy's government has gone from describing the Tigray conflict as a "law enforcement operation" to an "existential war." With Ethiopia's military reportedly weakened in recent months, ethnic-based regional forces have been stepping up and Abiy's government has called on all able citizens to join the fight.

The prime minister chaired an executive meeting Monday of the ruling Prosperity Party and Defense Minister Abraham Belay told state media that "all security forces will start taking special measures and tactics as of tomorrow." He declined to elaborate.

The prime minister in his 2019 Nobel acceptance speech spoke passionately about war: "I crawled my way to peace through the dusty trenches of war years ago. ... I witnessed firsthand the ugliness of war in frontline battles. ... War is the epitome of hell for all involved. I know because I have been there and back."

Abiy was awarded the Nobel for making peace with neighboring Eritrea, on whose border he fought while stationed in the Tigray region.

The terms of that peace deal have never been made public. Critics of the current conflict allege that the deal was instead an agreement for the two countries to wage war on the Tigray leaders. Eritrean soldiers have been blamed for some of the worst atrocities in the war, even as Abiy denied for months that they were inside Tigray.