Tunisian trial shines light on use of military courts 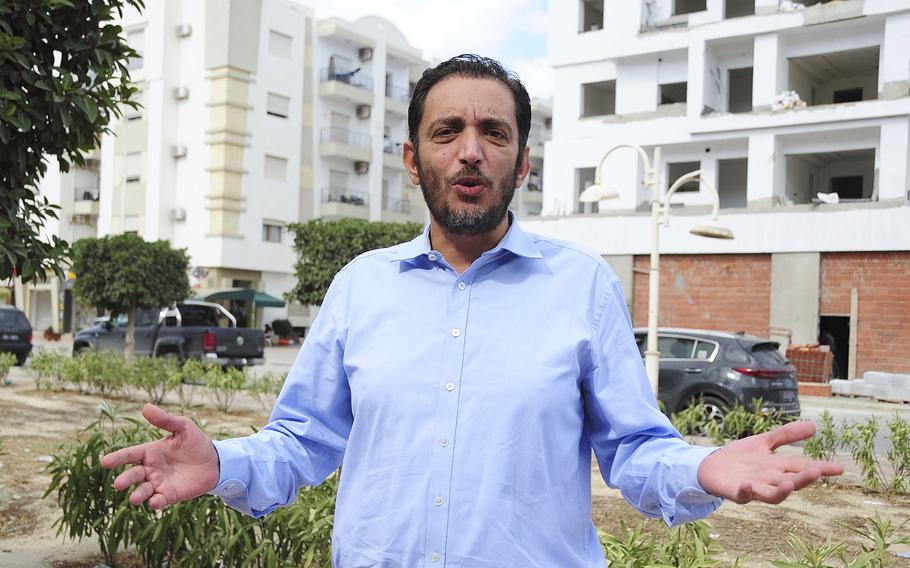 TUNIS, Tunisia — A few days after Tunisia's president froze parliament and took on sweeping powers in July, a dozen men in unmarked vehicles and civilian clothes barged into politician Yassine Ayari's family home overnight and took him away in his pajamas.

"These men weren't wearing uniforms and they didn't have a warrant," Ayari told The Associated Press. "It was violent. My 4-year-old son still has nightmares about it."

A 40-year-old computer engineer turned corruption fighter, Ayari will stand trial again in a military court on Monday, accused of insulting the presidency and defaming the army. It is the latest in a series of trials that shine a light on Tunisia's use of military courts to push through convictions against civilians. Rights groups say the practice has accelerated since Saied's seizure of power in July, and warn that its use further threatens hard-won freedoms amid Tunisia's democratic backsliding.

The charges Ayari faces relate to Facebook posts in which he criticized President Kais Saied, calling him a "pharaoh" and his measures a "military coup." Ayari intends to remain silent in court in a sign of protest against the judicial process, according to Ayari's lawyer, Malek Ben Amor.

Amnesty International is warning of an “alarming increase” in Tunisian military courts targeting civilians: In the past three months, it says, 10 civilians have been investigated or prosecuted by military tribunals, while four civilians are facing trial for criticizing the president.

That's especially worrying because Tunisia was long considered the only democratic success story to emerge from the Arab Spring uprisings a decade ago, and was long seen as a model for the region. Most countries in the Middle East are now ruled by authoritarian governments, where military courts — ostensibly tasked with targeting threats to stability — are a tool for crushing dissent. Jordan and Egypt are among countries with a military court system, while Israel has established a separate military court system for Palestinians in the occupied West Bank.

An independent member of parliament, Ayari cuts a controversial figure. Some suspect him of ties with radical Islam, but he is mostly known for criticizing the army and government and his aggressive corruption investigations. One led to the resignation of former Prime Minister Elyes Fakhfakh in 2020 after Ayari published documents proving a conflict of interest. In total, Ayari says he has been tried by a military tribunal nine times, leading to three sentencings.

"There is no law in military courts, no independence," he said.

Ayari is among Tunisian legislators whose employment status was suspended after Saied dismissed the government and froze parliament on July 25.

Saied also revoked the immunity of lawmakers like Ayari, who was swiftly arrested. He was jailed in July for a 2018 charge of defaming the army in a Facebook post and sentenced to two months in prison.

On Monday, he faces yet another charge, for comments he made after Saied's July power grab.

"Military courts are still under the undue control of the executive branch, as the President of the republic has exclusive control over the appointment of judges and prosecutors in these courts," reads a recent Amnesty report.

Saied's critics say that the army has become a political tool since July, noting that troops secured parliament and drawing comparisons with Egypt's military coup in 2013. Tunisia's army enjoys a high level of popularity and has traditionally played an apolitical role in the nation's affairs.

The president ordered the army to take charge of the nation's COVID-19 vaccination campaign, using their "image of strength and efficiency" to bolster his political standing, political analyst Sharan Grewal said.

Saied is also "trying to get quick wins by using the military courts, which are in theory more reliable in the prosecution of certain members of parliament," he said.

In September, Saied partially suspended the country's 2014 constitution, giving himself the power to rule by decree. Saied has also taken aim at the country's judiciary, whose ranks he says are filled with the "cancer" of corrupt judges who must "be cleansed." Observers have called Tunisia's political crisis a step back in the country's democratic transition.

During his recent sentence, Ayari says that he was filmed with video cameras in his cell and denied access to his correspondence. Despite acute stomach ulcers, guards gave him cold food — contrary to medical advice. In protest, Ayari went on a two-week hunger strike.

Representatives of Tunisia's National Body for the Prevention of Torture shared a report with the AP that corroborates some of Ayari's claims, including rights violations and evidence of "humiliating and degrading" treatment that posed a risk to his physical health.

The Ministry of Justice didn't respond to the AP's requests for comment.

Ayari is now preparing for a possible new stint behind bars.

"I'm trying to eat as much as possible and sleep, because those two things are difficult to do in prison," Ayari says. "This whole thing is not easy for my children. It is bad for their education: how are they supposed to tell the difference between right and wrong, justice and injustice, when they see their father get taken to prison?"