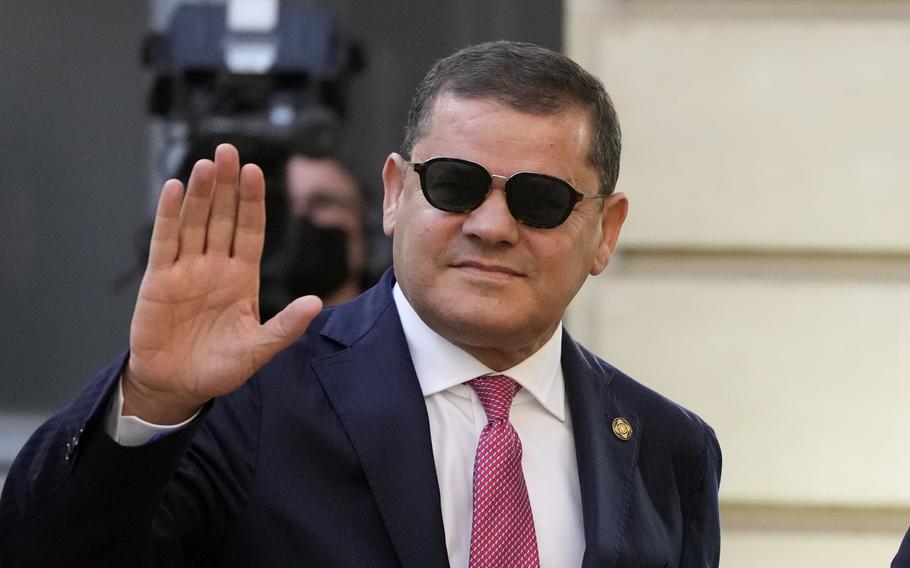 CAIRO — Libya's interim prime minister filed a request Sunday to run for president, despite being barred from elections next month under the current rules.

Prime Minister Abdul Hamid Dbeibah is meant to lead the country until a winner is declared following presidential elections on Dec. 24. He is the latest high-profile candidate to emerge in the race. He submitted his application a day before the Nov. 22 deadline. It remains unclear whether the country's electoral commission will accept his candidacy.

Dbeibah is barred from running under Libya's current election laws. He promised he would not seek office in the vote as a condition to taking on his caretaker role earlier this year. In order to be eligible, he also would have needed to have suspended himself from governmental duties at least three months before the polling date, which he did not.

Steps away from the electoral commission's office in Tripoli, Dbeibah told journalists he felt responsible for the continued reconstruction of the country, torn apart by years of civil war.

"Despite all the accompanying difficulties and ambiguous circumstances that accompanied the election journey, I invite you to never lose hope, as it has become clear, and obvious. The beginning of the right path," he said at a press conference held after submitting his papers.

The vote faces growing uncertainty. Libya has been wracked by chaos since a NATO-backed uprising toppled the late dictator Moammar Gadhafi in 2011. The country had for years been split between authorities in the east and a U.N.-supported administration in Tripoli, aided by nearby militias. Each side in the civil war has also had the support of mercenaries and foreign forces from Turkey, Russia and Syria and other regional powers.

Earlier this month, several controversial candidates came forward, including Seif al-Islam, the son and one-time heir apparent of Gadhafi. Powerful military commander Khalifa Hifter, who besieged the capital of Tripoli for nearly a year in 2019, is also running.

Dbeibah, a powerful businessman from the western city of Misrata, was appointed during U.N.-led talks in April to lead the executive branch of the interim government that also included a three-member Presidential Council chaired by Mohammad Younes Menfi, a Libyan diplomat from the country's east. Before he took the position, he signed a pledge that he would not seek office in the next elections.

His government was meant to replace the rival administrations based in east and west that had ruled Libya for years. But it also faced significant obstacles, including the reunification of the country's central banking system and equal distribution of revenue from country's oil and gas production.

His appointment to the premiership was confirmed despite allegations of corruption at meetings of the U.N.-picked 75-member political dialogue forum that appointed him. Then, Dbeibah denied the allegations and called for the U.N. to reveal the conclusions of its investigations.

Last week, Dbeibah told a youth rally that he would put his name forward for president if that's what the people want.