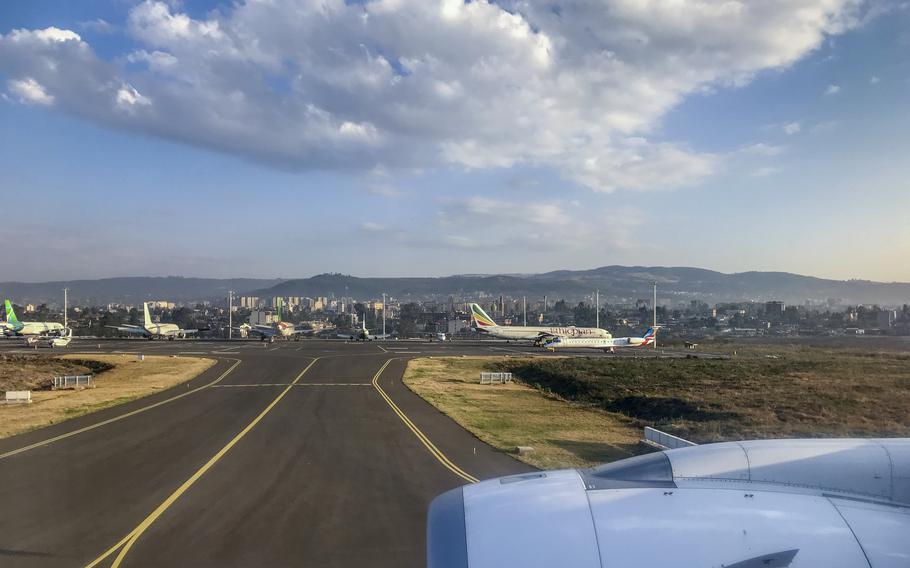 Planes sit on the tarmac at Bole International Airport in Addis Ababa, Ethiopia, on March 10, 2021. The United States Federal Aviation Administration warned pilots on Wednesday, Nov. 17, 2021 that planes operating at the airport could be “directly or indirectly exposed to ground weapons fire and/or surface-to-air fire. (Cara Anna/AP)

NAIROBI, Kenya — The United States is warning pilots that planes operating at one of Africa’s busiest airports could be “directly or indirectly exposed to ground weapons fire and/or surface-to-air fire” as Ethiopia’s war nears the capital, Addis Ababa.

The Federal Aviation Administration advisory issued Wednesday cites the “ongoing clashes” between Ethiopian forces and fighters from the northern Tigray region, which have killed thousands of people in a year of war. The U.S. this week urged its citizens in Ethiopia to “leave now,” saying there should be no expectation of an Afghanistan-style evacuation.

Diplomatic efforts to stop the fighting have met resistance, but Kenya's president told visiting U.S. Secretary of State Antony Blinken on Wednesday that Ethiopia's prime minister in a meeting on Sunday gave the impression he was ready to consider several proposals to ease tensions and reduce violence, a senior State Department official said.

Those include opening humanitarian access to Tigray and restoring government services to the region. Such steps, combined with a ceasefire agreement, could set the stage for more comprehensive peace talks, the U.S. official said.

The Addis Ababa international airport is the hub for the state-owned Ethiopian Airlines, a symbol of Ethiopia's former status as one of the world's most rapidly growing economies before the war. The airline in recent years became Africa's largest and best-managed carrier, turning Addis Ababa into the gateway to the continent. Addis Ababa is also the continent's diplomatic capital as home of the AU.

The FAA advisory notes no reports of disruptions at Bole International Airport and “no indication of an intent to threaten civil aviation,” but it says the risk to approaching and departing planes could increase if the Tigray fighters encircle the capital.

The Tigray fighters “likely possess a variety of anti-aircraft capable weapons, including rocket-propelled grenades, anti-tank weapons, low-caliber anti-aircraft artillery, and man-portable air-defense systems,” or MANPADS, which could reach up to 25,000 feet above ground level, the FAA advisory says.

In an acknowledgment of Bole airport's importance for onward travel for the African continent and beyond, the U.K. Minister for Africa Vicky Ford last week told reporters that Britain now advises against all travel to Ethiopia apart from the airport for departures and transfers.

The Tigray forces who had long dominated the national government before current Prime Minister Abiy Ahmed took office in 2018 have approached Addis Ababa in recent weeks and joined up with another armed group, the Oromo Liberation Army, with the aim of pressing Abiy to step aside.

The Tigray forces also say they are pressuring Ethiopia’s government to lift a months-long blockade on the Tigray region, which includes an Ethiopian government restriction on flights over Tigray. No food, medicine or other humanitarian aid has entered Tigray, a region of some 6 million people, for more than a month since Ethiopia's military resumed airstrikes there for the first time since June.

Ethiopian Airlines seized the world's attention in 2019 when the crash of a Boeing 737 Max shortly after takeoff from Addis Ababa killed 157 people. That and the earlier crash of another brand-new 737 Max off the coast of Indonesia had far-reaching consequences for the aeronautics industry as it brought about the grounding of Boeing 737 Max jets until late last year.