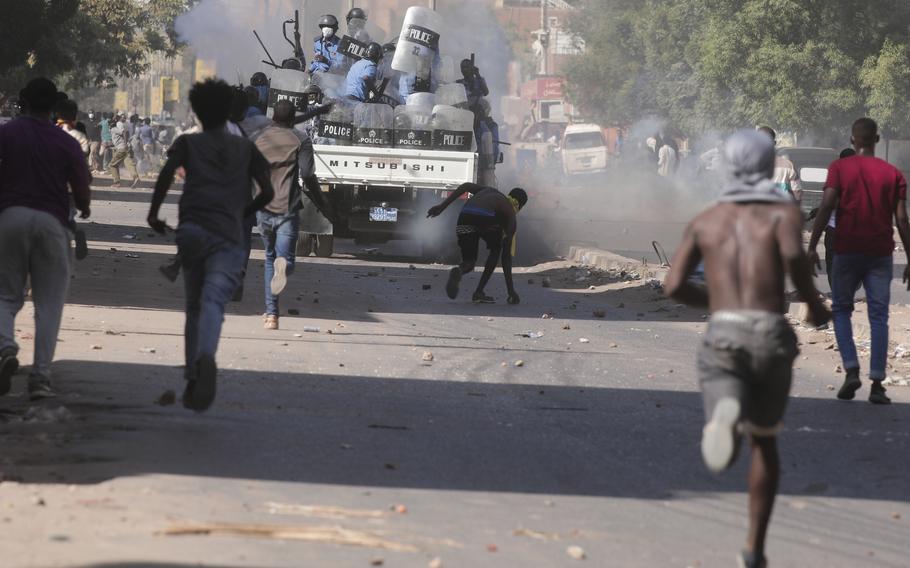 Sudanese confront the police during a protest against the military coup that ousted government last month, in Khartoum, Sudan, Wednesday, Nov. 17, 2021. (Marwan Ali/AP)

CAIRO — Sudan’s police chief on Thursday defended his security forces, saying they use only legal means to contain anti-coup protests. The Sudanese have been taking to the streets in masses since last month’s military takeover, which upended the country’s fragile transition to democracy.

The remarks by Chief of Police Lt. General Khalid Mahdi Ibrahim came a day after doctors said at least 15 people were killed by live fire during demonstrations against the Oct. 25 coup — the highest daily count of people killed since the takeover.

The United States expressed dismay over the protesters’ deaths. U.S. Secretary of State Antony Blinken said at a Thursday news conference in Abuja, Nigeria, that the U.S. is “deeply concerned by the violence used by the Sudanese military against people engaged in peaceful protest.”

Speaking to reporters in Khartoum, Ibrahim insisted that police are protecting civilians and primarily use tear gas to contain violence at the protests. He repeated claims that there have also been police casualties and promised investigations into any deaths, civilian or other.

Ibrahim’s statements contradict accounts from those at the protests and doctors who have been treating the wounded. Protest leaders in Sudan have repeatedly called on demonstrators to abide by nonviolent tactics in their attempt to halt the coup.

Security forces, including police but also military, and also the country’s paramilitary forces known as the Rapid Support Forces have faced off with protesters since the coup, trying to stop their marches.

Wednesday’s fatalities occurred in mostly in Khartoum’s district of Bahri, and the Sudanese capital’s twin city of Omdurman, according to the Sudan Doctors Committee. The deaths brought the overall death toll since the coup to at least 39. Hundreds have also been wounded, the committee says.

In one instance, video from the protests showed a member of the security forces raising a rifle in the direction of protesters. Blood stained the asphalt on a Khartoum road. Injured and bleeding protesters could also be seen being ferried away by cars from areas of confrontation.

Another video, circulated online, shows protesters standing in an open field before they are dispersed by gunfire into side streets. In one segment, protesters are seen carrying a woman who appears to be shot in the head and unconscious into a nearby home.

The coup, more than two years after a popular uprising forced the removal of longtime autocrat Omar al-Bashir and his Islamist government, has drawn international criticism. The United States, its allies and the United Nations have condemned the use of excessive force against protesters.

U.N. spokesman Stephane Dujarric said Thursday that the world body strongly condemned the “repeated use of excessive force against peaceful protesters” and renewed calls on “the de facto authorities and the security forces to exercise restraint, and refrain from committing further human rights violations.”

“Freedom of expression and assembly are fundamental human rights afforded to every Sudanese and they need to have the opportunity to express themselves peacefully and without fear of retaliation,” Dujarric said, and called for the release of all detained as a result of the protests since the coup.

Also Thursday, the Sudanese Professionals Association, which is part of the country’s pro-democracy movement, renewed calls for a national strike. It urged people to boycott all government agencies, abstain from paying bills and taxes, and erect roadblocks on the streets. The group also urged protesters not to engage with security forces.

“Let’s work all together to paralyze public life in the face of the criminals of the military council,” it posted on the group’s Facebook page.

Since the coup, mobile and internet services have been in near-complete dysfunction in Sudan — an apparent tactic to limit calls for gatherings and the spread of information. On Thursday, the Sudan’s state news network announced authorities have restored communications across the country.

But NetBlocks advocacy group said Thursday that social media platforms such as Facebook, Twitter and WhatsApp could still not be accessed through mobile networks.