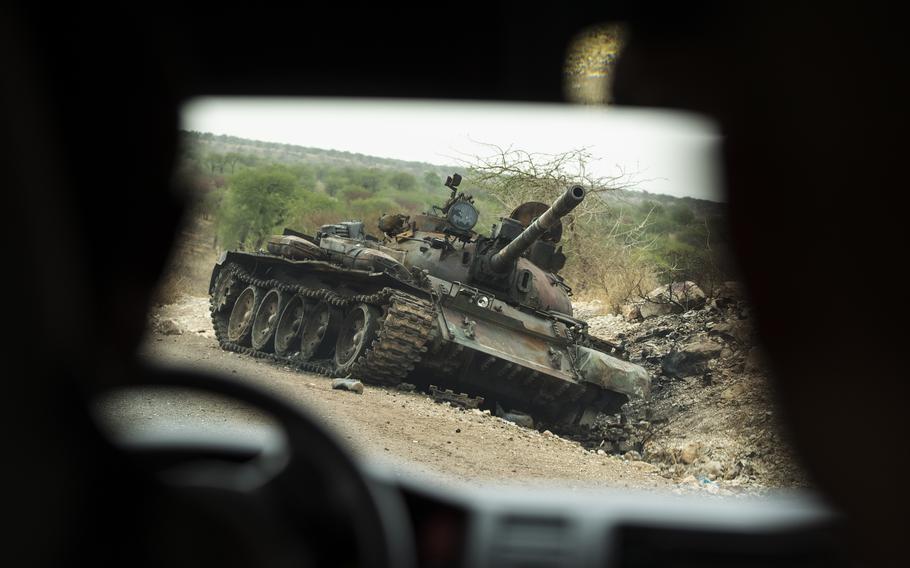 A destroyed tank lies on the side of the road in an area of western Tigray annexed by the Amhara region during the ongoing conflict, in Ethiopia, on May 1, 2021. The United Nations announced Thursday, Nov. 18, that six U.N. staff members detained by the Ethiopian government were released. (Ben Curtis/AP)

UNITED NATIONS — The United Nations announced Thursday that six U.N. staff members detained by the Ethiopian government were released and that all of the more than 70 detained truck drivers waiting to deliver aid to war-torn Tigray have also been freed.

But five U.N. staff members and one dependent remain in custody in the capital Addis Ababa and the U.N. is pressing for their release as well, U.N. spokesman Stephane Dujarric said.

The detentions were the government's latest slap at the United Nations after the recent expulsion of seven U.N. staffers, including several senior officials working in Tigray, as tensions continue over what the U.N. has called a "de facto humanitarian blockade" on the Tigray region.

The arrests of the drivers started Nov. 3 in the city of Semera, the gateway for aid convoys struggling to reach Tigray, according to the U.N., and earlier this week 34 drivers were released.

Dujarric said Thursday that "all of the 70 plus" drivers, contracted by the United Nations and the U.N. World Food Program, have now been freed.

Tigray has not received badly needed aid supplies including food, medicines and fuel since the Ethiopian military began hitting the Tigray capital with airstrikes on Oct. 18, and Dujarric said Thursday that aid convoys are still being blocked. Even before then, just 15% of the needed supply-laden trucks had entered Tigray since mid-July, the U.N. said.

On Nov. 10, the United Nations announced that 16 local employees had been detained in recent days in Addis Ababa.

All were ethnic Tigrayans, who witnesses say have been swept up by the thousands since a recent state of emergency was declared in response to reports that Tigray forces who have been fighting Ethiopian forces were approaching the capital.

Ethiopia's government has said it is detaining people suspected of supporting the rival Tigray forces who have been fighting the government for the past year.

A government spokesman asserted that the U.N. staffers were held for their "participation in terror" under a state of emergency declared by the prime minister on Nov. 2. But Dujarric said the U.N. was never given a reason for their detention -- and still has not received any explanation.

Thousands of people have been killed in the yearlong war in Tigray, thousands have been detained, and millions have been displaced.

Secretary-General Antonio Guterres has said at least 5.2 million people in the Tigray region need humanitarian assistance including at least 400,000 "living in famine-like conditions." Child malnutrition levels are now at the same level as they were at the start of the 2011 famine in Somalia, he warned.