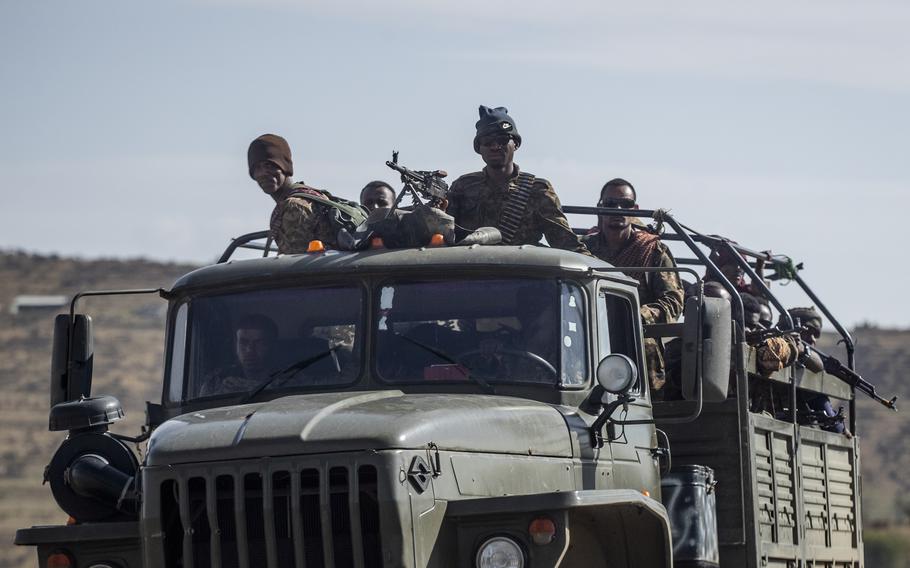 Ethiopian government soldiers ride in the back of a truck on a road near Agula, north of Mekele, in the Tigray region of northern Ethiopia, on May 8, 2021. Tigray forces say Ethiopia’s government has launched its threatened major military offensive against them in an attempt to end a nearly year-old war. (Ben Curtis/AP)

NAIROBI, Kenya — Tigray forces say Ethiopia's government has launched its threatened major military offensive against them in an attempt to end a nearly year-old war.

A statement from the Tigray external affairs office alleged that hundreds of thousands of Ethiopian "regular and irregular fighters" launched a coordinated assault on several fronts. It blamed Ethiopian forces and those from the country's Amhara region, where much of the recent fighting has occurred after Tigray forces retook much of their own region in June.

The Tigray statement, which also alleged airstrikes, drone strikes and bombardments by heavy artillery, could not immediately be confirmed amid communications cuts in areas of fighting.

In a statement to The Associated Press, the spokeswoman for Prime Minister Abiy Ahmed, Billene Seyoum, said only that "the government of Ethiopia will continue to counter the (Tigray forces') destruction, violence and killings in the Amhara region and elsewhere."

The new offensive has shattered a cease-fire that Ethiopia's government declared in June as its forces retreated from Tigray, where it had been pursuing the Tigray leaders who had dominated the national government for 27 years before Abiy took office and sidelined them.

Thousands of people have been killed since the political dispute turned deadly in November last year.

The new fighting also defies calls for peace by the United Nations and others, and the threat of new sanctions from the United States and European Union.

"Our forces have no other option than to defend their people," the new Tigray statement said.