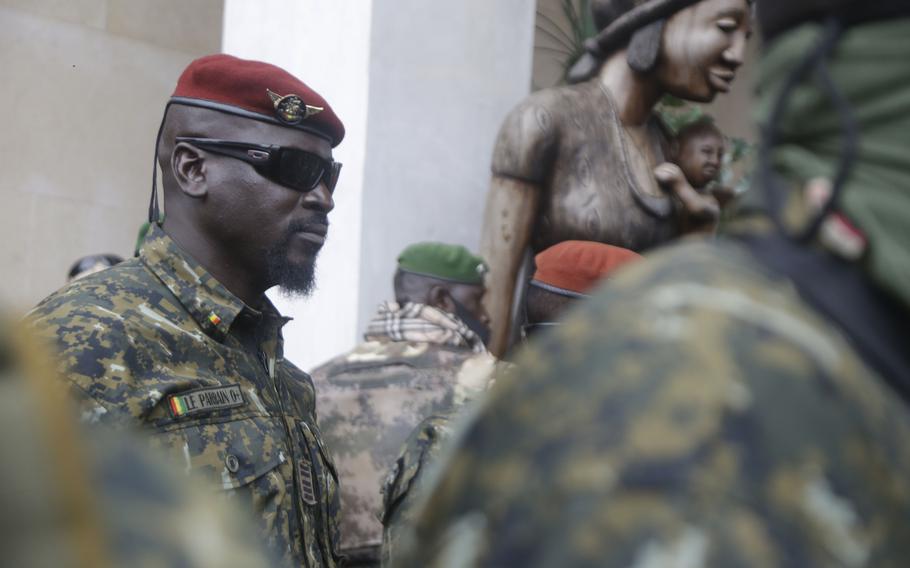 CONAKRY, Guinea — International pressure mounted Friday on the junta that seized power in Guinea after the African Union suspended the country and as a delegation of West African officials came to urge a return to democratic rule.

The African Union has suspended Guinea "from all AU activities and decision-making bodies," the organization announced. The suspension comes after military officers in Guinea overthrew President Alpha Conde on Sunday.

Mediators including foreign ministers from Ghana, Nigeria, Togo and Burkina Faso along with ECOWAS commission president Jean-Claude Kassi Brou met with Doumbouya on Friday at a hotel in Conakry, the capital. Doumbouya and the ECOWAS mediation team left the hotel without speaking to the media, but talks likely focused on the timing of a return to constitutional rule.

Burkina Faso's Minister of Foreign Affairs, Alpha Barry, said that the leaders will now report back to their respective presidents.

The delegation was able to meet with deposed president Conde, who was at the headquarters of the Special Forces, according to Barry.

"We saw President Alpha Conde. He's fine," Barry said. "The rest of the report will be made to the presidents."

The delegation is now heading back to Accra, Ghana, he said. The group has urged the coup leaders to assure the safety of the deposed president and others who have been arrested. Conde remains in the custody of the junta, who have only said that he is in a secure location with access to medical care.

Members of the delegation are believed to have met with Conde Friday, according to local media reports.

Doumbouya and the special forces that put the West African nation under military rule for the first time in over a decade have criticized Conde's government for corruption and the poverty of Guinea's people. The junta leader portrayed himself as a patriot of Guinea, taking power for the people who remained poor. However, experts say the coup happened after tensions increased between the army colonel and the president because of a recent proposal to cut some military salaries.

The junta has ordered the central bank to freeze all government accounts in an effort to secure state assets and "preserve the country's interest."

The junta announced the temporary freezing of withdrawals on bank accounts related to public administrative and commercial establishments in all ministry departments and the presidency. The freeze also applies to "the programs and projects of presidential initiatives," and "outgoing members of the government as well as senior civil servants, administrators and financial authorities of the state."

Conde's removal by force came after he sought and won a controversial third term in office last year, saying the term limits did not apply to him. Conde was elected in 2010 in the country's first democratic vote, with hopes that Guinea would see a fresh start after decades of corrupt, authoritarian rule and political turmoil. But in the years since, opponents say Conde failed to improve the lives of Guineans, most of whom live in poverty despite the country's vast mineral deposits of bauxite and gold.

Violent street demonstrations broke out last year after Conde organized a referendum to modify the constitution. The unrest intensified after he won the October election, and the opposition said dozens were killed during the crisis.