At scene of Ethiopia's new killings, some fight, some flee The dead bodies of unidentified people wearing military uniforms lie on the ground near the village of Chenna Teklehaymanot, in the Amhara region of northern Ethiopia on Thursday, Sept. 9, 2021. (AP)

CHENNA TEKLEHAYMANOT, Ethiopia — The smell of death lingered for days after the killings. The bodies, more than a dozen in the uniforms of fighters, others in civilian clothing, were still scattered on the muddy ground.

In a nearby churchyard, many more were already buried — at least 59 people killed by forces from Ethiopia's northern Tigray region, residents alleged. Six bodies of priests were laid to rest inside the church itself. In their rush to flee to safer areas of the Amhara region, residents said at times they placed multiple bodies in single graves.

At the scene of one of the deadliest battles of Ethiopia's 10-month Tigray conflict, witness accounts reflected the increasingly blurred line between combatant and civilian after the federal government weeks ago urged all capable citizens to stop the Tigray forces "once and for all."

When the Tigray fighters captured the village of Chenna Teklehaymanot in the Amhara region on Aug. 31, shortly after a military division defending the area left for unknown reasons, "our (local) defense forces confronted them. Ordinary people here also joined with whatever they could," said 66-year-old Dagnew Hune. He told The Associated Press he witnessed the ensuing killings and helped to bury the dead.

About 100 people are still missing, Dagnew said on Thursday, walking past what he said were fresh graves in the churchyard covered with tree branches and stones.

Local officials have said as many as 200 people in all may have been killed over several days of fighting, with the worst of it on Sept. 4 in Chenna Teklehaymanot after Ethiopian forces reportedly blocked an attempt by Tigray fighters to seize the city of Gondar. 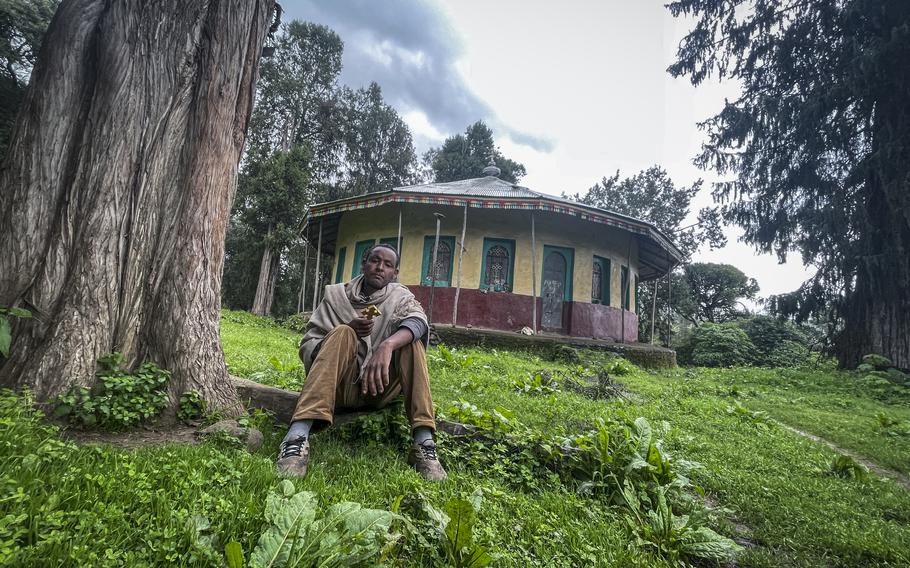 Priest Yared Adamu holds an Ethiopian Orthodox cross in the churchyard where residents say more than 50 civilians have been laid to rest in makeshift graves, in the village of Chenna Teklehaymanot in the Amhara region of northern Ethiopia Thursday, Sept. 9, 2021. (AP) Men gather to speak to a militia fighter Kibret Bidere, with an injured arm, center, near the village of Chenna Teklehaymanot, in the Amhara region of northern Ethiopia Thursday, Sept. 9, 2021. (AP) 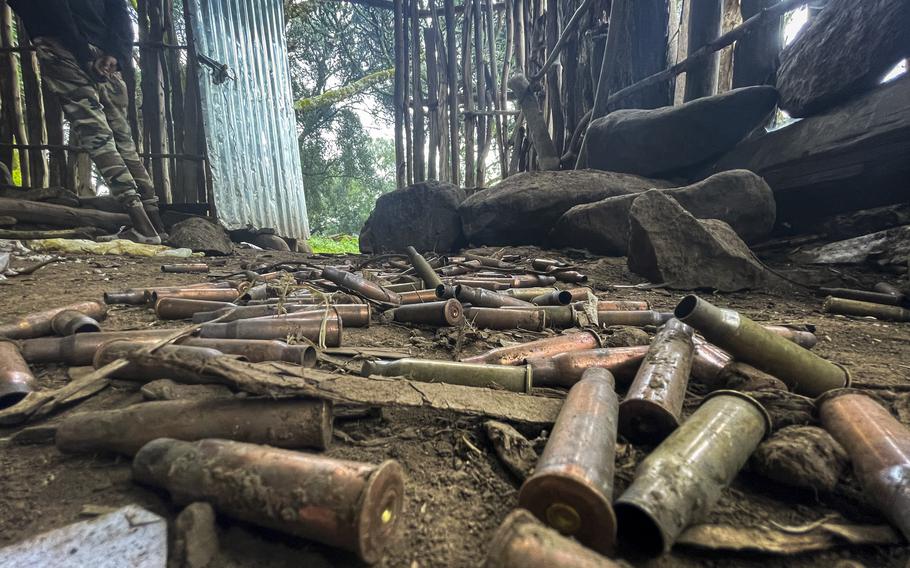 Spent bullet casings lie scattered on the ground in a hut near the village of Chenna Teklehaymanot, in the Amhara region of northern Ethiopia Thursday, Sept. 9, 2021. (AP)

The Tigray forces have since retreated north, residents said, leaving survivors to check the pockets of dead fighters for clues to their identities. And some questioned why the division of Ethiopian soldiers had left them alone, with only local militia and residents to defend them.

Since retaking much of their embattled home region from Ethiopian forces in June, the Tigray fighters have brought the war into the country's neighboring regions of Afar and Amhara, where Chenna Teklehaymanot is located. The Tigray forces say they are pressuring Ethiopia's government to lift a blockade on Tigray that has left millions of people without telecommunications, electricity, banking services and almost all humanitarian aid.

Now a massive humanitarian crisis that already affects millions inside Tigray is spreading as hundreds of thousands of people flee the Tigray fighters, fearing their retaliatory attacks. The Tigray forces have said they are not attacking civilians.

But grieving witnesses and survivors in Chenna Teklehaymanot said the Tigray forces arrived demanding food, then killed people who tried to resist when the fighters killed their animals or looted their properties.

"Many of the innocent civilians here have lost their lives," said local priest Yared Adamu. Holding a cross, he walked inside the damaged church, where bullet casings were scattered on the ground.

Spokesman for the Tigray forces Getachew Reda, speaking with the AP on Friday, called allegations that Tigray fighters had targeted civilians in the village "absolutely, absolutely false." He accused Amhara regional special forces of forcing civilians to fight, and "of course they will be caught in the crossfire."

Told that residents had not reported being forced to fight, Getachew replied, "Whatever they told you was staged drama." He also denied allegations that the Tigray forces were retreating.

Ethiopia's widening war, with atrocities reported on all sides, has led to urgent calls by the United Nations, United States and others for an immediate cease-fire and a path to dialogue. But there is little peace in sight. Villagers carry wood on a path near the village of Chenna Teklehaymanot, in the Amhara region of northern Ethiopia Thursday, Sept. 9, 2021. (AP) An unidentified armed militia fighter walks down a path as villagers flee with their belongings in the other direction, near the village of Chenna Teklehaymanot, in the Amhara region of northern Ethiopia Thursday, Sept. 9, 2021. (AP) The dead body of an unidentified man lies on the ground near the village of Chenna Teklehaymanot, in the Amhara region of northern Ethiopia Thursday, Sept. 9, 2021. ()

What began as a political dispute has killed thousands since November. Now in the Amhara region, as in Tigray, some outraged civilians have joined the fight.

Resident Kibret Bidere described himself as a member of the Amhara militia called the Fano. He told the AP his sister and her 1-year-old son had been killed, and his father was missing.

"Even today we are looking for the lost ones from morning to evening, but we haven't found any," he said, nursing an injured arm from previous fighting.

The village's traditional homes of grass and mud were emptying as residents departed through the mist, searching for safety elsewhere. Many had bundles on their backs. One, a gun propped on his shoulder.

"Our home was attacked by heavy artillery," said Senait Ambaw, who was leaving with her husband, clutching a chicken. "All the people of Chenna have no home now. It's over."

In the nearby town of Dabat, Amhara militia riding by on a truck fired their guns skyward in victory. Children ran after them, collecting the bullet casings from the ground.