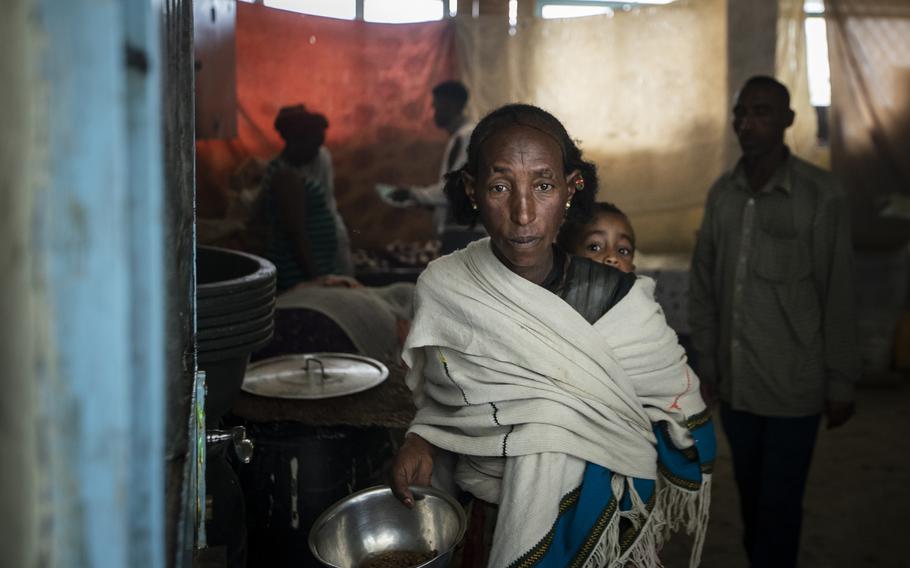 A displaced Tigrayan woman walks out of a classroom-turned-kitchen after receiving food at the Hadnet General Secondary School which has become a makeshift home to thousands displaced by the conflict, in Mekele, in the Tigray region of northern Ethiopia on May 5, 2021. (Ben Curtis/AP)

The estimate was presented at a meeting on Monday of the Inter-Agency Standing Committee, comprising 18 U.N. and non-U.N. organizations that is chaired by U.N. humanitarian chief Mark Lowcock. U.N. Secretary-General Antonio Guterres also attended, the official said.

A note from the meeting said millions of other people in Tigray urgently need food to avoid famine, said the official, who has not authorized to speak publicly.

Last Friday, Lowcock warned that famine is imminent in Tigray and in the country's north, saying there is a risk that hundreds of thousands of people or more will die.

No one knows how many thousands of civilians or combatants have been killed since months of political tensions between Ethiopian President Abiy Ahmed's government and the Tigray leaders who once dominated it exploded into war last November. Eritrea, a longtime Tigray enemy, teamed up with neighboring Ethiopia in the conflict.

The U.N. has criticized the lack of access to all areas of Tigray for humanitarian workers seeking to deliver aid. 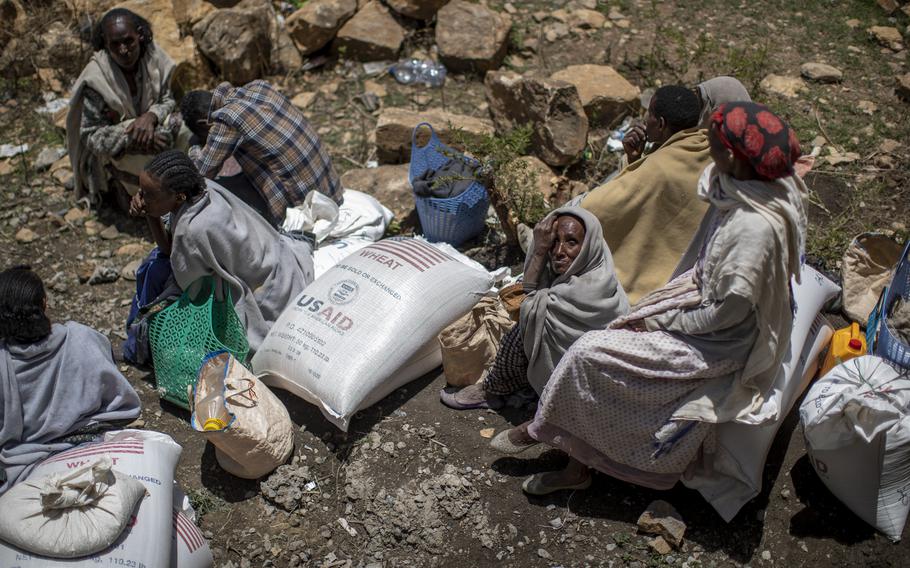 An elderly Ethiopian woman sits next to a sack of wheat after it was distributed to her by the Relief Society of Tigray in the town of Agula, in the Tigray region of northern Ethiopia, on May 8, 2021. (Ben Curtis/AP)

U.N. spokesman Stephane Dujarric said Wednesday that U.N. staff on the ground report the continuing blocked movements of aid, and interrogation, assault and detention of humanitarian workers at military checkpoints. There has also been looting and confiscation of "humanitarian assets and supplies" by parties to the conflict, he said.

Some areas of Tigray remain inaccessible, Dujarric said, and in accessible areas "the situation is dire, including dysfunctional water systems and limited or no health facilities."

"Levels of food insecurity and malnutrition are at alarming levels," Dujarric said. "Preliminary field reports from Axum and Adwa in the central zone indicate visible signs of starvation among internally displaced people. In a community in the northwestern zone of Tigray, aid workers noted a severe need for food, after the burning or looting of harvests."

Lowcock has said the war destroyed the economy along with businesses, crops and farms, and there are no banking or telecommunications services in Tigray.

"We are hearing of starvation-related deaths already," he said in a statement Friday, urging the international community "to wake up" and "really step up," including with money.

In late May, Lowcock said that since the war began, an estimated 2 million people had been displaced, civilians killed and injured, rapes and other forms of "abhorrent sexual violence" widespread and systematic, and public and private infrastructure essential for civilians destroyed, including hospitals and agricultural land.

"There are now hundreds of thousands of people in northern Ethiopia in famine conditions," Lowcock said then. "That's the worse famine problem the world has seen for a decade, since a quarter of a million Somalis lost their lives in the famine there in 2011. This now has horrible echoes of the colossal tragedy in Ethiopia in 1984."