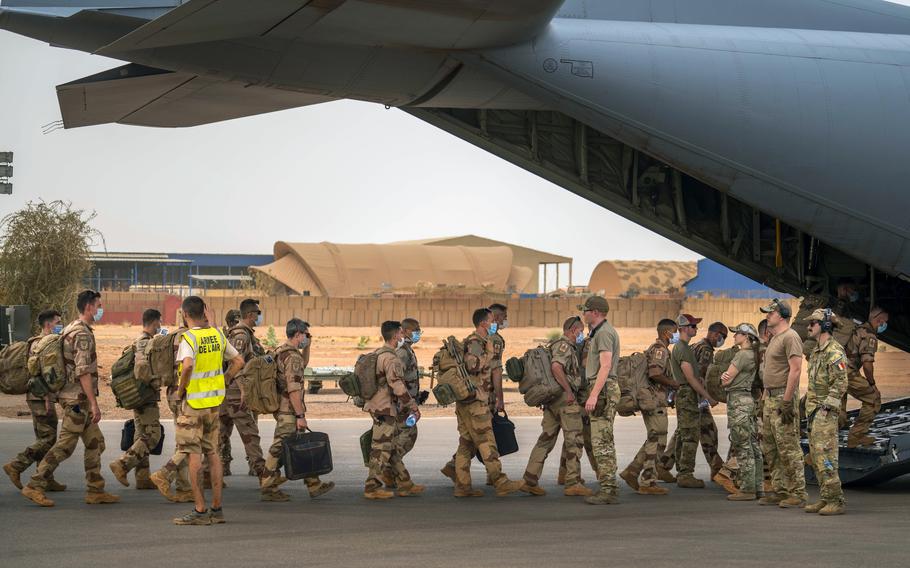 French Barkhane force soldiers board a US Air Force C130 transport plane as they leave their base in Gao, Mali Wednesday June 9, 2021. France has suspended joint military operations with Malian forces until the junta led by Col. Assimi Goita, who retook control of Mali's transitional government May 24, complies with international demands to restore civilian rule. (Jerome Delay/AP)

In a news conference, Macron spoke about the "profound transformation" of France's military operation in Mali and neighboring countries — without giving a timeframe.

France's Operation Barkhane will formally end, he said, and will be replaced by another mission focused on fighting Islamic extremists that relies more on regional partners.

Details will be unveiled at the end of June, he said, including on the number of troops France is keeping in the region. France now has more than 5,000 troops in the Sahel.

"The final goal is to reduce our multiple military deployments" in the region, he said.

"I'm saying it again: France is in Africa only at the request of Africans ... to fight against terrorism," Macron added. "But the shape of our presence, an operation abroad involving 5,000 troops, is not adapted any more to the reality of the combats."

He said France will focus in the future on deploying special forces, in cooperation with other European countries, as part of the so-called Takuba task force that is meant to play an increasing role in the fight against extremists. French Barkhane force soldiers who wrapped up a four-month tour of duty in the Sahel board a US Air Force C130 transport plane as they leave their base in Gao, Mali on Wednesday June 9, 2021. (Jerome Delay/AP)

A French top official said it will take several months to implement the changes. Paris will first hold talks with its European and African partners, he said.

Several thousand French troops will remain in the region in total, participating in various operations including the new cooperation mission.

"In the end, the French presence in Sahel will remain significant," the official said. He was speaking anonymously in accordance with the presidency's customary practice.

French troops have been present in Mali since 2013 when they intervened to force Islamic extremist rebels from power in towns across the country's north. Operation Serval was later replaced by Barkhane and was expanded to include Chad, Niger, Burkina Faso and Mauritania in an effort to help stabilize the broader Sahel region.

Islamic militants, though, have continued to launch devastating attacks against the militaries fighting them as well as increasingly against civilians. About a week ago, extremists in Burkina Faso launched the deadliest attack in years, leaving at least 132 people dead.

Hundreds also have died since January in a series of massacres targeting villages on the border of Niger and Mali.

While governments in the Sahel have embraced France's military help, some critics have likened their presence to a vestige of French colonial rule.

Conflict analysts say the move could be linked to political instability in Mali. France's announcement comes days after Mali coup leader Col. Assimi Goita was sworn as president of a transitional government, solidifying his grip on power in the West African nation after carrying out his second coup in nine months.

Michael Shurkin, director of global programs at 14 North Strategies, a consultancy based in Dakar, Senegal, said: "(The) truth is that France's strategy can only work if the Malians do their part, which means improving governance. But Goita's serial coups suggest the Malians aren't."

Siaka Coulibaly, an analyst with the Center for Public Policy Monitoring by Citizens, in Burkina Faso, said the decision wasn't a surprise, but worried about the consequences of the troop reduction.

A 31-year-old Nigerien staffer on Barkhane's army base in Niger's capital, Niamey, told the AP it's "not fair" and "not normal" that the situation in Mali should impact the situation in Niger. The AP is not using his name to protect his identity. 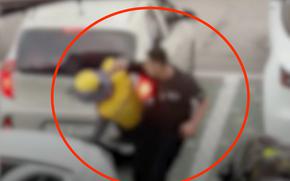