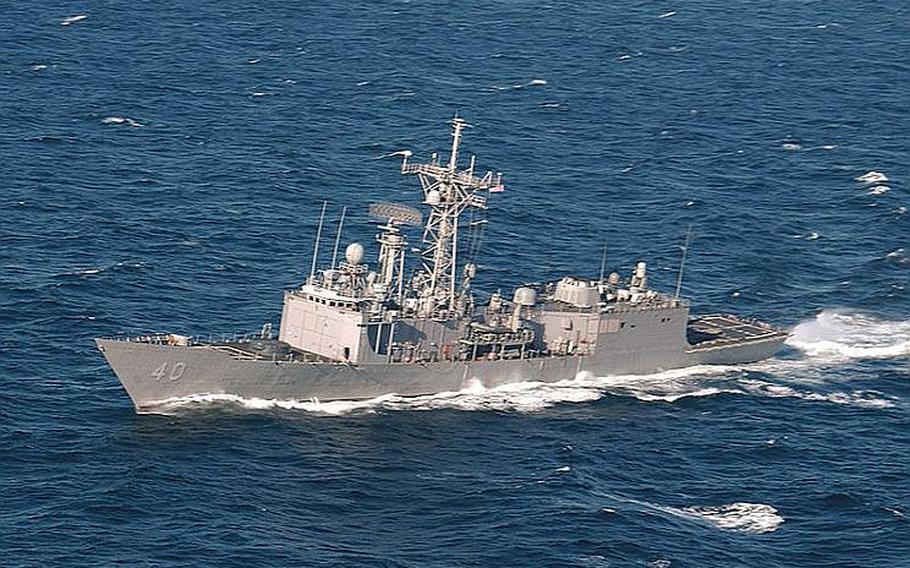 NAPLES, Italy &mdash; U.S. and French sailors helped detain 12 suspected pirates near the Somalia coast after a nearby merchant ship sent out a distress message, NATO officials announced this week.

The Panama-flagged merchant ship sent the call for help Sunday after it was approached by a suspected pirate skiff while en route from Oman to Kenya, NATO&rsquo;s Allied Maritime Command said in a news release.

The merchant ship&rsquo;s armed security team exchanged fire with the suspected pirates, who eventually moved away. The ship continued toward Kenya after sustaining minor damage.

Meanwhile, NATO directed the nearby USS Halyburton toward the position of the suspected pirates.

Within hours, Halyburton&rsquo;s crew located and detained 12 suspected pirates on board a motor whaler that appeared to be acting as a &ldquo;mothership&rdquo; for smaller pirate skiffs, according to NATO.

The pirates were being detained aboard the European Union naval task force&rsquo;s French frigate Surcouf pending the results of a legal investigation.

There were 278 piracy attacks worldwide and 27 hijackings in 2012 as of Dec. 3, according to the International Maritime Bureau&rsquo;s Piracy Reporting Centre. Of those, Somali pirates were linked to 71 incidents and held 147 hostages in late 2012.

It&rsquo;s a stark drop from 2009, when piracy attacks climbed to 406, according to the maritime bureau.

NATO has overseen anti-piracy efforts near the Horn of Africa since late 2008. The operation was extended last year through the end of 2014.

Roughly 22,000 ships travel through the Gulf of Aden near northern Somalia each year, according to NATO.

The frigate USS Halyburton joined NATO&rsquo;s anti-piracy force in September, replacing the USS Taylor after a seven-month deployment, according to NATO.