The age of true jetpack flight is near, and Special Operations Command wants in on it 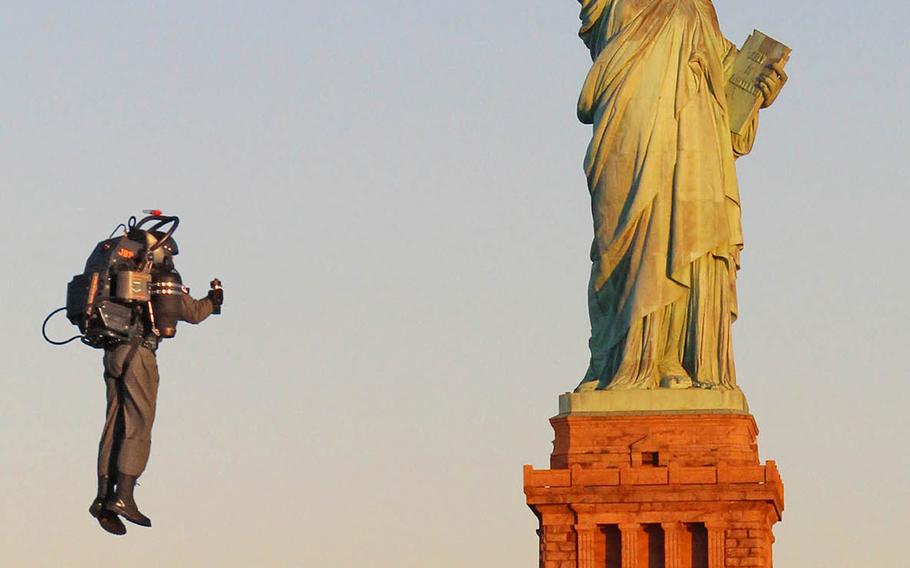 David Mayman, CEO and cofounder of JetPack Aviation, flies the JB-9 jetpack near the Statue of Liberty during a demonstration in November 2015. The company is now working on a prototype for U.S. Special Operations Command. (Courtesy of JetPack Aviation)

David Mayman, CEO and cofounder of JetPack Aviation, flies the JB-9 jetpack near the Statue of Liberty during a demonstration in November 2015. The company is now working on a prototype for U.S. Special Operations Command. (Courtesy of JetPack Aviation) 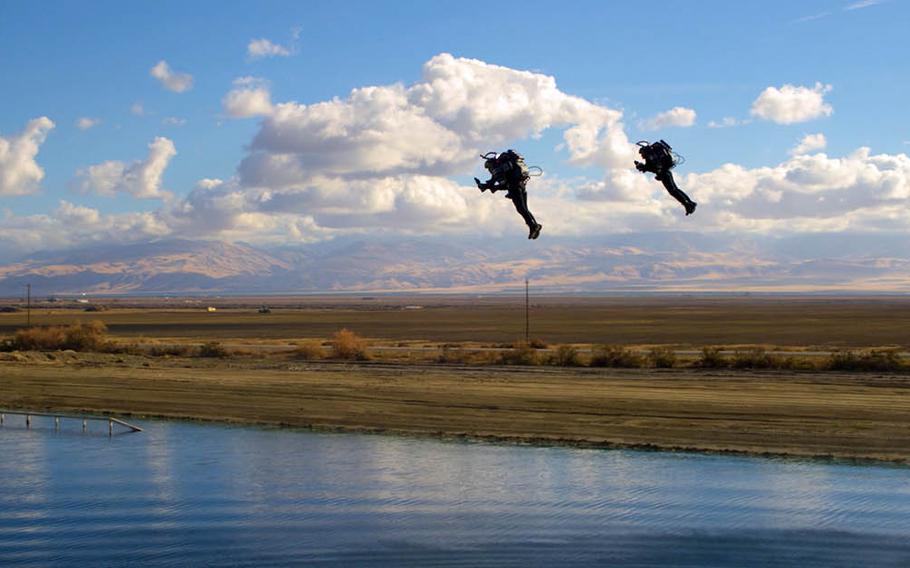 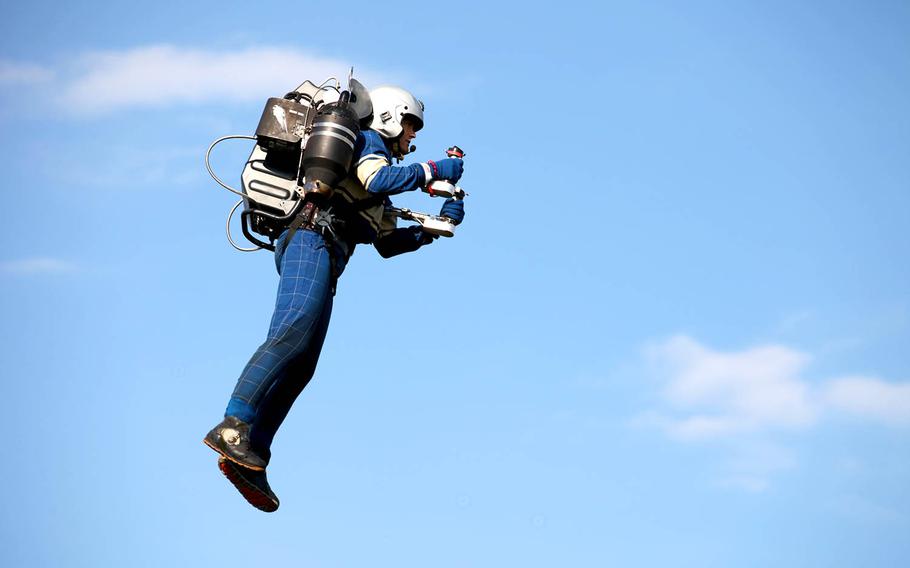 JetPack Aviation's new generation of individual lift devices can remain airborne for more than 10 minutes at speeds of over 200 mph. (Courtesy of JetPack Aviation)

Functioning rocket packs were featured in 1960s-era TV shows such as “Gilligan’s Island” and “Lost in Space,” and James Bond donned a Bell Rocket Belt in 1965 to escape villains in “Thunderball.”

But the flight duration for such compact machines — a class of aircraft called individual lift devices, or ILDs — was measured in seconds, and their fuel source was exotic.

Breakthroughs in the past decade in miniaturization of electronics and the casting of advanced nickel alloys, however, have radically altered key technologies needed for developing practical, useful ILDs.

JetPack Aviation in California expects to have a full-scale ILD prototype ready for initial flight testing by late summer for U.S. Special Operations Command, or SOCOM. The turbine engine-driven device can reach speeds of more than 200 mph and can remain airborne for more than 10 minutes. It burns commonly available Jet-A fuel, which is a high-purity kerosene.

The company entered into a development agreement with SOCOM in 2016, and since then, it has trained a Navy SEAL to fly its strap-on jetpack and has created a rapid operator-training program.

JetPack Aviation is the “first and only company” exploring jetpack technology for SOCOM, the command told Stars and Stripes in a statement.

“The possible uses of this technology are still being evaluated,” the statement said. “USSOCOM does not discuss specific details or potential applications of such technologies.”

JetPack Aviation CEO David Mayman said of the development agreement, “We work together with their operators, with their team members, for exactly what our jetpacks would need to be useful on a real mission — endurance, height, speed, payload, that sort of thing.”

ILD development during the past century has been “sporadic and underwhelming,” Australian Army Lt. Col. Matthew Dirago wrote in the December issue of the U.S. Army journal Military Review.

“From 1940 to 1983, [ILD] technology promised a revolution but delivered merely impractical novelties,” he wrote in the article “Raising the Bar: The Future of Individual Lift Devices in Warfare.”

“The expectations of flying shoes, platforms, ducted-fan lift devices, rocket belts and jet belts always exceeded the technological limitations of that time,” he wrote. “Similarly, progress since 1983 has been unremarkable, stymied by reduced corporate and military research into ILD.”

Recent advances in the fields of propulsion and electronics, however, have ushered in feasible ILD technologies, Mayman said.

For decades, rocket belts got their needed thrust by consuming hydrogen peroxide, which produced a short burst of extremely high power. “I think the world record flight was 31 seconds,” Mayman said.

“In terms of air-breathing turbines, there really wasn’t anything available in the thrust class needed,” he said.

Improved nickel alloys made turbine wheels stronger and allowed them to withstand higher temperatures without distorting, he said.

Mayman, who has a commercial pilot rating for fixed-wing aircraft and helicopters, described his two-decade quest for a working ILD as “a labor of love.”

“I’m a passionate aviator and passionate [ILD] aviator,” he said. “I’ve always had a personal dream of creating the smallest possible machine to do that with. I went through the hydrogen-peroxide phase and decided that 20 seconds was absolutely impractical, and the fuel was so exotic to make it unworkable.”

He partnered with engineer Nelson Tyler in 2006, and the pair began making real progress with a turbine engine design.

In 2015, Mayman flew around the Statue of Liberty in a demonstration of the JB-9 jetpack, making the first jetpack flight approved by the Federal Aviation Administration. A year later, Mayman and Tyler founded JetPack Aviation.

The company is now tackling a “long list” of requirements by SOCOM for the military ILD prototype, such as demonstrating that the jetpack can take off from a ship in certain wind speeds, Mayman said. The company’s ILDs are already capable of fulfilling many of SOCOM’s requirements, he said.

“I’m guessing we’re halfway through the list of things we agreed to cooperate on,” he said.

"Much of the work has been, ‘How do we make it fit in their vehicles?’ rather than change the characteristics of the machine itself,” he said.

The company is working on two prototypes for SOCOM. One is based on the JB-10 jetpack, which is referred to as “foot-launched” because a pilot bears the weight of the device.

“There is a limit obviously as to the weight a human being could carry,” Mayman said. “But for high-speed, small packages … it’s hard to beat a foot-launched system because they are so small and light.”

The prototype the company is testing right now is a ground-based device, which he likened to a two-passenger Jet Ski capable of a greater payload.

Perhaps most challenging is designing a workable, lightweight “bailout” system in the event the ILD malfunctions.

The company is working on a threefold recovery system, which would involve air bags for falls that are relatively low to the ground, he said.

“We’re looking at very, very rapidly deploying parachutes, but they are not much good under 120, 150 feet, depending upon your forward speed at the time,” he said.

“All of this adds weight, so that’s the real challenge,” he said. “We don’t want to end up with a Martin-Baker size ejection seat like in a fighter jet that might weigh 150 pounds, because that’s heavier than our entire aircraft.” Martin-Baker, with headquarters in the United Kingdom, is a top manufacturer of ejection seats.

Engineers are also toying with a so-called “zero-zero” ejection system capable of launching the pilot straight upward even at zero altitude and zero airspeed. The system would eject the pilot to a safe parachuting altitude.

The development agreement with SOCOM has led to further interest from the U.S. armed forces.

“We’re starting discussions with big Navy and some other elements of the U.S. Army,” Mayman said.

Although the company gets regular requests, it does not sell jetpacks to the public.

“Our focus is very much military and first responders,” he said.

There’s too much risk to the public and liability for the company in allowing just anyone to whisk at, say, 100 mph, 10 feet off the ground.

“The thing is, how the heck do we really know what use they’ll put them to?” he said. “It’s just impossible to keep track of how they’d be used.”