Rebekah Daniel and her husband Walt Daniel pose during happier times while living in Honolulu, Hawaii in 2009. Rebekah, known as Moani, died in childbirth at Naval Hospital Bremerton in Washington in March 2014. (Courtesy of Walt Daniel)

Rebekah Daniel and her husband Walt Daniel pose during happier times while living in Honolulu, Hawaii in 2009. Rebekah, known as Moani, died in childbirth at Naval Hospital Bremerton in Washington in March 2014. (Courtesy of Walt Daniel) 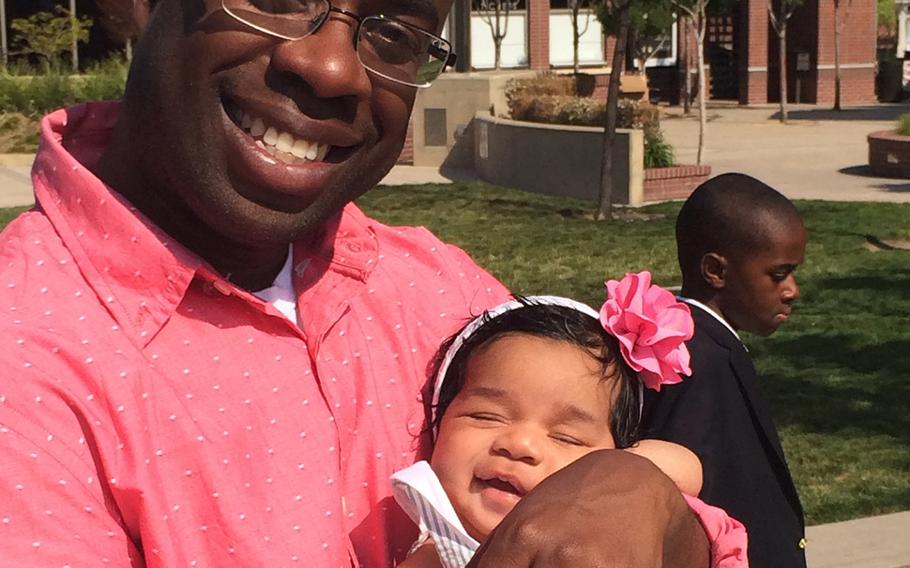 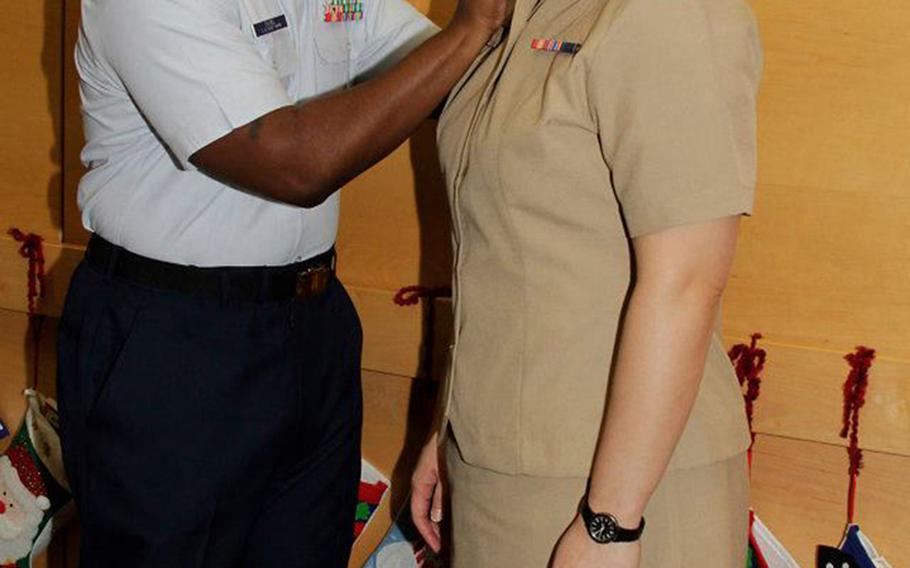 Walt Daniel, now a retired Coast Guard officer, pins the Navy lieutenant junior grade rank on his wife, Rebekah Daniel during her promotion ceremony in 2012. The picture was taken on the labor and delivery floor of Naval Hospital Bremerton in Washington, where she worked as a nurse and where she died in childbirth in March 2014. (Courtesy of Walt Daniel)

WASHINGTON — The U.S. Supreme Court has declined to hear a Navy lieutenant’s wrongful death case that looked to overturn a rule that bars servicemembers from suing the government for medical malpractice.

The case was on behalf of Rebekah “Moani” Daniel, 33, who bled to death after giving birth to a baby girl, Victoria. The so-called Feres Doctrine bars the Daniels and other servicemembers from seeking such legal recourse.

Though the court declined to let Daniel’s petition move forward, Supreme Court Justice Ruth Bader Ginsburg indicated she would have granted a hearing and Justice Clarence Thomas issued a strongly worded dissent to the court’s decision. Thomas wrote members of the military will continue to face obstacles to seek government compensation if they are injured while they serve.

“Such unfortunate repercussions – denial of relief to military personnel and distortions of other areas of law to compensate – will continue to ripple through our jurisprudence as long as the court refuses to consider Feres,” Thomas wrote in his dissent released Monday.

Coast Guard veteran Walter Daniel filed the petition to overturn the special legal shield known as the Feres Doctrine after his wife’s death at Naval Hospital Bremerton in 2014. She was a labor and delivery nurse at the same hospital where she died.

Monday’s decision comes on the heels of an emotional congressional hearing last month that saw several servicemembers and their families recount medical horrors through the military health care system with no legal recourse.

Daniel and his lawyers expressed disappointment with Monday’s news.

“Sadly, the justice system remains closed to our family, our colleagues and the families who commit their lives to military service,” the former lieutenant commander said in a statement. “Victoria and I won’t have the opportunity to learn what led to Moani’s death, and to ensure others don’t experience the same tragedy.”

The Feres Doctrine can be traced back to 1950 when the Supreme Court issued a ruling in Feres vs. the United States. Four years earlier, Congress had enacted the Federal Tort Claims Act allowing for citizens to sue the government for damaging acts of negligence. However, the court in 1950 — combining three cases of harmed servicemembers — determined the act was not applicable for military members “in the course of activity incident to service.”

Since then, the court has interpreted the Feres Doctrine to mean no active-duty servicemember can sue the federal government regardless of the circumstances.

“In our country, we rightfully revere servicemembers for their bravery and sacrifice,” Rep. Jackie Speier, D-Calif., said during an April 30 hearing on the doctrine. “It is disrespectful and shameful that for 69 years Congress has refused to give them the same rights as everyone else.”

Daniel’s Supreme Court petition was filed in October after the 9th U.S. Circuit Court of Appeals upheld a district court dismissal of the case. The 9th Circuit’s opinion appeared to all but call for a Supreme Court review.

“Lieutenant Daniel served honorably and well, ironically professionally trained to render the same type of care that led to her death,” Judge Michael Daly Hawkins wrote. “If ever there were a case to carve out an exception to the Feres Doctrine, this is it. But only the Supreme Court has the tools to do so.”

In December, the justices asked for a government response to the Daniel petition, raising hope that they were considering taking the case.

On Monday, Daniel’s attorney Andrew Hoyal said his legal team was grateful Thomas recognized the injustice of the doctrine in his dissent and Ginsburg would have granted the petition. Hoyal said the team knew the case would mark a long journey with tough odds, but were glad to spotlight the issue.

A legislative change through Congress seems to be the next step, said Hoyal of the Luvera Law Firm in Seattle.

“The United States Supreme Court missed a clear opportunity to re-examine Feres, especially considering the sea change that has occurred since the court last addressed its bearing on medical malpractice cases seven decades ago,” Hoyal said. “The legal underpinnings supporting this doctrine have eroded and shifted. The mission and nature of the Military Health System itself has been completely transformed. Our military personnel live and serve in a completely different world than when Feres was adopted, and it’s tragic that their legal rights have failed to keep pace.”

In the Supreme Court petition, Hoyal argued Rebekah Daniel was not engaged in her military duties at the time of her death or while she was being treated at Bremerton.

As Daniel and others have learned, there are only two paths to changing Feres: the Supreme Court and Congress.

If Daniel’s petition had been heard, it would have marked the first time the Supreme Court considered Feres in more than 30 years. Daniel said he received support from hundreds of servicemembers and their families along the way.

“The bright note I will share with Victoria is that her mother inspired our good fight and inspired so many others as well,” he said. “Our case and our fight is over – but it continues for other servicemembers.”

During last month’s congressional hearing on the doctrine, lawmakers heard stories of missed diagnosis that might have contributed to a Green Beret’s advanced, terminal Stage IV cancer, an airman’s routine appendectomy that turned fatal, and a judge advocate general who suffered multiple miscarriages following questionable care.

Army Sgt. 1st Class Rich Stayskal, who is battling terminal Stage IV metastatic lung cancer, and other servicemembers and families testified the Feres Doctrine has become a shield that protects doctors and nurses poorly treating servicemembers in U.S. hospitals far away from the battlefield.

This past year, Stayskal has lobbied Congress between bouts of chemotherapy to reverse the Feres rule.

“The hardest thing I have to do is explain to my children when they ask me, ‘This doesn’t make sense, how is this happening?’ And I have no good answer,” Stayskal told lawmakers in the April hearing. “I say ‘That’s why I am coming up here to help convince these folks in Congress to change this.’ This doctrine has effectively barred hundreds of servicemembers and their families any chance to be made whole for receiving negligent medical care.”

In his dissent, Thomas reiterated previous comments that “Feres was wrongly decided and heartily deserves the widespread, almost universal criticism it has received.” He added Congress has not indicated servicemembers can’t pursue legal recourse against the country, so the petition should have moved forward.

In the meantime, Hoyal said he and his team will continue to work the legislative route in hopes that Congress can overturn the rule.

“Walt and Victoria deserve the answers that are only accessible through our justice system. Moani deserves the honor and respect of a complete accounting for her tragic death,” he said. “Military servicemembers and families everywhere deserve the right to pursue legal claims for medical malpractice and to hold the federal government and Military Health System accountable for patient safety.”