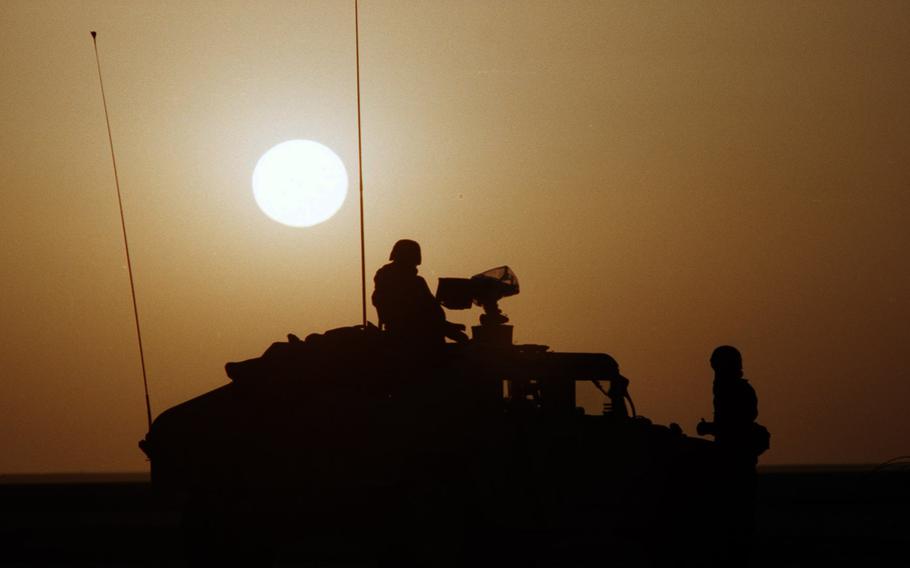 Buy Photo
American servicemembers are silhouetted against the desert sun during the Gulf War. (Rob Jagodzinski/Stars and Stripes file photo)

WASHINGTON -- A new study could provide new clues for doctors struggling to treat a mysterious illness that has affected tens of thousands of Gulf War veterans for decades.

The study, done with Department of Veterans Affairs funding in conjunction with Rutgers University, found that veterans suffering from Gulf War illness have damaged mitochondria, which can lead to chronic fatigue, one of the main symptoms reported by Gulf War veterans.

“The more we know about the type of (damage) and the more we can characterize the mitochondrial damage in these veterans, the better we can treat them,” said Michael Falvo, the study’s senior researcher and a faculty member of the VA War Related Illness and Injury Study Center in Orange, N.J. “The symptoms are so diverse and vary so much person to person that that’s been a challenging piece.”

Gulf War illness (also known as Gulf War syndrome) is a multi-symptom disorder characterized by chronic fatigue, muscle pain and cognitive problems. While many believe that toxin exposure is to blame, and one study found a possible link to anti-nerve agent pills -- toxic chemicals can damage mitochondria -- the exact cause of the illness is still unknown. Falvo warned that while the study could help find better treatment, it was unlikely to uncover the root cause.

“If I was a veteran experiencing Gulf War illness, I would want to know, too,” he said. “This many years after, that’s going to be a really difficult, if not impossible, thing to figure out.”

The study, undertaken by Falvo and Rutgers Biomedical and Health Sciences doctoral researcher Yang Chen, was based on blood samples from more than 30 Gulf War Veterans including about two dozen who suffer from Gulf War illness. White blood cells were separated from the samples and researchers were able to study the mitochondrial DNA for evidence of damage.

These are preliminary findings and the study will continue through the summer, with researchers hoping to present a final paper by the end of the year, Falvo said. A larger study will be needed to confirm the study’s findings, he said.

Twenty-five years after the U.S. sent forces into Iraq after Saddam Hussein’s invasion of his oil rich neighbor, Kuwait, many veterans are frustrated with the pace of research on Gulf War illness. According to a 2008 government report, at least one quarter of all Gulf War veterans have experienced symptoms of the illness, and the Pentagon and VA were slow to publicly acknowledge it. Many vets are still fighting to get their illnesses recognized as related to their service in the Gulf War.

Ronald Brown, president of the National Gulf War Resource Center, said he welcomes new research but similar small studies into the causes of the illness have rarely received funding for wider research, leaving the findings to languish unproven.

“We have piles of studies that show promise that are sitting on shelves, collecting dust,” he said.