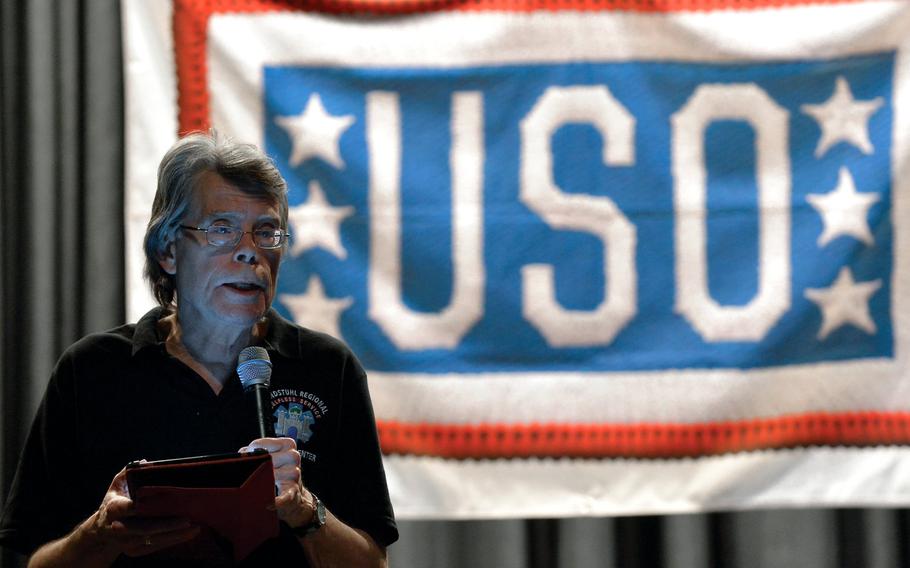 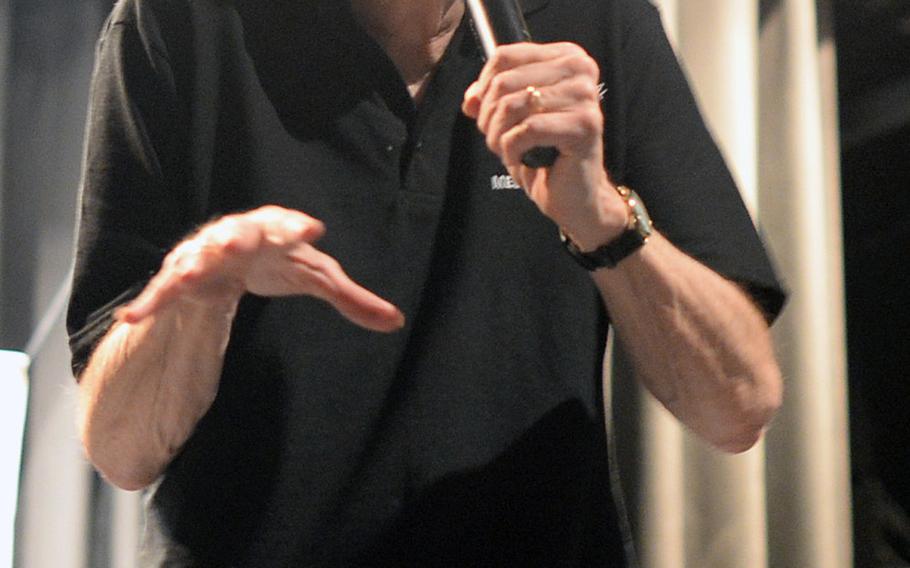 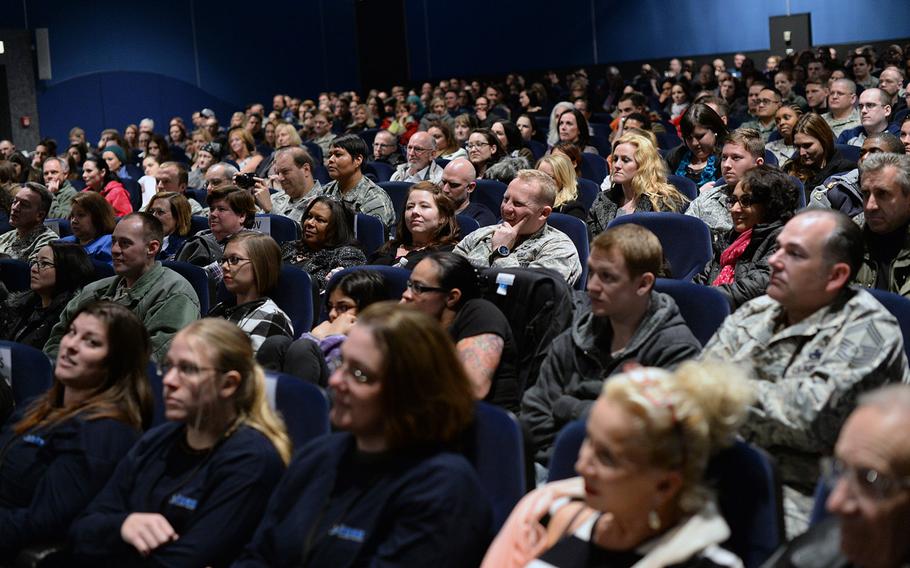 Buy Photo
Several hundred spectators, mostly military and family members, shared an evening with American author Stephen King on Monday, Nov. 18, 2013, on Ramstein Air Base, Germany. King came to Ramstein on his first USO tour and read from his new book, "Doctor Sleep," a sequel to "The Shining." (Jennifer H. Svan/Stars and Stripes) 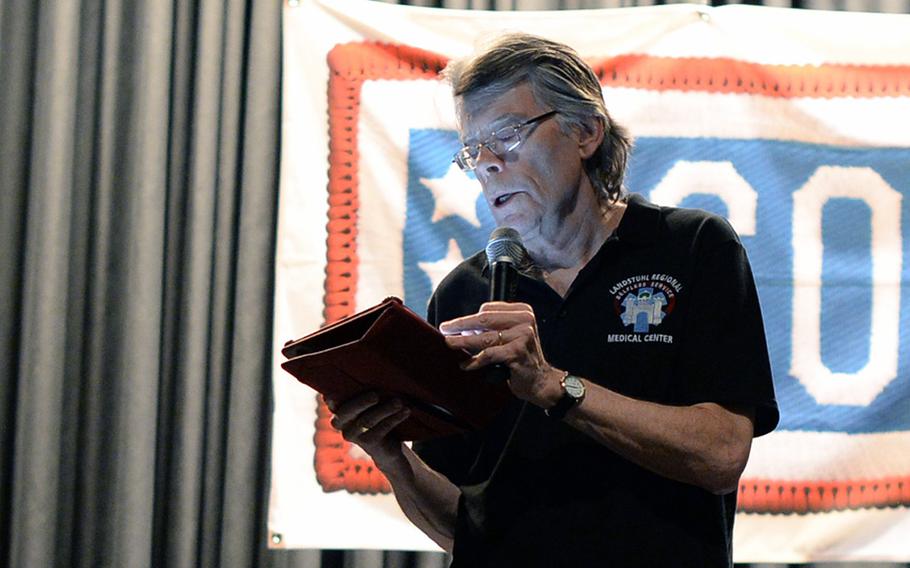 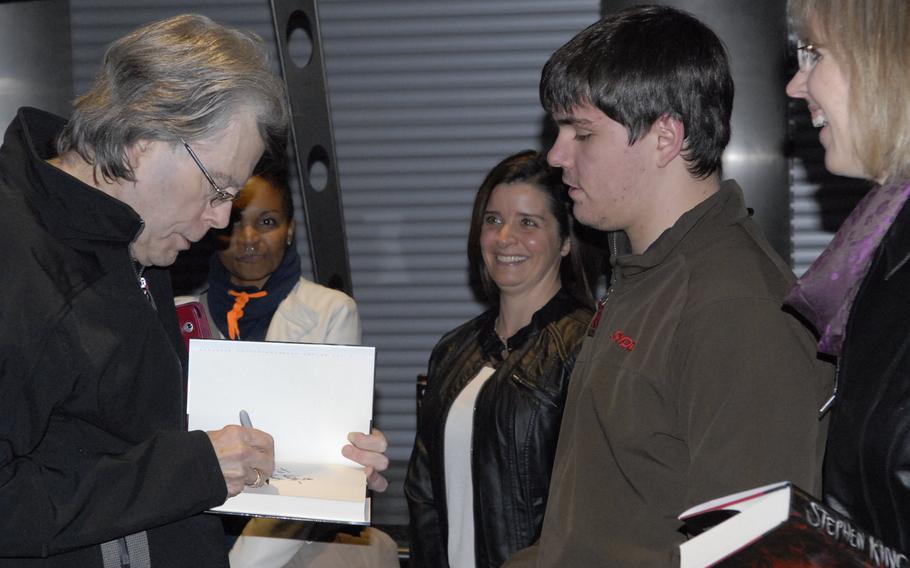 Buy Photo
Stephen King, American author of contemporary horror, suspense, science fiction and fantasy, signs a copy of his new book, "Doctor Sleep," for Andrew Bolton and his mom, Laura, right, prior to his book reading at Ramstein Air Base, Germany, on Monday, Nov. 18, 2013. The Boltons won tickets to the limited-seating event in an American Forces Network contest. (Jennifer H. Svan/Stars and Stripes)

From a foaming-at-the-mouth rabid dog to a demonic clown, Stephen King knows how to scare the living daylights out of readers.

But what sets America’s most prolific contemporary horror writer on edge doesn’t live in a small New England town or lurk under a bridge.

Before taking the stage Monday night at Germany’s Ramstein Air Base in front of several hundred military personnel and family members eager to see King on his first USO tour, the author candidly admitted to being terrified of “big audiences.”

“I’m a shy person; I’m a quiet person,” he said in an interview with Stars and Stripes. “If I was built to be a public speaker, I’d probably be a politician or a stand-up comedian … I’m very comfortable on my own, and when there are a lot of people I always feel a little bit nervous.”

If he was anxious in front of the capacity crowd inside the Hercules Theater, King never let on. He captivated the more than 350 spectators, regaling them for 90 minutes with comical stories about his life and experiences that sprung ideas for some of his most well-known fictional antagonists, from “Cujo” the rabid dog to Pennywise, the evil clown from “It,” the latter whom King dreamed up while driving over a bridge. King also read several excerpts from “Doctor Sleep,” his latest novel in which he brings back Danny Torrance, the young boy with psychic powers from one of his scariest yarns, “The Shining.”

“I met a woman backstage who said the smartest thing I ever heard,” King said, after casually strolling on stage in a pair of loose jeans and a black Polo shirt with a Landstuhl Regional Medical Center logo. “She said she read some of my books and then put a dead bolt on her closet, which I thought was a good idea, because that is where the monsters are.”

For King, 66, who’s imagined some of the creepiest “monsters” in modern fiction, it had already been a full day. Earlier, he had visited wounded servicemembers at Landstuhl and spent time with soldiers in the Army’s substance abuse program on post.

“I’m a recovered alcoholic and drug addict myself, and so it was a chance to talk to these guys and basically touch base with the problems that I cope with as a recovering person,” he said, “and that was great.”

King stopped at Ramstein and Landstuhl in between visits to Paris and two cities in Germany, where he was promoting “Doctor Sleep” on his first European book tour.

“I knew that there were writers like Harlan Coben who visited the troops, the wounded warriors, and so I asked if we could do it,” King said in an interview.

“Fantastic dedication” was how he summed up his impressions of servicemembers, particularly those he met at LRMC. “I saw some wounded soldiers and I saw the staff that takes care of them … and I heard about how they triage people on the battlefield downrange and how they bring them here and how excellent the chances are for people to get better.”

Though King published his first novel, “Carrie,” in 1974, long before many currently serving in the military were born, tickets to Monday night’s limited-seating event were in high demand, according to USO and base officials.

“A lot more interest for this than some of our other events we have, sporting events, what have you, which is a little surprising,” said Bret Helenius, 86th Force Support Squadron marketing director. “I had phone calls for the last two weeks, 20, 30 a day, and that’s just my personal line. All the seats were taken.”

Officials said the Hercules was better suited for King, who prefers a more intimate setting, than a larger venue.

Most of the 384 free tickets to the event were distributed through military organizations on Ramstein, with units getting a certain percentage of tickets based on their staffing size. About 20 lucky fans, who waited outside the Hercules on Monday hoping for a seat, got in since there were a handful of no-shows.

“My mom got me into Stephen King,” he said. “My grandfather actually burned her entire collection. He’s very religious; he thought they were satanic. My goal was to get a signed book for my mother for a Christmas gift.”

Jung got that book for his mom. King donated about 400 signed hardback copies of “Doctor Sleep,” which were given out to attendees as they left the theater Monday.

Staff Sgt. Joseph Atkins, 32, and Tech. Sgt. Cecilia Cardenas, 30, airmen assigned to the Deployment Transition Center at Ramstein, said their first sergeant surprised them with tickets after finding out the airmen were Stephen King fans.

Cardenas said she enjoyed hearing King “talk about his own personal experiences. It was amazing, and the fact that he’s really funny, too.”

For Atkins, King’s animated reading of excerpts from “Doctor Sleep” as he restlessly moved across stage, sometimes sitting, sometimes standing, was the highlight of the evening.

“I heard him on audio book before, but watching him physically read was actually really cool, really nifty,” said Atkins, whose favorite King book is from The Dark Tower series.

Army spouse Melissa Werner, 39, of Baumholder, said she’s read all of King’s books, starting with “Christine” — about a 1958 Plymouth Fury of the same name with a mind of its own — when she was 10.

“I’ve been a fan ever since,” she said. “This has been really extraordinary. He’s very down to earth and real — just to listen to him talk, like everyday conversation. That’s what I expected and that’s what he gave, and I’m just thrilled to be a part of it.”

With more than 50 books to his credit, King told the audience he’s often asked from where he gets his story ideas.

“I used to joke about that. I used to say, ‘Well, there’s a little used idea shop in Poughkeepsie and I get them all there,” he said, referring to a small New York city with a funny-sounding name.

“There’s really no one place that ideas come from,” he said.

People are surprised to hear that his childhood was “perfectly ordinary,” King shared, though he was always drawn to stories of “fantasy and the imagination.”

His story ideas tend to start with a “what if” scenario.

While sitting in a van last week on a congested street in Paris, his mind wandered: “What if there was a man sitting in a van or a taxi cab in a strange city and a bus pulled up. He looked into it and he saw a man and a woman and the man cut the woman’s throat. Now you could say, Steve, that idea’s really … weird, and I would agree with you, but there’s a story there, and when I get back home, I’m going to try and write it.”

King related how, in the 1970s, he encountered a growling Saint Bernard at a garage in the Maine backwoods, after the engine on his Honda 500 motorcycle died as he pulled into the driveway. “You know how they look,” King said of the dog. “They look like they’ve got shaving cream all over their mouths; they’ve got these kind of droopy eyes with gunk in them and everything.”

When the dog lunged for his leg, the mechanic whacked the animal on the hindquarters with an adjustable socket wrench.

“The guy never apologized,” King said. “He just said, ‘I guess Buster don’t like your face.’ ”

On the drive home after his bike was fixed, King dreamed up “Cujo.”

King came up with the beginnings of “It” in a car while driving across a bridge in Boulder, Colo., he told the audience Monday.

The thought occurred to him that “anything could be under this bridge. Anything at all,” he said. “I thought of that nursery rhyme, about the three Billy Goats Gruff, ‘who’s that trip trapping on my bridge?’ ”

“I thought, well, what’s the scariest thing that could possibly be under that bridge, and I thought ‘an evil clown,’ ” he said.

The television movie based on the book, starring Tim Curry as Pennywise the clown, “scared a generation of children,” King said. “They’ve grown up now, but they still have that clown thing going on in their heads, and they say the scariest thing was that clown, and I say ‘Right on, bro. That’s my clown.’ ”