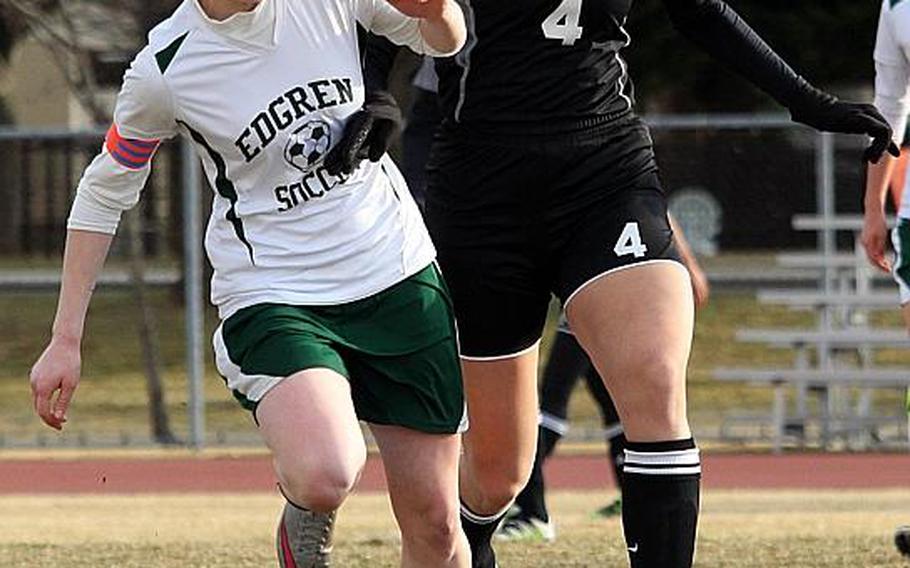 Edgren's Lizzy Long, left, and Zama's Georgia Tsitiridis chase the ball during a soccer match last week. Tsitiridis and fellow sophomore Rachel Norton have combined for 22 goals this season for the Trojans, who take on Matthew C. Perry this weekend. (Caitlin Blount/Special to Stars and Stripes)

They’re the best two DODEA-Japan girls soccer teams based on win-loss record. One has the Pacific’s top goal scorer on its roster, the other has the second most-prolific scorer on its.

Zama and Matthew C. Perry girls soccer teams go at it this weekend, one match on Friday, the other on Saturday at Kuga Field, a turfed facility about 40 minutes’ driving time from the Samurai’s home Marine Corps Air Station Iwakuni.

“It’s going to be pretty tough. It definitely won’t be easy. A continuous fight, both halves,” said George Tarleton, the first-year coach of the Samurai.

They take a 7-0-2 record into this weekend’s showdown, with junior striker Bobbi Hill leading the way with 21 goals. Senior midfielder Naomi Ziola pitches in with eight goals and two assists and junior midfielder Sakura Fleming has five goals.

Sophomore Rachel Norton leads the Trojans (7-0-0) with 16 goals plus four assists, and fellow sophomore Georgia Tsitiridis has six goals plus four helpers. They get help in the middle from juniors Natasha Hunter and Amanda Stephens and senior Loea Richardson.

“We have other players who are doing well and our defense is holding steady,” Duarte said.

They’ve had to replace steady hands both front and back: Megan Hurley, who led the Pacific with 43 goals, and three-year starter at keeper Noralisa Steiner.

“It’s a team effort at Zama,” Duarte said, pointing to Stephens, who “has a lot of potential,” and Tsitiridis, who’s just in her second year of soccer but brings “athleticism. She’s picked it up quickly. She’s a competitor,” Duarte said.

In goal, Saige Rivers and Reagan Palmer are “kind of sharing duties right now,” Duarte said. “I’m pleased with their progress (but they) still have a long way to go.”

Hill primarily plays up front for the Samurai, but can drop back and play defense to help the team protect a lead. “She’s a formidable person either way,” Tarleton said.

Ziola and Fleming bring a “nice balance to the left and right, being able to cross (the ball) and feed it into somebody to shoot. They have a nice amount of speed, a good, stable force,” Tarleton said.

With rain forecast for the weekend, Samurai boys coach Mark Lange reserved the field at Kuga. He has connections there, and the Samurai teams have played before. A handful of matches in the last two Far East Division II boys tournaments were played there.

Elsewhere, the first inter-district soccer matches of the season take place Friday and Saturday at Yokota. It welcomes Kubasaki of Okinawa along with Edgren of northern Japan and St. Maur’s boys and girls teams from Yokohama. They play a weekend series at Yokota’s Bonk Field.