Zama gridders gird for next challenge: staying on top 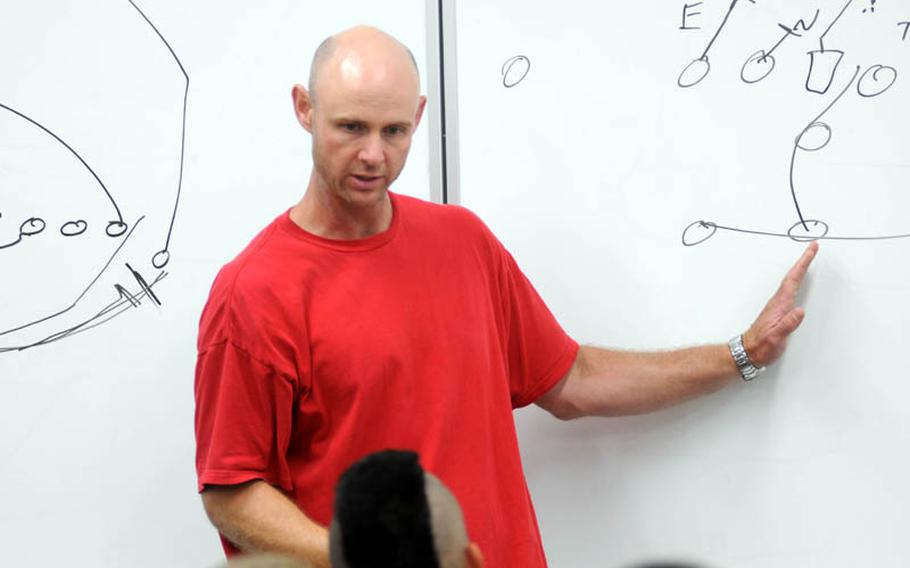 That the Trojans now sport bull&rsquo;s-eyes on the front and back of their jerseys is challenging enough. But they&rsquo;ll begin defense of those titles with a core of just three players who won those crowns last year, and the rest of the roster populated with many youthful players as green as grass.

&ldquo;It&rsquo;s more challenging than it was last year; we don&rsquo;t have the experience,&rdquo; said fourth-year Zama coach Steven Merrell, who counts as his three veterans senior running back Michael Spencer, junior center Roland Cote and senior Matt Cole, who takes over at quarterback for departed Michael Jorgenson.

Spencer may have racked up a school-record 1,154 yards and 12 touchdowns on 172 carries. But that wealth came partly as a result of a veteran line; now, Merrell faces the tough task of replacing four of those five linemen.

Despite that daunting task, what Zama football does have, which it never had before, is a higher expectation, Merrell said.

&ldquo;In the past, we&rsquo;ve had all that coach-speak about how we can do this, we can do this,&rdquo; he said. &ldquo;But they&rsquo;ve seen it now. Even the inexperienced guys have seen it. And they know things can happen. Things can come together. And we can succeed.&rdquo;

Just possessing an extra bounce in their step, thanks to that Far East championship banner now populating the gym, won&rsquo;t get the job done by itself, Merrell said.

&ldquo;I don&rsquo;t know how soon it will come together, but we&rsquo;ll have to keep working on it. That&rsquo;s all we can do.&rdquo;

Nipping at the Trojans&rsquo; heels will be Yokota, fresh off its least-decorated season in coach Tim Pujol&rsquo;s 11 seasons at the helm &ndash; for the first time, his Panthers won neither the JFL nor the Kanto Plain Association of Secondary Schools title.

However, Yokota, which finished second in last year&rsquo;s Division I playoffs, enters the season with the most home-grown players in Pujol&rsquo;s reign, a squad replete with leadership and hunger, he said.

Nile C. Kinnick also has a new head coach, Daniel Joley, who comes to Yokosuka Naval Base from North Side High in Fort Wayne, Ind. His task: to build from the ashes of a 1-8 season in which the Red Devils went winless in both JFL and Kanto.

Defending Kanto Plain champion American School In Japan, despite losing 18 starters, looks primed to chase a second straight league title, with junior Hayden Jardine back at quarterback and a bevy of returners and JV move-ups to fill the vacancies. Craig Karnitz moves up from JV to coach the varsity.

No matter whether Kinnick goes unbeaten or winless in the regular season, the Red Devils can still win a Far East title. Kinnick on Oct. 16 hosts Seoul American in a &ldquo;play-in game,&rdquo; with the winner grabbing one of four berths in the Division I playoffs Nov. 6-13 on Okinawa.

Zama for the first time will play an interarea contest, hosting Kadena of Okinawa on Sept. 18 in what will be billed as the showdown between last year&rsquo;s Divisions I and II champions.

&ldquo;We welcome the challenge and we&rsquo;ll see what we can do,&rdquo; Merrell said.