Youth being served across Pacific sports Jes Cabella, a freshman, is starting for Seoul American Falcons baseball as an infielder. (Thomas Kim/Special to Stars and Stripes)

Jes Cabella, a freshman, is starting for Seoul American Falcons baseball as an infielder. (Thomas Kim/Special to Stars and Stripes) 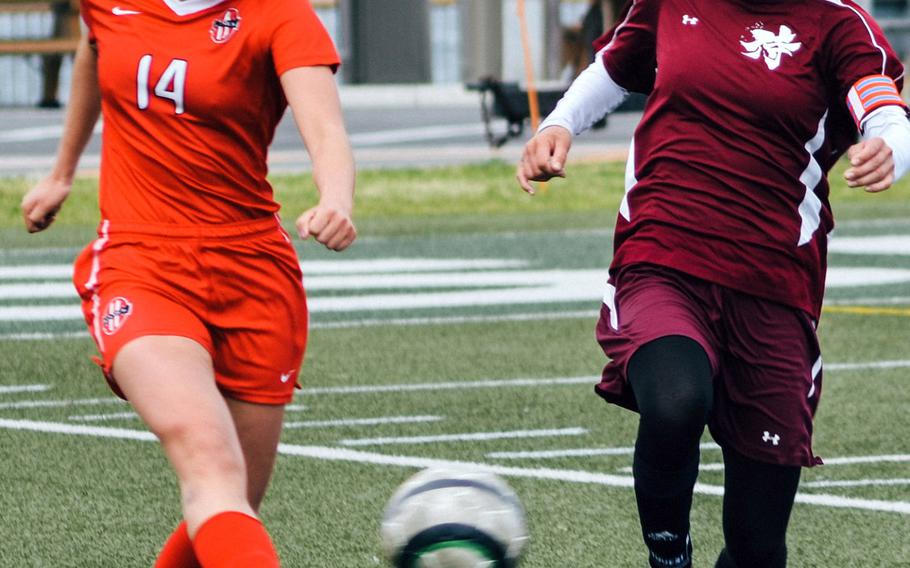 Macalah Danielsen, a freshman, starts at shortstop for Kadena Panthers softball and is one of the team's leading hitters. She played club/travel ball in the States before arriving last year on Okinawa and also trains with the Lady Ambassadors club program. (Dave Ornauer/Stars and Stripes) 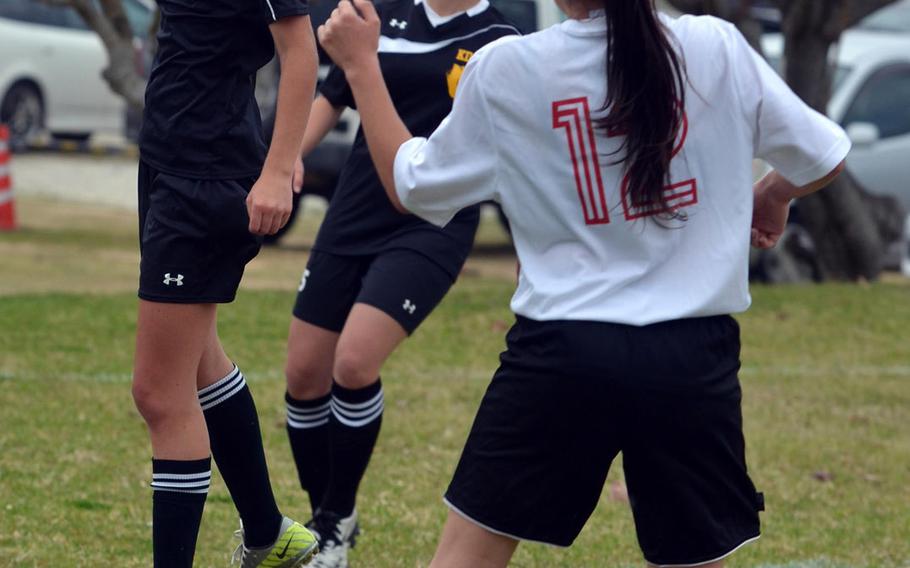 Kadena Panthers freshman Ally Strauss, shown going up to head the ball against Okinawa Christian International, starts at forward and has four goals this season, including three in this match last week, a 3-2 win over the Crusaders. (Dave Ornauer/Stars and Stripes) 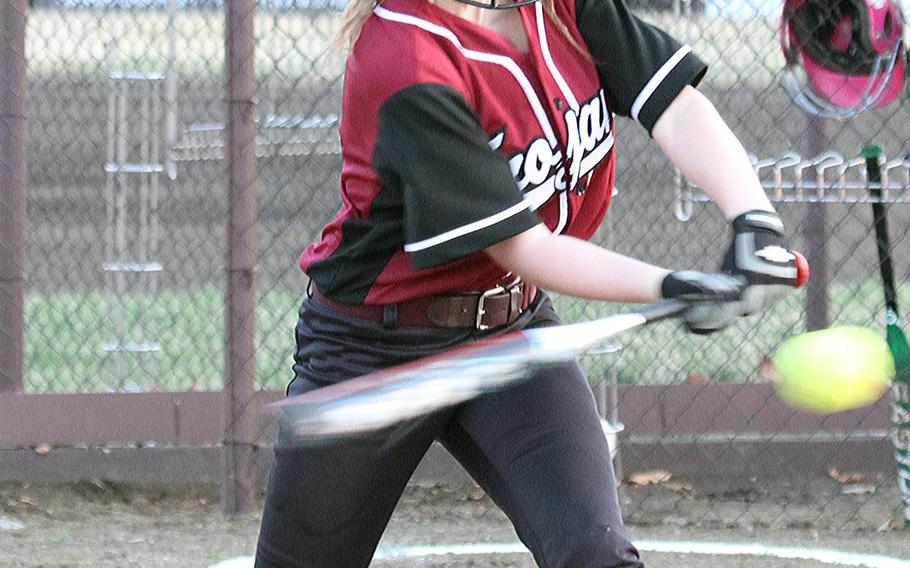 Heather Hurley, a freshman, is a starting pitcher and infielder for Zama American Trojans softball. (Kayla Bodwin/Special to Stars and Stripes) Sheina Staley, a freshman, is a starting catcher for Zama American Trojans softball. (Kayla Bodwin/Special to Stars and Stripes) 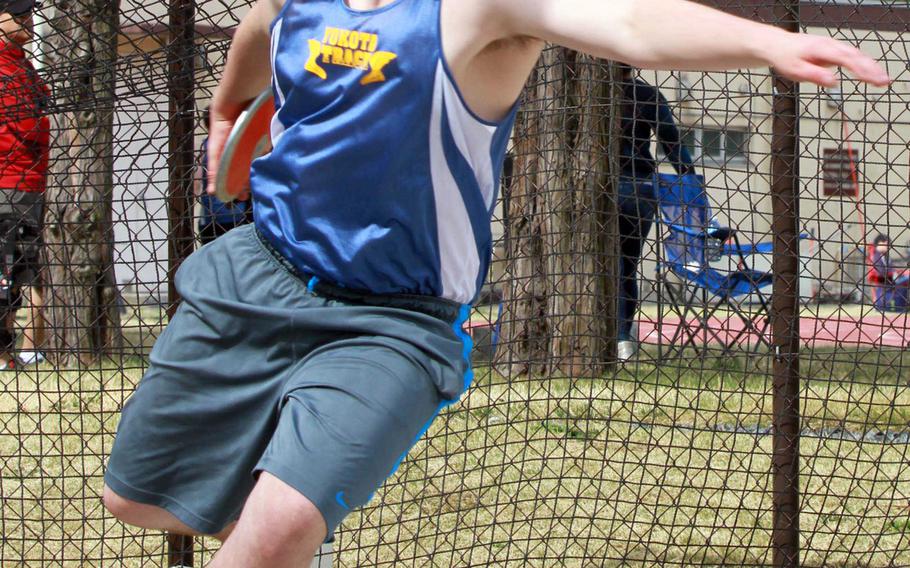 Christian Sonnenberg, a freshman, leads DODDS Japan discus throwers with a throw of 41 meters and is unbeaten this season in two meets. (Tyler Espinoza/Special to Stars and Stripes) 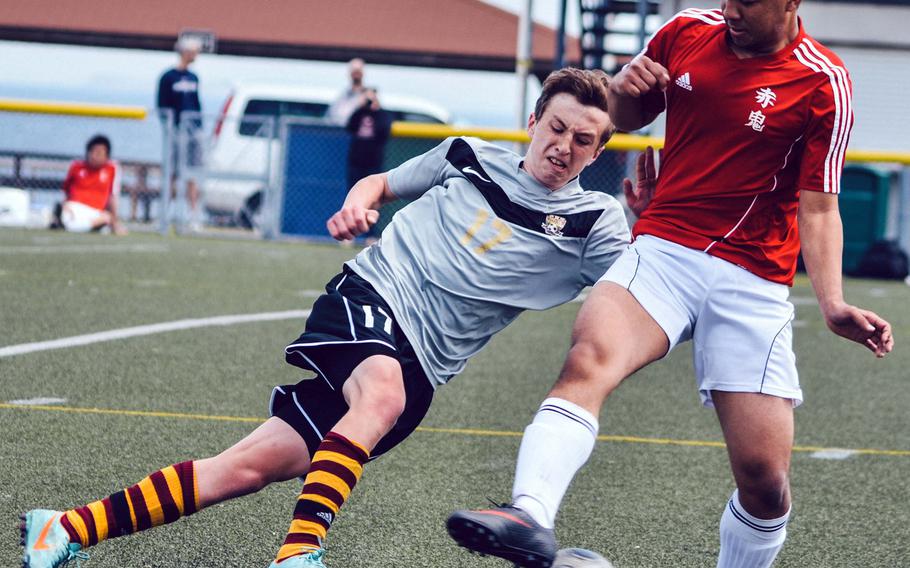 Aidan Lewis, a freshman shown scuffling with Nile C. Kinnick's Murphy Royal for the ball, is a starter for the Matthew C. Perry Samurai boys soccer team. (Anju Yamanaka/Special to Stars and Stripes) It can be tough enough for a freshman just to make the roster of a high school varsity sports team, much less bear the burden of playing a major role on that team.

Yet throughout the Pacific this season, first-year players are positively thriving.

“They’re wonderful,” Collins said of her freshmen triad, adding that Staley is “stopping everything” behind the plate and “you can tell Heather has played. She’s confident on the mound. They’re getting better and better every game. And they can hit. All three are hitters.”

For the Falcons, Weaver, in particular, “looks like she’s been at it awhile,” coach Julian Harden said. “She’s a gifted athlete, she has that enthusiasm, that drive, that attitude that coaches look for that made me say I’ll find a place for her on this team.”

While most freshmen confess to nerves, as Strauss said she was before Wednesday’s 1-0 loss at Kubasaki, others seem to relish the challenge, such as Dragons freshman keeper Kelliana Rios.

She was moved up from JV to replace starter Harleigh Lewis, who had been red-carded in her previous match and had to sit out Wednesday’s match. And Rios came away with a clean sheet and “no worries at all. No pressure at all.”

On the other side of the spectrum are those coaches starting freshmen simply because they otherwise would be short of players.

“They are the glue that keeps my team together,” Daegu baseball coach Michael Downes said.

“If I didn’t have five or six players who only have (youth services) experience, I wouldn’t have a team,” said coach Rich Walrath of first-year girls soccer program Humphreys.

While Kaylee Spielman came from Texas and played for 10 years and Isabella Nocera came to Humphreys from Heidelberg Select in Germany, “a number of my freshmen do not have experience,” said Walrath, who has been coaching military and high school teams for 20 years.

“I look at what we do in DODDS as … developmental. It gives them the opportunity to develop skills, fall in love with the game I fell in love with in the 1970s in Germany, develop confidence and do things other than hanging out, Facebook, whatever young folks do these days.”

The numbers of freshmen athletes with prior experience in clubs or youth sports coming to DODDS high schools in recent years has risen, but it’s not across the board and it can create a wide gap between veterans of their sports and those starting out, coaches say.

Many club veterans “make a year-round commitment to soccer at an early age (and) are the ones who can make an easy transition to DODDS soccer,” said Mike Callahan, who coaches his freshman son, Junta, at Kadena. Junta matriculated in Okinawa’s FC Ryukyu youth academy.

Such programs “give kids confidence and gives them the technical skills to move forward in the tactical and strategic portions of the game,” Walrath said.

But not everybody is so blessed in the Pacific. “We keep our fingers crossed during the summer and PCS shuffle, hoping for the best,” Zama boys soccer coach Marc Norton said.

He has one player, Roman Duarte, who played Florida club ball. “Since he’s had tens of thousands more touches … he is better developed” than his Trojans teammates. Unless more club veterans PCS in or Zama is allowed to play Japanese teams, “I don’t expect our level to increase.”

Still, the presence of freshmen in the lineup can have other qualitative benefits, coaches say. They’re sometimes more coachable than experienced players

“They are a reminder to the ‘vets’ that they cannot just … coast through the season – there are some really hungry players out there who are willing to work into becoming better players,” Nile C. Kinnick boys soccer coach Robert Tiffany said.

“They tend to play more precisely and securely. They receive the ball, look for options and pass. Solid basic ball. They are also sponges – they will absorb as much as I can throw at them.”

All that, plus on-field performance thus far this season have created cause for optimism for coaches. “This year looks like a good one for Zama softball,” Collins said.