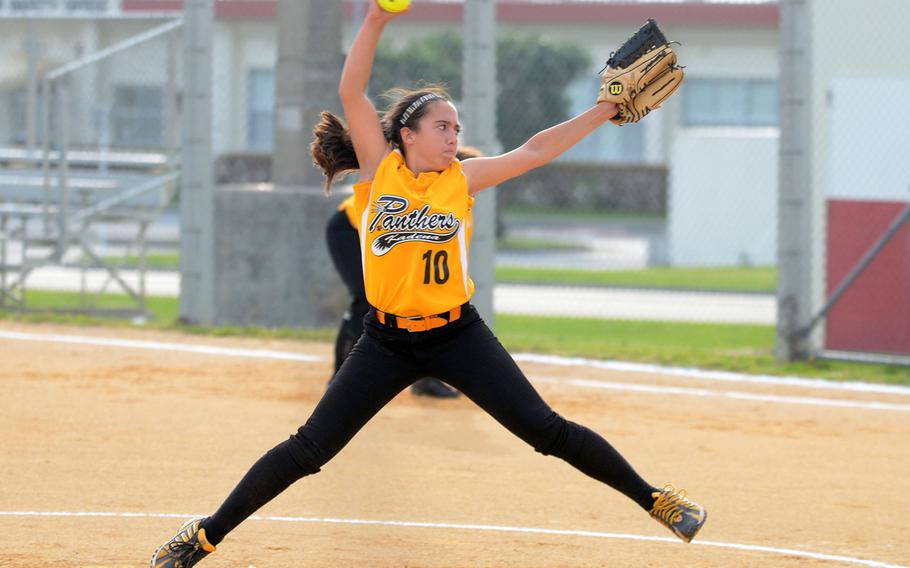 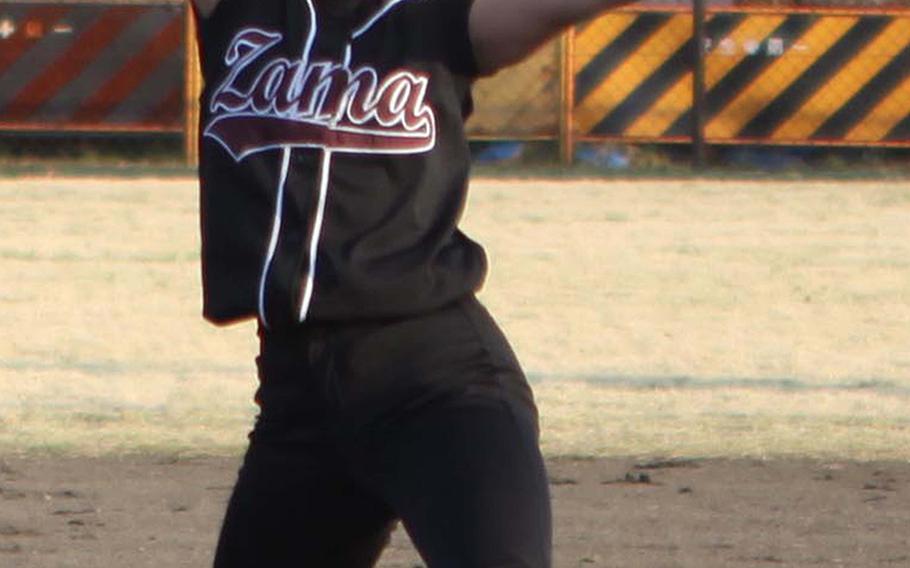 Zama American freshman right-hander Joelena Ragunton is one of a handful of underclassmen starting for the Trojans this season under first-year coach Adele Collins. (Todd Carver/Special to Stars and Stripes)

They’re all freshmen, but it’s not like they haven’t played the game before.

But on March 15 at Yokota’s Headley Field, things changed, when reigning Far East Division II champion Zama battled Kubasaki and Kadena — the top two schools in Division I a year ago — and the freshmen found themselves playing at a more intense, fast-paced level.

Each said it was like going from a bicycle to a race car.

“The other teams are better and they know what they’re doing,” first baseman Prince said.

“The intensity and the amount of work” is greater, Zama pitcher Ragunton said. “Youth ball is about developing; high school is about execution.”

Kadena needed an eight-run sixth inning to rally from an 8-2 deficit for a 12-10 win over Zama, which later downed Kubasaki 8-6.

The numbers vary from team to team, but DODDS-Pacific softball teams this season field an unusually large amount of underclassmen who start as pitchers, catchers, corner infielders and hit in the heart of the batting order; Prince bats third and Abdul fourth for the Panthers.

Many learned the trade as middle schoolers. Still, they’re young, and coaches say it’s a matter of knowing when to put the pedal to the metal and when to let up. Coaches have to assess when underclassmen are performing up to or above par and when they might be in over their heads.

“All of them are developing,” said Kadena second-year coach Kelli Wilson, who played at Hutchinson (Texas) Community College. “Yes, they know the game, but there’s a huge difference between youth sports and a returning Far East championship team.”

Communicating effectively might be the most important part of the equation, several coaches said.

“We try to be very honest with the girls, about where they are as players and what we expect out of them,” said Daegu coach Ken Walter, who starts two sophomores, Reyna Labarrete (second base) and Aaliya Scott (third) and freshman first baseman Rheagan Wyche.

“They have expressed that even though [constructive criticism] is upsetting at times, they would rather know the truth and know it as early as possible.”

At the same time coaches impart knowledge, praise and criticism, so, too, must coaches listen to what’s on their players’ minds.

“We make it clear that we respect what they have to say and feel,” said second-year Seoul American coach Yunhui Danforth, who played for the team in the 2000s. “We try to make it a personal goal for the players to also express what they’re feeling and be forward enough to say, ‘This is too much.’ ”

Most coaches say they view their teams as family and treat their players as such.

“I’m hard on them, because I know they can do it and have been given the tools to do it. I push my kids hard. However, I reward my kids a lot,” Wilson said about such things as movie nights, scavenger hunts, free days, candy surprises and gifts.

“She’s like an energizer, she keeps on working regardless of mistakes, never feels sorry for herself,” coach Sarah Richardson said. “She can take constructive criticism and use it to her advantage.”

While most players have some level of experience — Danforth starts six sophomores and two freshmen, all with youth ball schooling — some teams have no choice but to go with inexperienced players, such as start-up Matthew C. Perry of Japan under coach Kevin Peterson.

He starts three freshmen and three sophomores on a team with just one experienced player, shortstop Kim Albright, a transfer from New York. Despite that, his Samurai have won two games in their first year as a varsity program.

“They are exceeding my expectations so much that occasionally when they do make an error, it catches me by surprise and I have to remind myself that they’re so new and young,” he said. The team’s pitchers and defense struggle at times, but like a fledgling prize fighter, “they still keep coming back.”

When things get overwhelming or intense, Peterson says he allows his players to hold up a finger “and that would let us know to give them a minute to calm down. They know that doesn’t let them off the hook, but it gives them a chance to get ready to receive the correction or let the mistake go.”

Some coaches say little maintenance is needed to keep the engine purring.

“I don’t worry about the players’ grade level,” said coach Katrina Kemper of unbeaten Nile C. Kinnick, which starts a freshman and three sophomores. “I take the best I have and put them on the field. There are times when upperclassmen play like freshmen and freshmen play like seniors.”

Those on a defending Far East champion face a two-edged sword, the pride of being part of greatness, but the pressure of defending it. “I think about it a lot,” Abdul said. “You don’t want to ruin it for your team at Far East.”

As a freshman, Zama right-hander Brooklinn McElhinney helped fuel an unbeaten playoff run that led the Trojans to the D-II title. Ragunton said she’s prepared for something similar, if needed, that she knows what to do and how to make certain situational pitches.