Young hoop players get off to strong starts 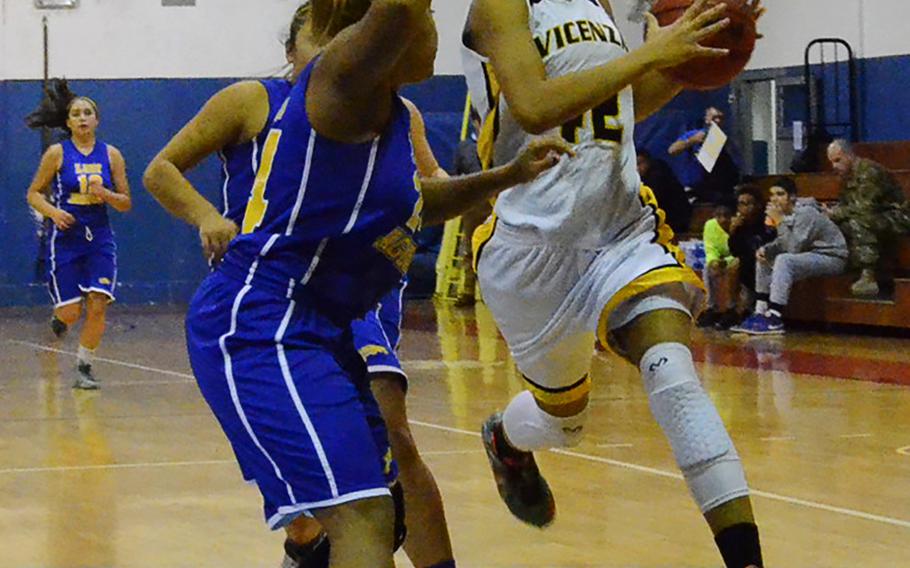 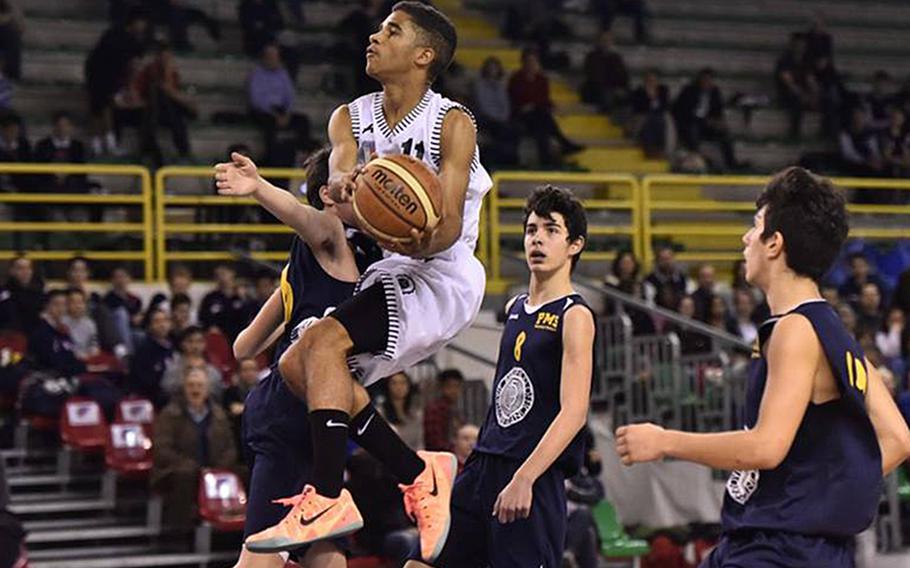 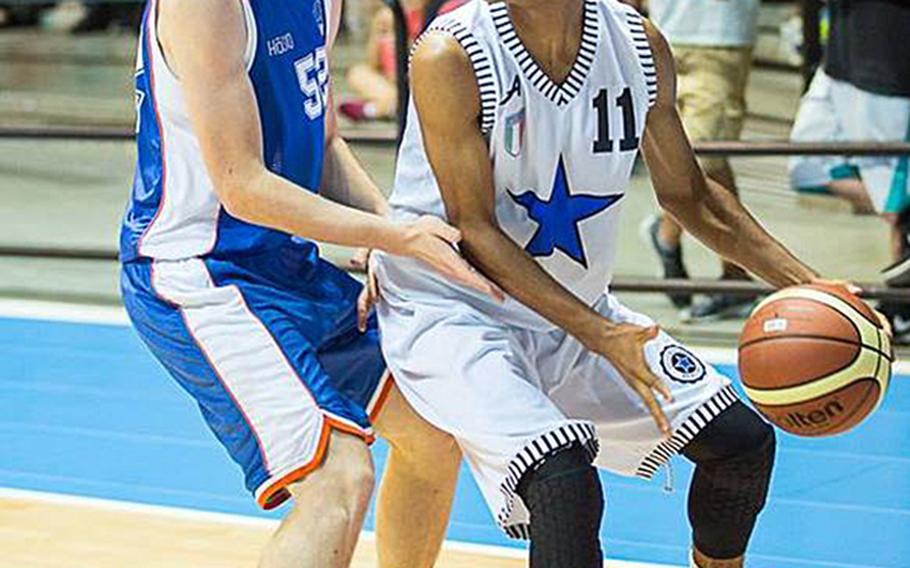 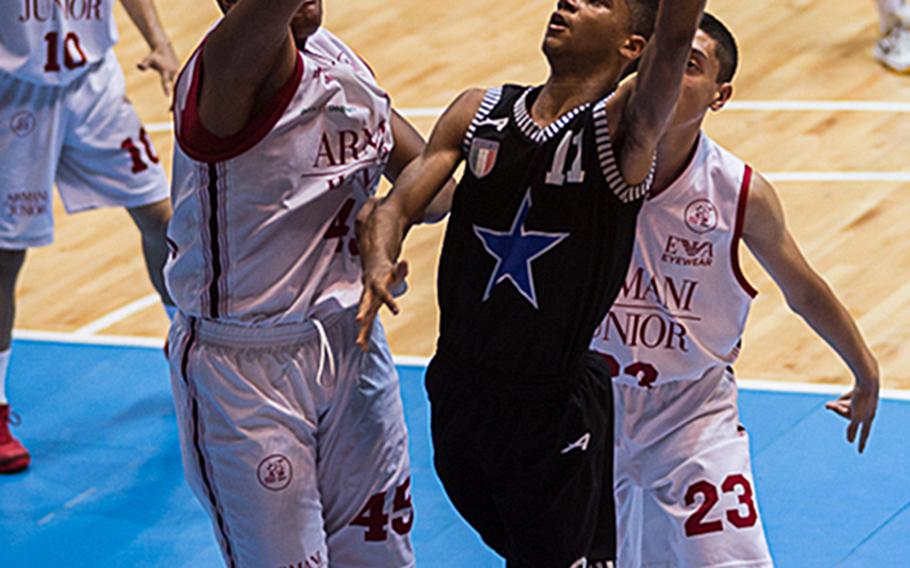 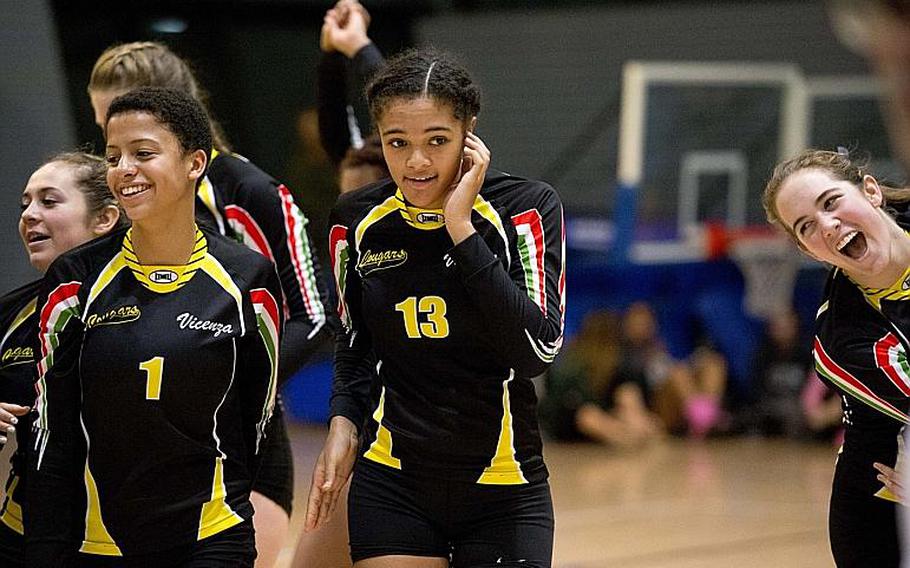 Jordan Wakefield, center, and the Vicenza Cougars celebrate after defeating the Wiesbaden Warriors during a DODDS-Europe volleyball championship match at Ramstein Air Base, Germany, on Friday, Nov. 6, 2015. (Michael B. Keller/Stars and Stripes)

Then they went out and provided the answer.

Laffitte, a 6-foot-1 point guard at Marymount, and Wakefield, a 5-11 guard at Vicenza, emerged as the breakout stars of the opening weekend of the 2015-16 DODDS-Europe basketball season with brilliant debuts in two-game sweeps for their respective teams. Laffitte scored 26 and 46 points in two Marymount wins over Aviano, while Wakefield scored 20 points in each Cougar defeat of Sigonella.

Even the players themselves were taken aback by their immediate stardom.

“I was surprised,” Laffitte said. “I thought I was going to come in and pass the ball.”

Wakefield, the newest addition to an experienced, contending Division I team, was thrilled to slide right into a sizeable role.

“I didn’t expect it to turn out like that,” Wakefield said.

While the two freshmen headlined the first weekend of DODDS-Europe hoops action, they have more in common than a simultaneous star turn.

Both have fathers who enjoyed success in their own basketball careers. Both fathers eventually turned to coaching, and both are currently coaching their own young phenoms.

Demetrius Laffitte played at Long Beach State and earned a summer-league opportunity with the NBA’s Portland Trail Blazers before embarking on an international career that took him to locales across Europe and South America.

Immersed in basketball, Dominic took to the sport early.

“When he was young, Dominic always had a basketball in his hands,” Demetrius Laffitte said “He was always around the game of basketball.”

When Laffitte took over as head coach at Marymount last year, eighth-grade Dominic played for a local Italian team but was ineligible for his dad’s high school squad. This fall, the two have combined their efforts.

“He’s been coaching me since I started basketball, since I was five years old,” Dominic Laffitte said. “I know what he does, and I know he knows how I play.”

Eric Wakefield played collegiate ball at William & Mary and looked forward to the day his daughter would express an interest in the sport. But the athletic youngster took her time finding her way to the basketball court, finally focusing on the sport around her sixth grade year. Around the same time, her father was finding success as the head coach of the Vicenza boys team, eventually leading the Cougars to the 2014 Division II European championship.

The elder Wakefield stepped away from that program to assist with his daughter’s local Italian club. Then, as with the Laffittes, their DODDS-Europe opportunities overlapped: Jordan began her freshman year, while Eric assumed co-coaching duties for the Cougar girls team alongside former Menwith Hill coach Gregory DeJardin.

“When it was time for her to play basketball for the high school, I said, ‘Hey, let me help out here,” Eric Wakefield said.

The news is only good through the first weekend of each young player’s high school career. Still, both freshmen understand that their situations are unusually delicate.

Laffitte is the new centerpiece of a program that won just two games in its 2014-15 DODDS-Europe season. The dynamic guard is trying to find a balance between respecting his more tenured teammates and delivering the offensive upgrade they badly needed.

Laffitte’s teammates have been supportive, the freshman said. Lotanna Mba, a senior forward who is also a centerpiece of Marymount’s championship-winning soccer program, encouraged his younger teammate not to hold anything back. The freshman’s 46-point outing Saturday is the inarguable result of that approach.

“I felt confident with my shots,” Laffitte said. “My teammates were helping me. They showed me how to become a better player.

Jordan Wakefield, meanwhile, stepped onto a roster that can certainly use her contributions but already had a very competitive squad in place. The freshman is content to pick her spots offensively, knowing that not every game will play out the way that first charmed doubleheader did.

“She just went out there and played. There weren’t any expectations going in. We just told her to play smart and play hard and have fun,” Eric Wakefield said. “It can be anybody’s night at any given time. It just so happened that it was her night.”

But choosing a pass over a shot is easy compared to the more subtle dynamic of taking on a leadership role for the Cougars. While Wakefield’s obvious talent makes hers a credible locker room voice, her age can undermine its impact.

Wakefield began the process of fitting in as a member of the Vicenza volleyball team in the fall. She helped the Cougars - featuring many of her current basketball teammates - to the Division I European championship match. Still, it’s an ongoing effort.

“Sometimes it is difficult being the freshman and nobody wants to listen to you,” Jordan Wakefield said.

The most direct answer to this predicament, as both Laffitte and Wakefield discovered last weekend, is simply to play up to their considerable potential.

“I’m a freshman,” Laffitte said. “But I want to show people that I can play basketball.”