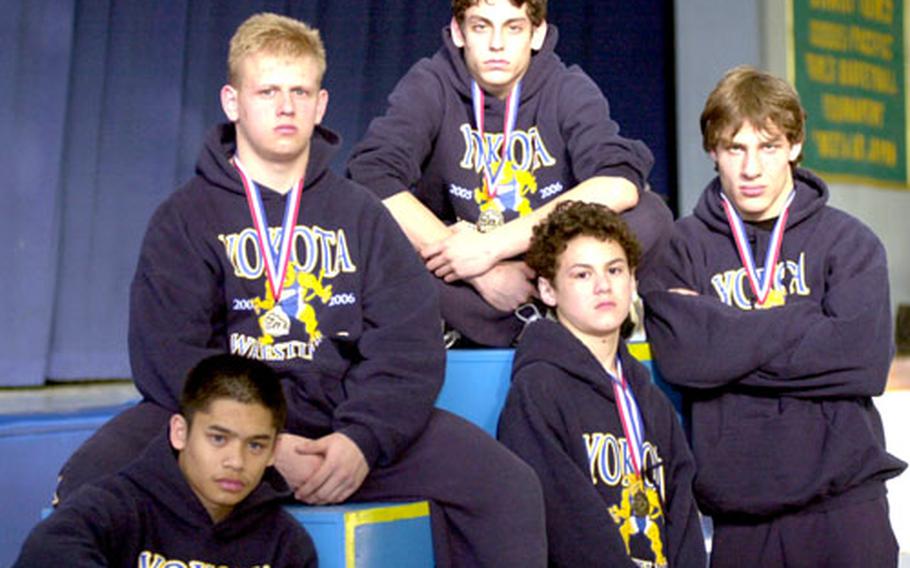 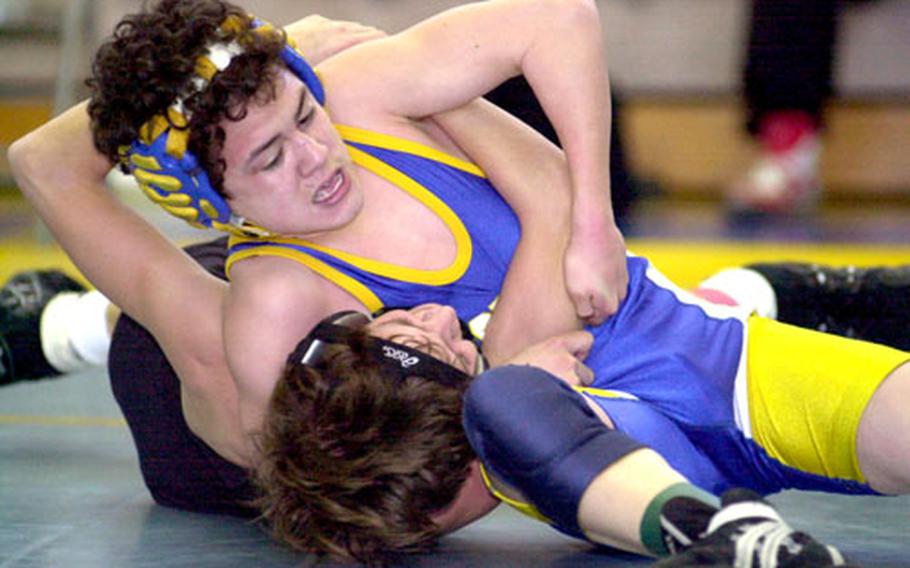 Freshman Mark Meade of the Yokota Panthers gets Kevin Donahue of the E.J. King Cobras in a head-in-arm hold during Saturday’s 101-pound final of the DODDS-Japan wrestling tournament at Yokota Air Base, Japan. Meade, who plans to stay at Yokota until he graduates, won and captured the gold medal. (Dave Ornauer / S&S)

YOKOTA AIR BASE, Japan &#8212; Brian Kitts rose from his chair, pumped his fist in triumph and turned to the crowd at Capps Gym, smiling ear to ear.

Kitts and the Panthers say they&#8217;re not satisfied with being DODDS-Japan champions, not even with their first Kanto Plain Association of Secondary Schools regular-season title in 22 years, their first unbeaten dual-meet season since 1978-79 and three in-season tournament titles.

A tall order, considering that Panthers football squads hold seven straight Japan Football League and Kanto Plain gridiron titles and a 62-7 overall record since Tim Pujol became head coach in 1999. Compare that to Yokota wrestling, which has only three Kanto Plain titles since 1978-79, and two Far East tournament titles: one in 1978; the other in 2002.

Yokota football wandered in the wilderness before Pujol came along. Wrestling was in similar shape until Mark Hanssen arrived for the 1999-2000 season.

Coaches around the theater say continuity is key: keeping the same wrestlers, learning from the same coach using the same system. But given DODDS&#8217; environment, most wrestlers and coaches seem as if they&#8217;re navigating revolving doors.

Even more important than continuity, said Kinnick assistant coach Go Yamada, is for coaches to know every wrestler&#8217;s tendencies, their good moves, their weaknesses, their moods. &#8220;If you build each individual wrestler, you build a solid program.&#8221;

He points to his own mentor, Scott Smith, whose teams won four titles for Kinnick. &#8220;He knew his wrestlers like the back of his hand,&#8221; Yamada said.

He said Kitts, an assistant under Hanssen for four years, is one example of such coaches. So are Steve Schrock of Kadena, with his program since 1996; Julian Harden, Seoul American&#8217;s coach since 1993; and Terry Chumley, assistant and head coach at Kubasaki since 1997.

Yokota has some of the pieces in place. Eight of Kitts&#8217; 14 regular wrestlers will return, including defending Far East champions Patrick Pamintuan (115) and Jason Rodriguez (122).

Those factors have helped pull Yokota wrestling so far out of its mid-1990s dark days that now the team eyes achievements greater than just a Far East tournament title, Kitts said.

&#8220;Mark (Hanssen) took a laughingstock, the biggest joke in Asia, and in four years he turned it into a winner. I have some big shoes to fill,&#8221; Kitts said.