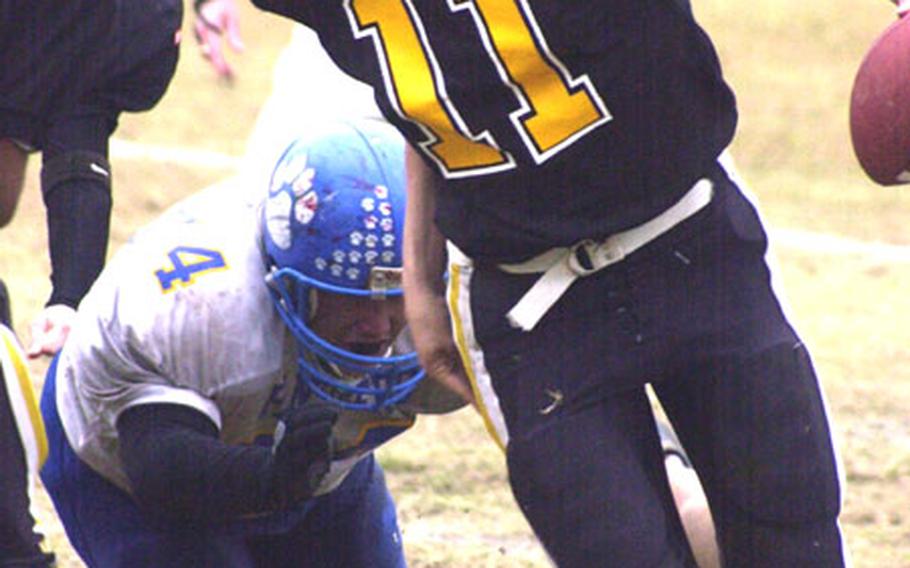 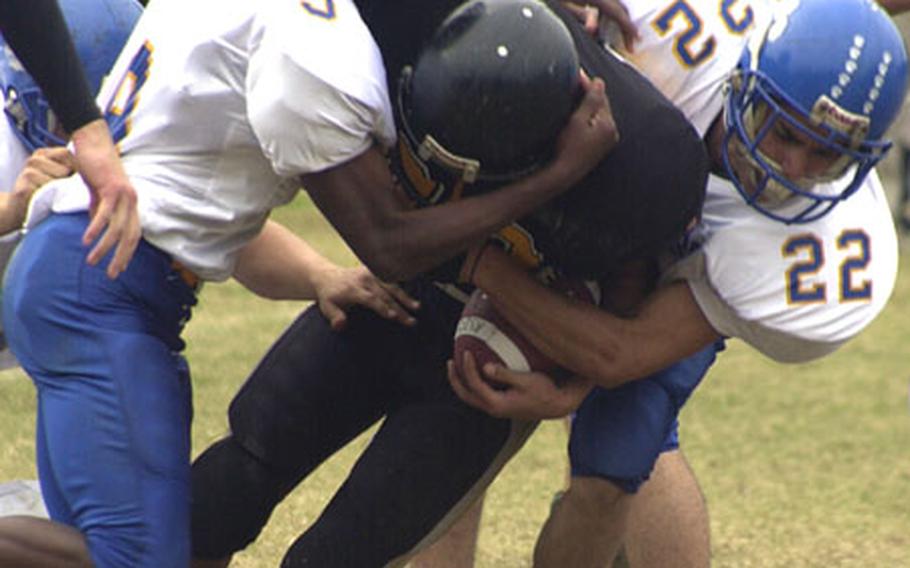 TOKYO &#8212; Faced with a hailstorm of passes by the American School In Japan, Yokota did what it does best &#8212; run &#8212; to capture its fifth straight Kanto Plain Association of Secondary Schools football title.

Mustangs junior quarterback Ben Seevers twice lit up the Panthers secondary for TDs, keeping Yokota off-balance with a blend of draws, counters, traps and screen passes. The Panthers failed to force a turnover and didn&#8217;t record any sacks.

&#8220;I have to credit ASIJ,&#8221; said Yokota coach Tim Pujol. &#8220;They did a good job protecting their passer. We knew they were going to throw, but they exposed something we need to work on this week. They mixed their runs and passes well.&#8221;

Seevers, a slender left-hander whose father, John, is ASIJ&#8217;s longtime defensive coordinator, went 10-for-19 for 144 yards.

His 47-yard first-quarter TD pass to Nathan Tanaka tied it at 7-7. Tanaka snatched the ball out of cornerback D.J. McCary&#8217;s hands and raced up the right sideline for the score.

From there, Yokota dominated until the final drive, when Seevers went 4-for-4 for 59 yards, including an 8-yard TD pass to Daniel Welch with 11 seconds left.

Yokota quarterback Shawn Novak was also efficient, finishing 6-for-7 for 95 yards, including a 3-yard TD pass to Corie White, who caught five passes for 52 yards. Roach scored on runs of 4 and 20 yards, while Pearcey added TD runs of 2, 1 and 89 yards.

The Panthers outgained the Mustangs, 459-270. Seevers accounted for 170 yards of offense. Tanaka ran 15 times for 52 yards and caught three passes for 71.

Defensive end Kyle Deutsch ran an intercepted option pitchout 22 yards for a touchdown and recorded a safety on an end-zone sack, and Jason Emery fell on a fumble in the end zone before the Trojans&#8217; offense, missing six starters due to ACT testing, cranked it up in the third period.

Deutsch also caught four passes for 60 yards from Bryan Krueger, who was 8-for-18 for 144 yards and returned a fumble 45 yards. Jeff Fotakis ran 18 times for 53 yards, while Woody Carter caught two passes for 50 yards.

Kinnick, 5-2 in the JFL, kept alive its slim hopes for a berth in next month&#8217;s Rising Sun Bowl V on Okinawa.

McDermott recorded a safety and returned the ensuing free kick 55 yards for a score. Brenden Lynce had 88 yards and two TDs on four carries, plus eight tackles and two batted passes.

YONGSAN GARRISON, South Korea &#8212; Paced by an offense that racked up 424 yards and six TDs, the Falcons capped a 4-0 season in the first year of DODDS-sponsored football in South Korea.

But unlike the teams&#8217; first meeting, which Seoul American won 59-6 on Oct. 4 in Taegu, the Falcons had their hands full early.

Brian McGee of the Warriors (0-3) scored twice on running plays. Seoul American hurt itself with penalties, getting flagged 22 times for 155 yards.

The Falcons overcame all that as Steve Sivak ran 11 times for 105 yards and two TDs and caught two passes for 65 yards. Leo Pacheco added 99 yards and a score on eight carries and 37 yards on four catches.

Bruce Voelker and Ryan Robbins combined to go 13-for-18 for 207 yards and three TDs. Jeremy Christopher caught five passes for 72 yards and a score, Voelker had three receptions for 27 yards and a TD and Robbins added a 13-yard scoring run.

Scott Tunis had 10 tackles and an interception. Brandon Church and Ezra Taimanglo added six tackles each, with Taimanglo recovering a fumble.

MANGILAO, Guam &#8212; Fresh off a 36-0 win a week earlier over Guam International Christian Academy, the Panthers (2-2) came crashing back to Earth as Danny Manibusan of the Geckos (2-1) threw four touchdown passes, three to Mateo Matanane.

Manibusan went 5-for-14 for 183 yards and the Geckos racked up 156 yards on 20 rushing attempts. Hosea Ware ran seven times for 85 yards and caught a 55-yard scoring pass from Manibusan.

The Panthers managed 76 yards on 28 rushing tries, with Theo Tom scoring the team&#8217;s only points on a 25-yard run to open the second period.

&#8212; Akash Shringi and Matt Krueger contributed to this report.