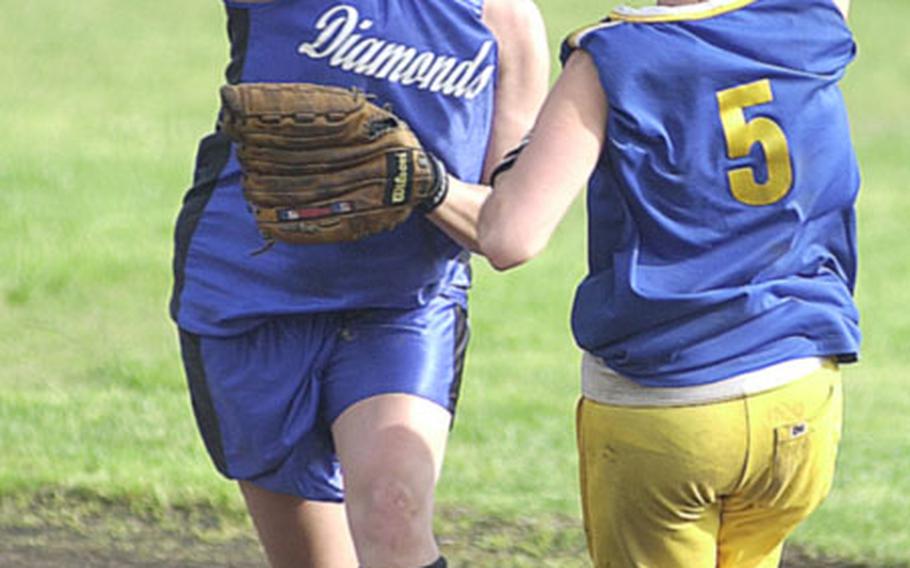 ATSUGI NAVAL AIR FACILITY, Japan &#8212; All weekend, Brittany Grizzard waited for Misawa Diamonds pitcher Sheryl Stake to throw her an outside pitch that the Yokota Panthers third baseman could drive to right field.

In the fourth inning Saturday, Grizzard got her wish &#8212; and Yokota got the break it needed to win the Department of Defense Dependents Schools-Japan girls softball tournament title.

&#8220;That boosted our entire team,&#8221; said Darlene Seeley, who drove home the tiebreaking run in the fourth and gave Yokota a lead it held thereafter. &#8220;That woke everybody up. That was everything for us.&#8221;

Yokota fell behind 2-0 in the first on a two-run, inside-the-park homer by Diamonds first baseman Langley Yard.

The Panthers (18-1) have won six straight league titles and went 5-0 in the tournament despite 50 percent of the team being freshmen.

The Panthers also got a boost from the boys baseball team, which came over from Camp Zama to Atsugi&#8217;s Ranger Field to cheer for the girls after finishing fourth in the Kanto Plain Invitational Tournament.

The Panthers added a run in the fifth on Monica Fletcher&#8217;s RBI single. Carla Bruschuk&#8217;s two-run single and Lisa Lee&#8217;s run-scoring single were the highlights of the Panthers&#8217; six-run sixth that broke the game open.

The Diamonds cut the gap by four in the seventh, helped by RBIs by Ryan Smith and Sarah Campbell, but it was as close as they would get.

Pitching his second complete in as many days, the St. Mary&#8217;s International right-hander gave up six hits and three walks, struck out eight and hit a fourth-inning single as the Titans defeated the Trojans 12-6.

Logue&#8217;s two-run single was sandwiched between a two-run single by Seob Yoon and an RBI hit by Takuma Nakamoto as the Titans broke open a close battle with a five-run inning. St. Mary&#39;s tacked on four runs in the fifth &#8212; three on Chris Terai&#8217;s bases-loaded triple &#8212; to seal it.

Will Badillo went 2-for-3 with a triple and two RBIs and Miguel Vega and Nick Villasana each drove in runs for Zama.

Despite the defeat, Allensworth expressed pride in a young team that lost five of its first six games but won 12 of its last 17.

Zama lost its first two games against St. Mary&#8217;s in March, but last month swept the Titans at home, a fact not lost on Titans coach Tom Molina.