Yokota's Irwin brothers out to help Panthers finish what they started 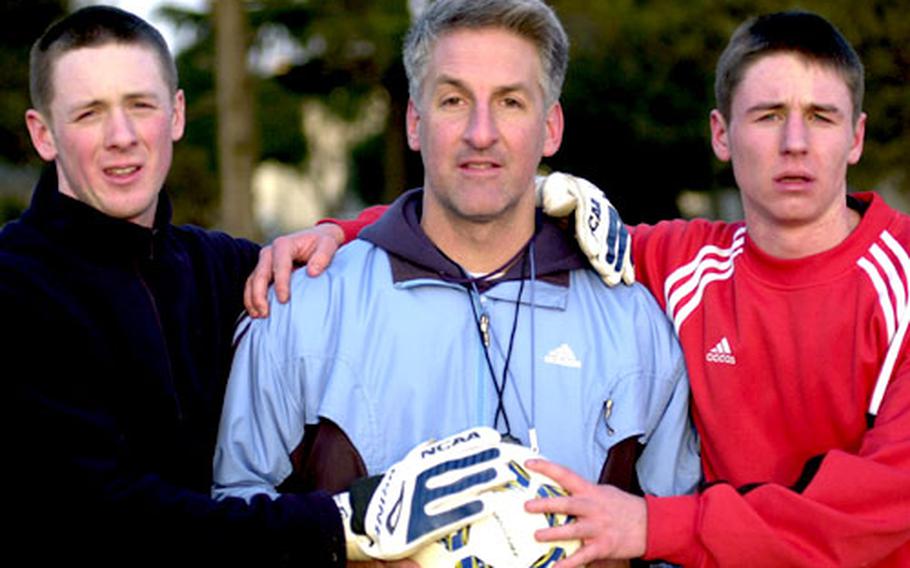 Despite the frigid weather, a fire burned brightly inside Yokota&#8217;s three-sport-star brothers, Matt and Jay Irwin ... a fire stoked by the memory of the lowest light in Yokota&#8217;s 2002 season.

Last May 31, a day 40 degrees warmer than the 11-degree wind chill on that first practice day, the finest season in Yokota soccer history ended in disappointment, in the rain at Okinawa&#8217;s Mike Petty Stadium, thanks to a handball call in the final minute.

The ensuing penalty kick that gave Kubasaki a 2-1 victory is as fresh in the Irwins&#8217; minds as if it occured yesterday. It&#8217;s a memory they want to erase, to make what&#8217;s already been a stellar school year complete, and take care of one last bit of unfinished business.

Sports siblings are common at high schools throughout the Pacific, mainly because of their small size and the large percentage of students involved in athletics and other activities.

Should the Irwins capture that Far East championship, they&#8217;d become perhaps the most decorated set of brothers in Yokota High&#8217;s 30-year history:

With Jay at quarterback and Matt as a receiver and backup QB, the Panthers went 21-2 on the football field &#8212; with Rising Sun Bowl titles the past two seasons. The two losses came via forfeit last fall.As guards and swingmen, the Irwins have played for two Panthers basketball teams that have won 20 or more games.Last soccer season, they won the Japan Soccer League and Kanto Plain Association of Secondary Schools titles, en route to the ill-fated Far East final.Tim Pujol, who&#8217;s coached the Irwins in all three sports and has coached in the DODEA-Pacific system for 10 years, calls the Irwins the best brother combination he&#8217;s had.

The Irwins shrug off their success as an outgrowth of their athletic backgrounds.

It&#8217;s been that way ever since the sons of Air Force Lt. Col. Steve Irwin, a legal officer, were old enough to pick up, kick or dribble a ball.

They&#8217;ve played sports in a variety of places that calls to mind the journeys of Marco Polo.

At Aviano and Vicenza, Italy, the Irwins cut their teeth on the soccer pitch, while learning some of the language.

They picked up rugby rudiments during a one-year stint in London. Then came their first Pacific tour, at Yongsan Garrison in South Korea, where the Irwins learned football under former Yongsan Raiders coach Bob Collins and basketball under Seoul American coach Steve Boyd.

&#8220;It&#8217;s tough to lose kids of that quality,&#8221; said Boyd, whose Falcons teams have battled the Irwins and the Panthers in basketball and soccer since they departed Seoul.

Though they&#8217;re a lot alike, they Irwins have their differences.

Differences aside, the brothers both feel that their closeness helps make them better athletes.

The Irwins hope motivation will help the Panthers take care of that piece of unfinished business that sticks in their craws.

It will mean overcoming a huge boulder. Since the advent of DODEA-Pacific soccer tournaments in 1998, Okinawa has won all six Class AA titles.