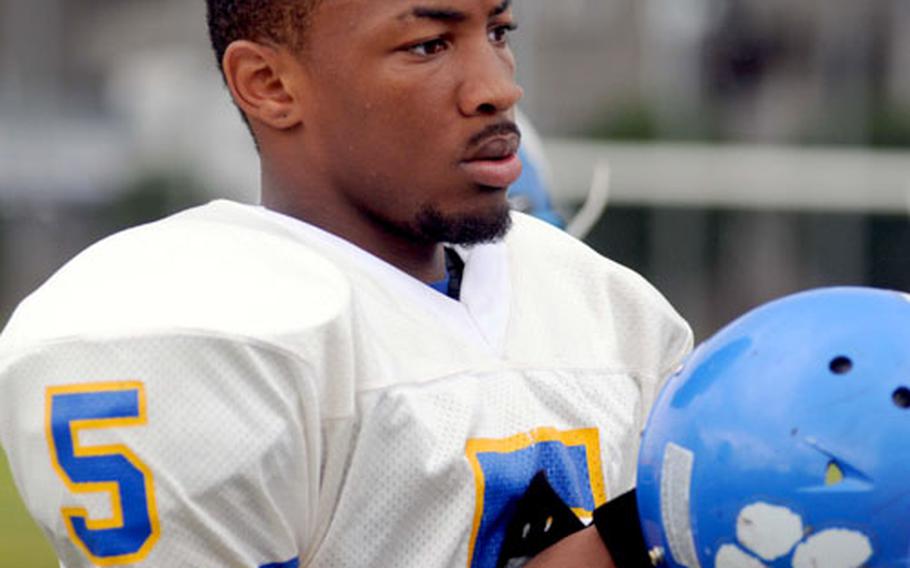 Yokota Panthers senior quarterback DeEric Harvin takes a break during practice. Harvin is 25-for-42 for 449 yards and five touchdowns this season, and thinks the team has a good chance at a Far East Class AA championship. (Dave Ornauer / S&S)

YOKOTA AIR BASE, Japan &#8212; DeEric Harvin&#8217;s tone sounded imploring, almost urgent. His Yokota football team had just walked off the field 21-7 winners over Kubasaki, but the Panthers&#8217; senior quarterback wanted his teammates to remember one part of the contest in particular.

If the senior quarterback&#8217;s tenor sounded urgent, well, it was.

You see, Harvin wasn&#8217;t supposed to be at Yokota this school year, or last. He was able to stay only because his father Dwyane, a technical sergeant with Yokota&#8217;s 374th Medical Group, got an extension that allowed DeEric to stay until graduation.

That gave him an opportunity to settle some unfinished business. Yokota has come up short every year since the Far East Class AA football playoffs began in 2005, and Harvin wants to end that streak.

Harvin has that opportunity, along with the "do-or-die" pressure that comes with it.

This is Harvin&#8217;s fourth season in Yokota&#8217;s program. The Panthers have relished DODDS-Japan and Kanto Plain titles every year since 1999, but they&#8217;ve not closed the Far East playoff deal.

Some things one simply can&#8217;t control, such as a sure touchdown pass dropped in the end zone in last year&#8217;s 19-16 football semifinal loss to Seoul American. Or Keron Brown&#8217;s half-court shot that bounced off the rim at the buzzer, giving St. Mary&#8217;s the Class AA hoops title.

"Little things, like timing mesh points, timing of a play, getting the ball out of my hands quickly, blockers running right," he said.

"We have to increase the intensity every game, take it to the next level," said fellow senior fullback Rainey Daley &#8212; another Panther who&#8217;d been due to leave last year.

This year&#8217;s playoffs are all on Okinawa, with DODDS-Japan facing the Okinawa Activities Council champion in the second semifinal on Nov. 9. The title game is on Nov. 14.

Whether that includes a Class AA title remains to be seen. Harvin says what&#8217;s important is not what&#8217;s on the scoreboard, but what the team leaves on the field.

That said, what does Harvin feel Yokota can accomplish?