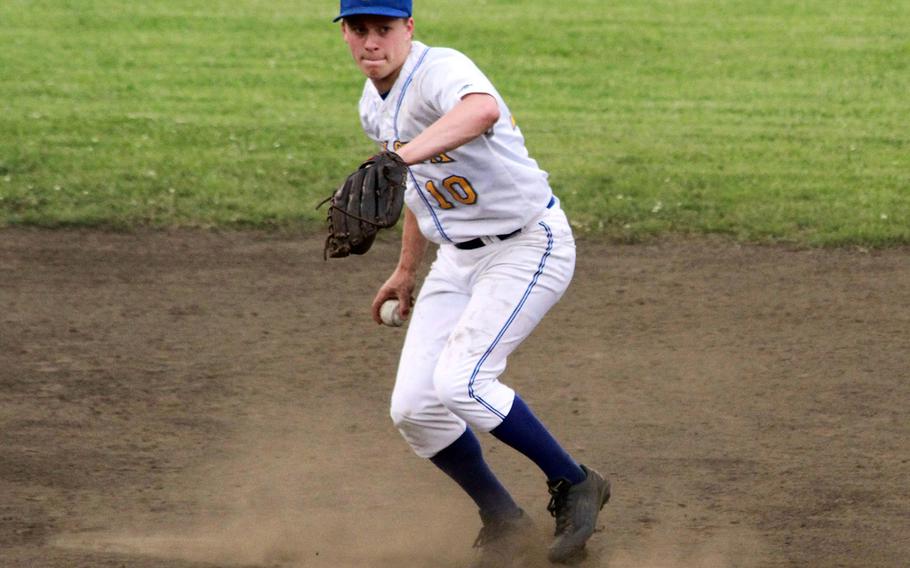 One reason why Yokota enjoyed such a successful baseball season was players such as Jack Winkler doing all the big things and the little things well.

“Jack’s been really consistent all year long,” Panthers coach Steven Ferch said of Winkler’s pitching ratios and batting ability that earned him the team’s Silver Slugger award. “He’s come through with some really clutch performances for us. When it was needed, he’s always come through.”

Key to the Panthers’ season was their 3-2 win over Nile C. Kinnick in the DODEA-Japan tournament. Winkler got the win, pitching four innings of three-hit ball with three strikeouts.

“It was like a big weight was lifted off our shoulders,” Winkler said. “At that point, we thought we could beat anybody.”

And Yokota did, winning every game the rest of the season, including three Far East D-II games in which the Panthers did not give up a run. They even handed Division I powerhouse American School In Japan, with five straight Far East titles, its only two losses of the season.

For all that, Winkler has been named Stars and Stripes’ Pacific baseball Athlete of the Year.

“I couldn’t be happier,” Winkler said of the season. “The entire team came together. We played not like a team, but like a family. We were all friends, we were all close, we had the same goal and we were all willing to put in the work to get it done.”

Aside from the numbers he posted at the plate and on the mound, Winkler will likely be most remembered by Ferch for a steal of home in the Far East D-II title game, won by the Panthers 14-0 over Zama.

Yokota practiced the play just once, yet it worked like a charm.

With Yokota up 6-0 and nobody out in the third inning, baserunner Nick Yingling was at third and Winkler at the plate when assistant coach LeSean Thomas gave the steal of home sign.

“Spread my legs as wide as possible and give him (Yingling) as much space as he needed” to slide home,” Winkler said. “I was pretty confident. I knew if he (Thomas) was going to call it, it was going to work out well.”

Sure enough, Yingling slid home safely between the legs of Winkler and ahead of the tag of Zama catcher Josh Bayardo. Ferch called it the Panthers’ “play of the year.” It led Yokota to a 14-0 triumph over the Trojans and their third D-II title in four years.