Yokota's big plays too much for Zama 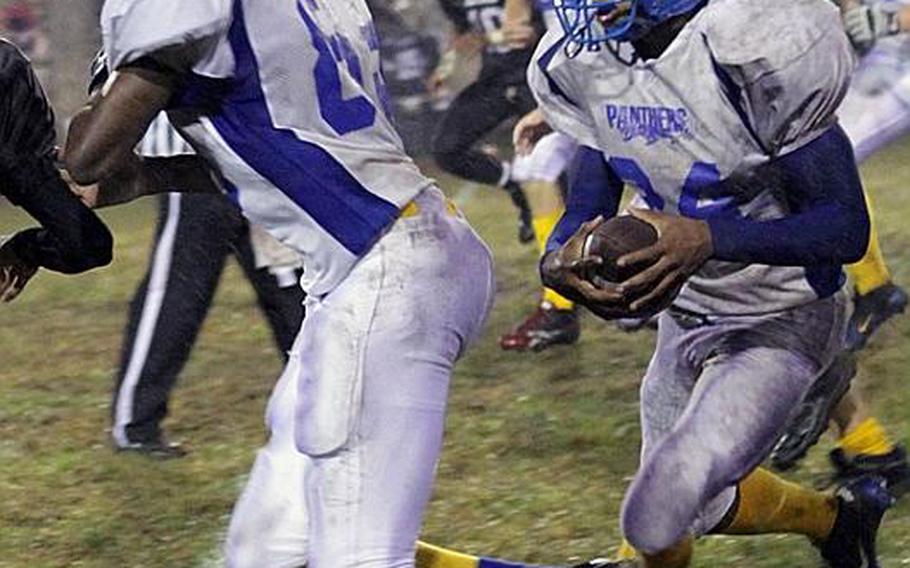 CAMP ZAMA, Japan &ndash; Most of Yokota&rsquo;s touchdowns this season have come on short bursts to medium-length plays. On Friday at Zama American, the Panthers used a rare big-play skein to wreck the Trojans&rsquo; homecoming.

Tre Bailey ran eight times for 76 yards, including a 48-yard touchdown, and Michael Litman ran 72 yards for a score and caught a 27-yard TD pass as Yokota blanked Zama American, 33-0. The game was played with a running clock in the second half.

&ldquo;We scored on big plays, and we hadn&rsquo;t been scoring on big plays,&rdquo; coach Tim Pujol said of the Panthers (7-1), who also got a 58-yard run from Scott Hanson to set up a Bailey touchdown. &ldquo;We had something happen for us that hadn&rsquo;t happened in every game.&rdquo;

Yokota rolled up 333 rushing yards on 39 carries, but no Panthers back went over 100 yards for the first time this season.

Morgan Breazell, the Pacific&rsquo;s leading rusher (859 yards, 107 carries) went scoreless for the third straight week and was held to a season-low 64 yards on 8 carries.

Bailey was held to below 100 yards for the first time in five games. He finished with 76 yards on eight attempts and has 709 yards on 57 carries this season.

Defensively, the Panthers held Zama (3-5), which lost its third straight, to 91 yards on 36 plays. Yokota forced three turnovers and a sack; Ray Butler had a sack and a fumble recovery.

Zama&rsquo;s Mitchell Harrison had a team-high 43 yards on 10 carries. He has 710 yards on 70 carries this season. Andre Encarnacion (751 yards, Pacific-leading 13 TDs, 102 carries) did not play due to a nagging ankle injury.

&ldquo;We had some people who needed to be out,&rdquo; Zama coach Steven Merrell said. &ldquo;It wasn&rsquo;t wise, smart to have them playing for various kinds of injuries and we (had) a couple more guys tonight&rdquo; with hand injuries.

The game was played in rain ranging from a light mist to heavy downpour. &ldquo;There were a couple of turnovers that wouldn&rsquo;t normally happen, but I don&rsquo;t think it was as big an impact as it could have been,&rdquo; Merrell said.