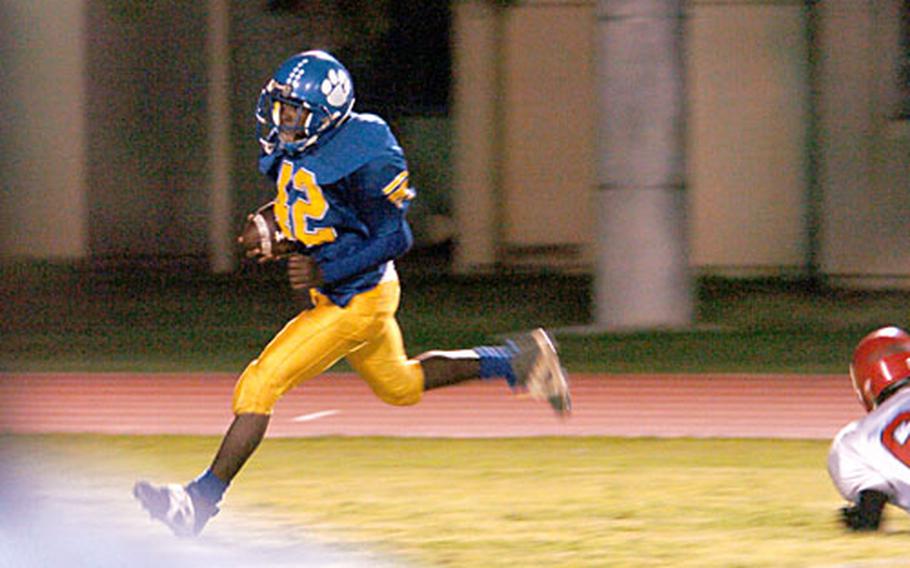 Using a &#8220;running-back-by-committee&#8221; approach has paid dividends this season for Yokota.

Hudson has scored five TDs in the Panthers&#8217; first two games, accounting for 30 of their 101 points.

Hudson scored on runs of 6, 2 and 12 yards, finishing with 37 yards on seven attempts. Anthony McNeill contributed a 25-yard TD run and carried 13 times for 107 yards, and fullback Mark Dixon had 43 yards on five carries, including a 4-yard touchdown run.

Quarterback Doug Bloom went 4-for-9 for 73 yards and ran five times for 54 yards, including a 12-yard scoring run. Patrick Pamintuan returned an interception 45 yards for a touchdown, and Stefan Welch booted a 42-yard first-quarter field goal and went 7-for-7 on extra-point kicks.

Yokota has won 50 straight games on the field dating to the 2000 season. That includes the first two of the 2002 season that were forfeited after Yokota found it had used an ineligible player.

&#8220;They have a well-coached team. They&#8217;re strong and fast,&#8221; first-year Red Devils coach Bill Schofield said after a markedly different end from Kinnick&#8217;s two encounters last season with Yokota. The Devils led both games but lost 7-6 and 24-7.

This time, Kinnick opened with a 30-yard pass play from Jeff Galang to Jeff Battle and forced three turnovers but had little else to cheer about.