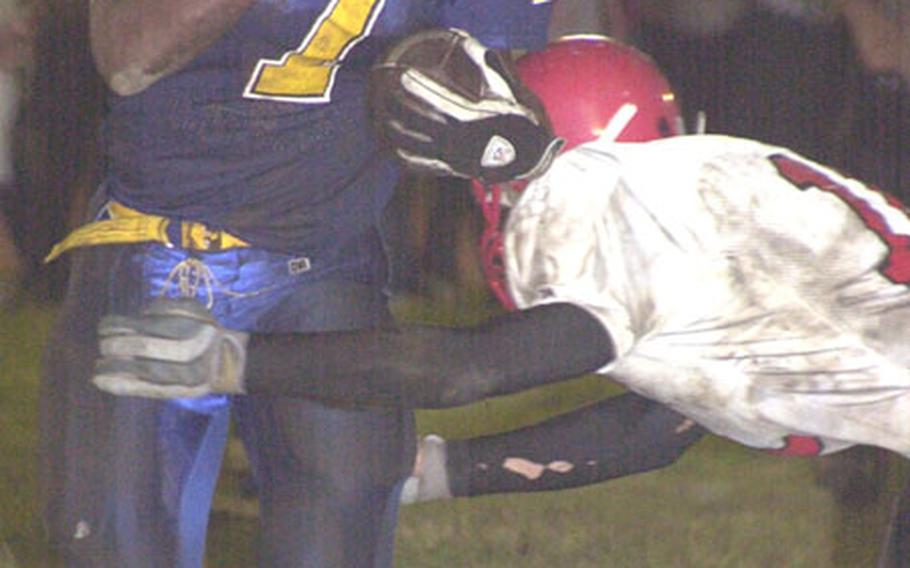 Robert Stovall chuckled. The voice on the other end of the phone, discussing Friday&#8217;s Japan Football League showdown between Nile C. Kinnick and Yokota, said he &#8220;wouldn&#8217;t be able to sleep&#8221; if he missed the contest.

Both teams, featuring powerful rushing attacks and stingy defenses, take 3-0 marks into a contest many are calling the biggest game in Japan in the last five years. Three weeks into the season, Kinnick holds a half-game lead over Yokota for the JFL lead.

A packed house is expected at Bonk Field. Kinnick is trying to line up two spectator buses and another for its marching band, while Yokota plans a pep assembly at 1:45 p.m. Friday inside Capps Gym, among other festivities.

What they&#8217;ll see are two evenly matched teams, at least on paper.

The Devils, who have scored 101 points and allowed 20, rely on their own power ground game, which has amassed 1,054 yards and 14 TDs. Senior Richie Korth is the pointman, with 485 yards and five TDs on 54 carries.

&#8220;It will be a hard-hitting, closely fought battle that will probably turn on a key turnover or a big individual play,&#8221; Pujol said.

That would be a dramatic departure for a series that&#8217;s been one-sided the past four seasons. Yokota has beaten Kinnick eight straight times and outscored the Devils 221-13 in that span, with six games ending in shutouts.

If there&#8217;s a difference now, Kinnick might hold an edge in size and experience along the line of scrimmage.

&#8220;This is our first test to see how we react in a big game against an equally skilled team. Expect us to come out, play hard, not give up and as a team gain respect from Yokota.&#8221;