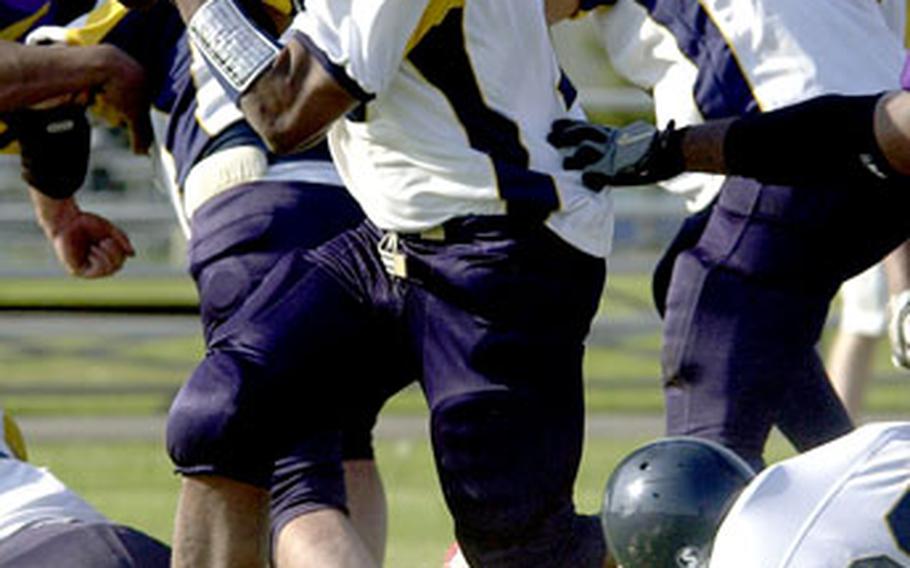 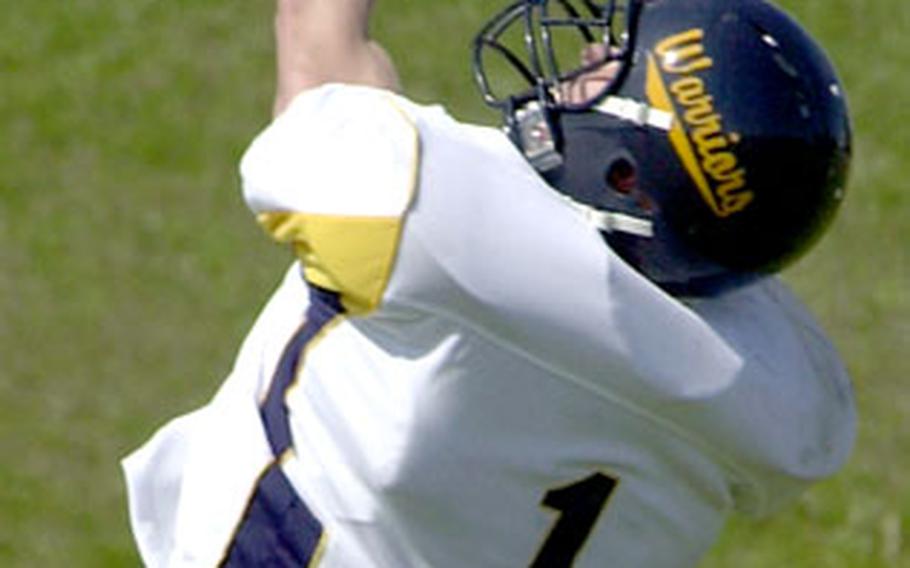 Yokota Warriors tight end Bruce Turner has the ball slip through his grasp against the Misawa Marauders on Saturday at Misawa Air Base, Japan. (Dave Ornauer / S&S) 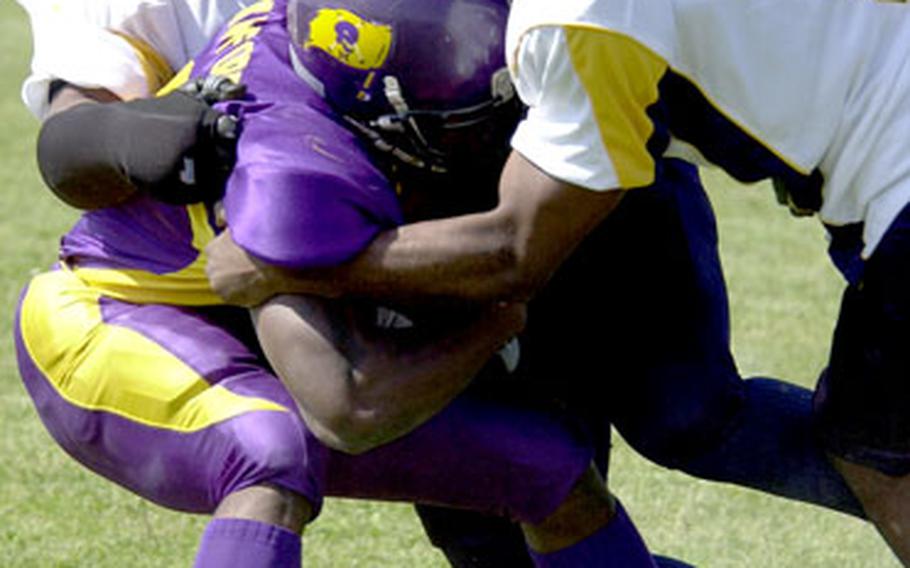 Meanwhile, Atsugi might have entered the season on a 16-game losing streak dating to 2003. But the Falcons gave Yokosuka all it could handle before the Seahawks scored with 28 seconds left to win 20-14 at Atsugi Naval Air Facility&#8217;s Reid Memorial Stadium.

“Sooner or later, we knew something would come up,” said Jonathon Pitts, who won in his Yokota coaching debut despite the Warriors being outgained 200-78.

“The team could have fallen apart. We were behind the whole game,” Dowdell said, crediting the offensive line for putting life into the Warriors. “We have some old veterans in the line. They lit a fire under us. They played hard the whole time.”

Williams said, “We needed a spark. We had all the right play calls. We just needed to get something going. Once we got that spark, we held it.”

Added Anderson, “We had a nice turning point. We turned it around and came through when it mattered the most.”

That turning point helped Yokota gain vengeance for its 30-21 USFJ-AFL title-game loss to the Marauders on Aug. 27 at Misawa Air Base. Saturday’s contest was the Marauders’ first home defeat since falling 54-6 on Sept. 1, 2001, to Yokosuka.

On the Marauders’ first possession, facing second-and-8, quarterback Fred Ellis scrambled out of danger to find wideout John Hall in the end zone for a 27-yard TD pass 5:23 into the contest.

From there Misawa stalled, turning the ball over twice, giving it back to Yokota on downs twice and punting once its next five visits to Yokota turf.

“Our motivation wasn’t there,” first-year coach Dwight Abel said. “[The Warriors] had more energy than we did. When it came time to execute, we had some critical mistakes.”

Yokota’s offense was equally ineffective and the game became a defensive standoff until Yokota’s late surge.

Ellis tried to rally the Marauders on one final drive, hitting Bobby Fowler for completions of 22 and 11 yards while reigning league MVP Jamey Crawford rushed twice for 18 yards and a first down to the Yokota 23-yard line. Crawford led both teams with 88 yards on 18 carries.

But the Warriors’ defense stiffened. Abel opted for Benny Baladez to attempt a 41-yard field goal in the closing seconds. The snap was slow, however, and holder Robert Yaus’ desperate pass attempt fell incomplete. Yokota then ran out the clock.

Ellis went 8-for-17 for 90 yards. Yokota’s Mardie Wilson intercepted an Ellis pass and sacked him once; veteran Greg Powell sacked Ellis twice. Ian Evans blocked a punt and picked off a Dowdell pass for Misawa.

“This was definitely the wake-up call we needed,” Abel said. “We can’t rest on last year’s laurels.”

Reid Memorial Stadium might as well be called the “House of Horrors” for the Seahawks: Yokosuka survived its past two encounters there against Atsugi by scores of 24-13 and 6-0.

“Every time we go to Atsugi, they play us tough. That’s the way it’s always been. They’re a nice team,” Seahawks coach Robert Cole said.

The Seahawks bulled their way into the Falcons’ red zone four times in the first half but scored only once. Yokosuka fumbled on its first possession and Atsugi’s Greg Thomas promptly ran 32 yards to put the Falcons up 6-0. The Seahawks responded with Luke Raimo’s 3-yard run in the second quarter, and Cameron Hanes’ 30-yard TD pass to Leon White made it 14-6 in the third.

Thomas’ second scoring run, a 7-yarder, plus a two-point conversion, tied it 14-14. Yokosuka settled the deal on its final drive, with Charles Ellis running in from 22 yards out with 28 seconds left.

“One of these days, we’re going to get them. It just wasn’t this time,” Falcons coach Daniel Estrada said.