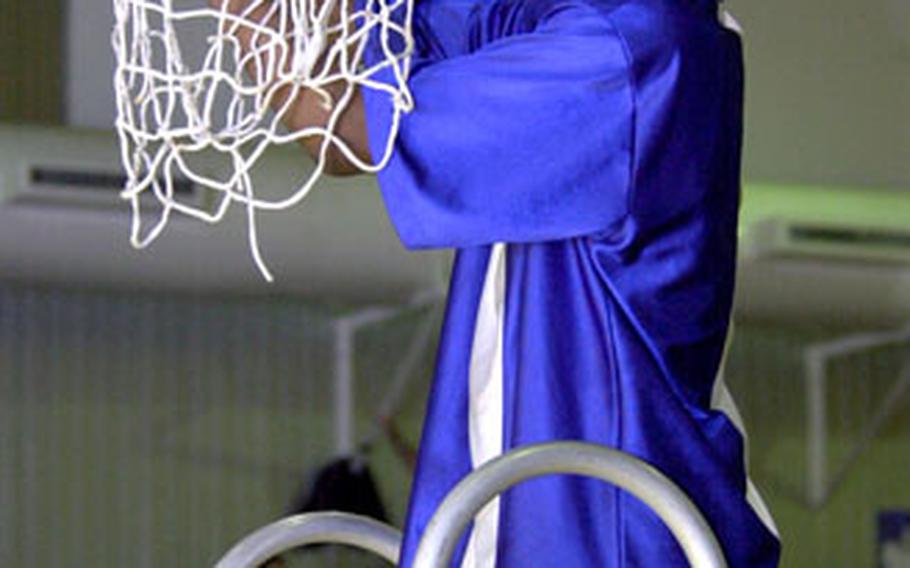 Yokota’s Caiveon Thomas cuts off a piece of the net after his team beat Seoul American 72-51 to take the Far East Boys Class AA title on Kadena Air Base, Okinawa, on Saturday. (Fred Zimmerman / S&S) 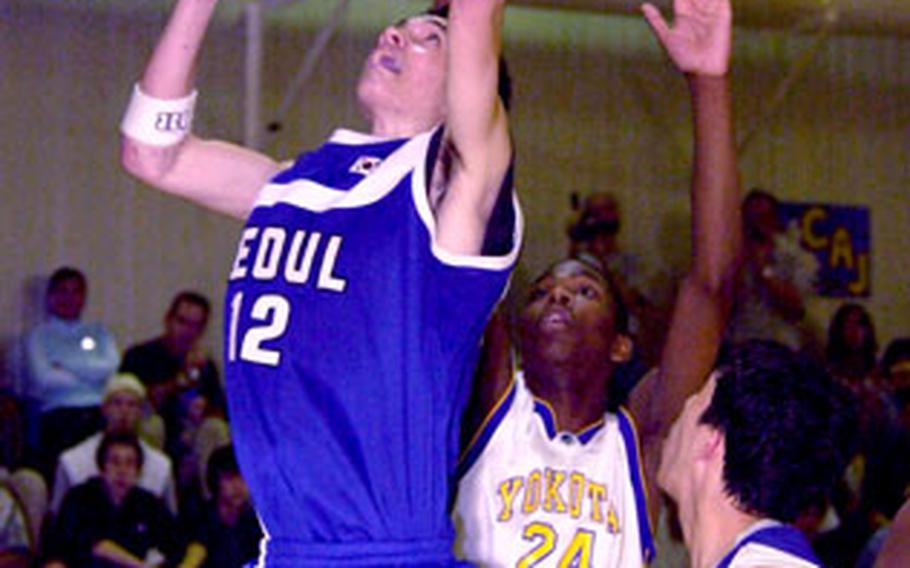 Ettl said it was fitting Saturday&#8217;s victory pushed the Panthers&#8217; winning streak to 30 games. They last lost 47-45 to Robert D. Edgren on December 3 at Misawa Air Base &#8212; part of a weekend when the Panthers suffered their only three losses of the season.

Once there, the Panthers rode the scoring of Cooper and Thomas and played stingy defense, led by senior Jason Ricks, who shadowed the Falcons&#8217; senior point guard Jamaal Mohn the entire game.

Yokota led from the start, but broke it open in the second quarter after Mohn was called for an offensive foul.

Still, the Falcons were within reach until the third quarter. Then the Panthers gradually pulled away, leading by 18 entering the final eight minutes.

Saturday also was sweet for Ettl. He won his first Class AA championship in four years as Yokota varsity coach, after taking the Panthers to the final twice.

Notes: In five previous championship game appearances since 1982, the Panthers lost to Faith Academy that season, to American School In Japan in overtime in 1983, to Kadena in 1984 and 2005 and to Kubasaki in 1988. ... Seoul American now is 3-for-5 in Class AA title games; the Falcons beat Kadena for the 1996 championship and topped Kubasaki and Kinnick in 2003 and &#8217;04. Seoul American also won the 1994 final 50-48 in double-overtime over Hong Kong International but had to forfeit the victory for using an ineligible player. ... Yokota&#8217;s victory was the first time the home team had not won the Class AA title since 2002, when St. Mary&#8217;s International of Tokyo won its second of two titles on Guam.