Wrestling teams in Korea, Japan get a look at the future 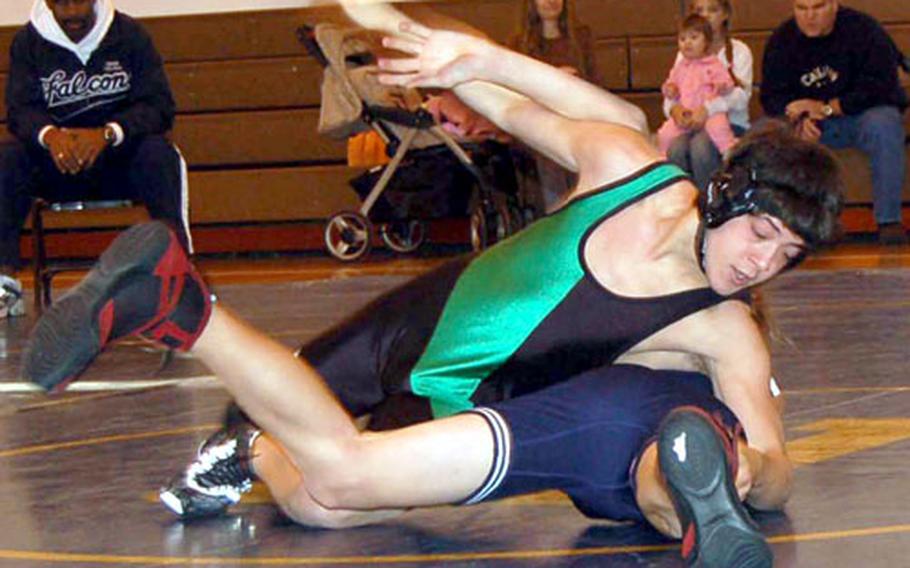 It was a day of firsts as the Department of Defense Dependents Schools-Korea high school wrestling season opened Saturday at Taegu American School:

E.J. King of Sasebo Naval Base wrestled in Korea for the first time.A girl won her weight class &#8212; a first in the Pacific for any meet featuring DODDS schools.Taegu American, fielding a full lineup (12 of 13 weights) for the first time, also recorded a school first: Beating six-time defending league champion Seoul American.&#8220;We&#8217;re excited,&#8221; said Bill Riggs, a veteran coach in his first year at the Warriors&#8217; helm.

Unlike 2005, when the Warriors brought only six wrestlers to the Far East tournament, 31 tried out for the team this season and 25 have continued to work out. The school has its own mat &#8212; inherited from Seoul American &#8212; for the first time.

That Riggs is the first Taegu high school teacher to coach the team since the 1980s, has made a huge difference in team building, he said.

The team also does the &#8220;little things&#8221; that keep a program healthy and winning, Riggs said. He&#8217;s enlisted four student managers who take care of everything down to frequent bleaching and mopping of the mats.

Taegu&#8217;s victory in its first regular-season event shows that the program has begun to turn the corner, Riggs said.

Improving Taegu&#8217;s odds was sophomore Emily Albonetti, who spent much of last season losing and learning. On Saturday, she won two bouts by pin and a third by forfeit, capturing the 101-pound weight class.

E.J. King could have gone instead to the Robert D. Edgren Invitational at Misawa Air Base in northern Japan but travel to Misawa Air Base by high-speed train would have cost about $500 more per wrestler. Instead, the Cobras bused to Hakata port, sailed by high-speed boat to Pusan and bused from there to Taegu.

Japan wrestling teams &#8216;get the nerves out&#8217;With only five Far East tournament gold medalists returning this season, and many other standouts transferred or graduated, DODDS-Japan teams took Saturday&#8217;s Edgren Invitational as an opportunity to look at their future.

Many freshmen and sophomores getting their first taste of competition dotted the four teams&#8217; lineups &#8212; and one coach said he liked what he saw.

In addition to giving youngsters their first bouts to &#8220;get the nerves out,&#8221; Kitts said, the tournament also is a good warmup for the DODDS-Japan schools wrestling in the Kanto Plain Association of Secondary Schools season, which begins Wednesday.