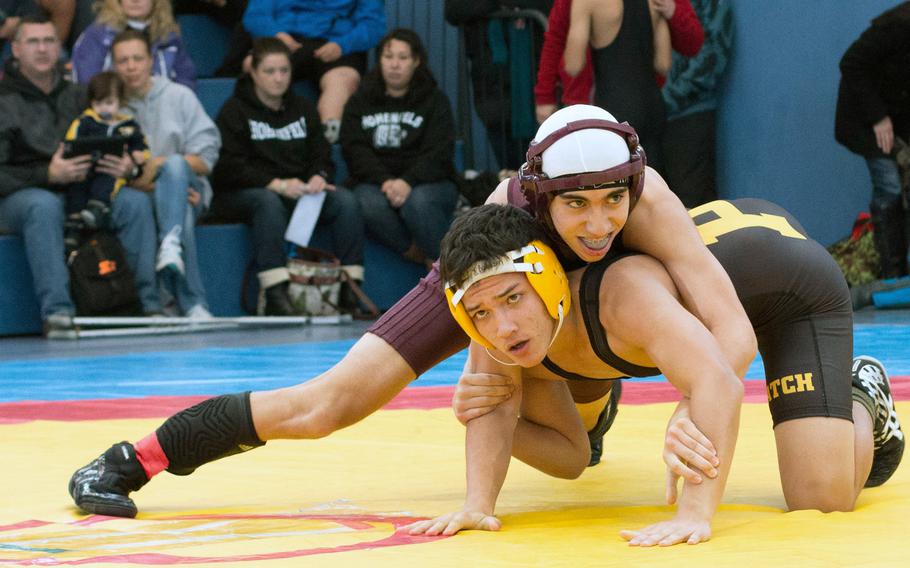 Eduardo Castaneda of Vilseck, top, and Johnathan Brabazon from Patch look to their coaches for advice during their match on Dec. 7, 2013. The DODDS-Europe wrestling season resumes Saturday with 20 teams in action at four sites. Vilseck will be be wrestling at home, while Patch travels to Kaiserslautern. (Michael Darnell/Stars and Stripes)

The DODDS-Europe wrestling season resumes Saturday with 20 teams in action at four sites. Here’s a look at where a few of those teams stand entering the season’s final stretch.

Lakenheath: Confined mostly to sharing meets with northern neighbors such as Alconbury, Brussels, SHAPE and AFNORTH, Lakenheath will get a long look at its Germany-based Division I wrestling competition over the next couple of weekends.

On Saturday, the Lancers will share brackets with Patch and host Kaiserslautern; they’ll find Wiesbaden among their opponents a week later in Brussels.

Lakenheath entered the break on a dominant note, piling on 260 team points and claiming first place in 11 of 14 weight classes to run away with a five-team meet at Alconbury.

Kaiserslautern: The hometown Raiders are looking forward to testing themselves against the visiting Lancers, head coach Brian Daly said.

Senior Zain Leach and sophomore Chris Dufresne are unbeaten at 182 and 195 pounds, respectively; their duels with Kaiserslautern and Patch contenders might be previews of final-day European tournament matches. Sophomore Nick Dufresne, meanwhile, will return from an injury to see where he stands in the crowded 170-pound ranks.

Wiesbaden: The Warriors will travel to Vilseck with hopes of rekindling the momentum they gathered before the break.

Coach Christopher Evans said junior Hunter Lunasin is becoming “something of a dominant force” at 220 pounds, and senior Justin Vatcher should find himself in the heat of 182-pound competition at the European tournament. Interestingly enough, two of Wiesbaden’s top wrestlers share a weight class at 152 pounds; Evans said seniors Brayden Lamb and Alex Wieman might place first and second – not necessarily in that order – “every weekend including Europeans.”

Finally, Evans said he’s looking forward to seeing his bigger wrestlers face off with Vilseck, which is notorious for its strength in the upper weight classes and is stacked again this year behind 195-pounder Kraig Sumpter and 285-pound heavyweight Armando Saldana.

Bitburg: The Barons have just seven wrestlers on their roster, but they’re young and quickly improving as they travel to Kaiserslautern for Saturday’s meet. Sophomore Kaleb Hoopes is a solid entry at 106 pounds, and freshman Cameron Castillo is an emerging force at 145. The young squad also has a measure of experience in junior Brandon Beaumont, a European semifinalist last year at 113 pounds who is now excelling at 126.