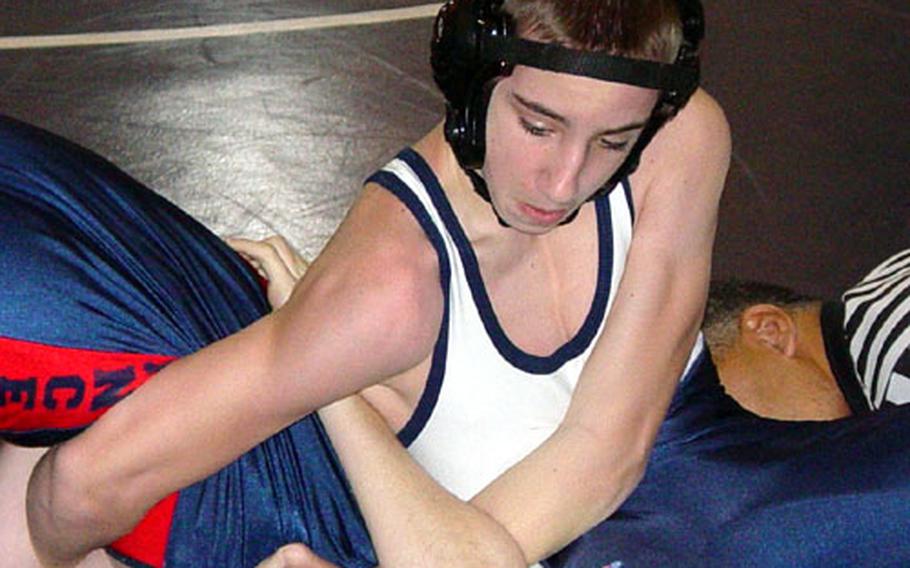 Bitburg 103-pounder Scotty McQuisten works on the pin he eventually scored in 1:56 against Logan Snow of Lakenheath. The two met Jan. 17 at a meet hosted by London Central. (Courtesy of Jay Gardner / Bitburg H.S.)

WIESBADEN, Germany &#8212; Everyone knew that European 103-pound wrestling champion Scott McQuisten of Bitburg was quick, but even by his standards, last weekend he was a whirlwind.

Friday, McQuisten picked up his records and officially ended his attendance at Bitburg High School. He then traveled to Wiesbaden in time to pin Ramstein&#8217;s Jeremiah Raveling in 1:37 to qualify for Saturday&#8217;s semifinals.

In the semis, he claimed a 21-6 technical fall over Ramstein&#8217;s Nick Grahek and then ended his day by becoming the first freshman to win a European title since Josh Anderson of Patch accomplished the feat in 2001. That distinction came when he downed teammate Daniel Brunal 9-7 in Saturday&#8217;s championship bout.

Then it was home to pack.

And Tuesday afternoon, McQuisten was on an airplane bound for his new home in Scott Air Force Base, Ill., leaving behind the European portion of his wrestling career which covered four years of Youth Services and middle school competition along with his freshman year at Bitburg.

During that time, McQuisten lost one match ... by one point on Jan. 24 to London Central&#8217;s Jonathan Scott, who won the European 112-pound championship on Saturday.

&#8220;I moved him up [a weight class] to get him some competition,&#8221; said Bitburg coach Jeffrey Watts, who eagerly waited for McQuisten to gain his high school eligibility.

Brunal&#8217;s takedown was a nifty two-leg that cut McQuisten&#8217;s lead to 4-3 at the end of the first period. After that, though, McQuisten scored three more takedowns to put the match away.

Even so, McQuisten said he was nervous before the match. It had been a long time coming for a wrestler who first attracted notice when he was a 65-pound seventh-grader beating bigger high school wrestlers in exhibition matches at the Wolfpack Holiday Classic.

Saturday night, he might have liked it best of all, if only he hadn&#8217;t had to beat a friend to win the gold medal.

The kind of competition that will allow McQuisten to make the most of his gifts.