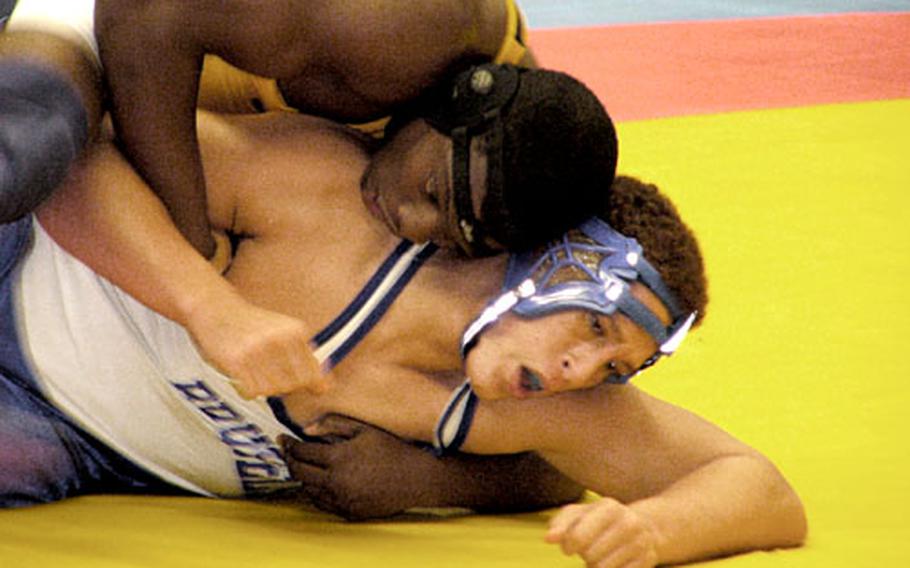 W&#252;RZBURG, Germany &#8212; Just like each previous edition, Saturday&#8217;s 15th annual Wolfpack Holiday Classic wrestling tournament was a yardstick for the best wrestlers in Europe to see how they measure up.

&#8220;The thing about holiday tournaments is that most good wrestlers come out for them,&#8221; Ramstein sophomore Coty Reinhart, the defending European 135-pound champion, said after he nailed down the 152-pound crown by pinning Wiesbaden&#8217;s Steven Ponte in 1:31.

To prove Reinhart&#8217;s point, no fewer than 12 podium finishers from last February&#8217;s European championships, led by returning champs Reinhart and teammate Noah Sheppard, braved icy roads and snow to test themselves on Saturday.

&#8220;Everybody likes the Wolfpack Classic. It sets you up for Europeans,&#8221; added Kaiserslautern&#8217;s Madison Hayes, third in Europe at 171 last season. He pinned Patch newcomer Tony Gorry in 5:32 to win his weight class round-robin.

&#8220;What has evolved here since our first tournament in 1991 is an event where wrestlers can gather to see where they stand,&#8221; tourney founder Duane Werner said.

Werner, who built the W&#252;rzburg wrestling program into a perennial power, has moved on to become an assistant principal at Patch. But he couldn&#8217;t stay away from the Wolfpack tournament. On Saturday he was a referee for matches he once organized and coached.

The tournament gave an idea of what wrestlers and fans have to look forward to. Heidelberg&#8217;s Brandon Simmons, fourth in Europe at 215 in his first try at wrestling last season, won at 215 on Saturday, defeating Eric Popp of Brussels 10-9 in a match that whetted observers&#8217; appetites for this year&#8217;s European championships Feb. 17-18 in Wiesbaden.

Saturday&#8217;s 160-pound champion, Elliott Boltz of Heidelberg, got exposure to some competition from far-off places.

Boltz said he&#8217;ll be wrestling 152 when the season resumes in Janaury, setting up a possible collision in the Europeans with Ramstein&#8217;s Reinhart, ranked among the nation&#8217;s top 20 freshmen and sophomores by USA Wrestling.

Vicenza wrestler Shane Hinton used the Wolfpack as a scouting opportunity for the second straight December.

&#8220;I learn whom to look out for,&#8221; said Hinton, who brought younger brother Kyle to wrestle in the middle school division Saturday.

Traveling the farthest for the Wolfpack was Menwith Hill eighth-grader Bryce McClain, who wrestles with a British freestyle club.

Even with all the competition he gets with club wrestling, McClain finds this event worth the trip.