With many favorites gone, titles up for grabs 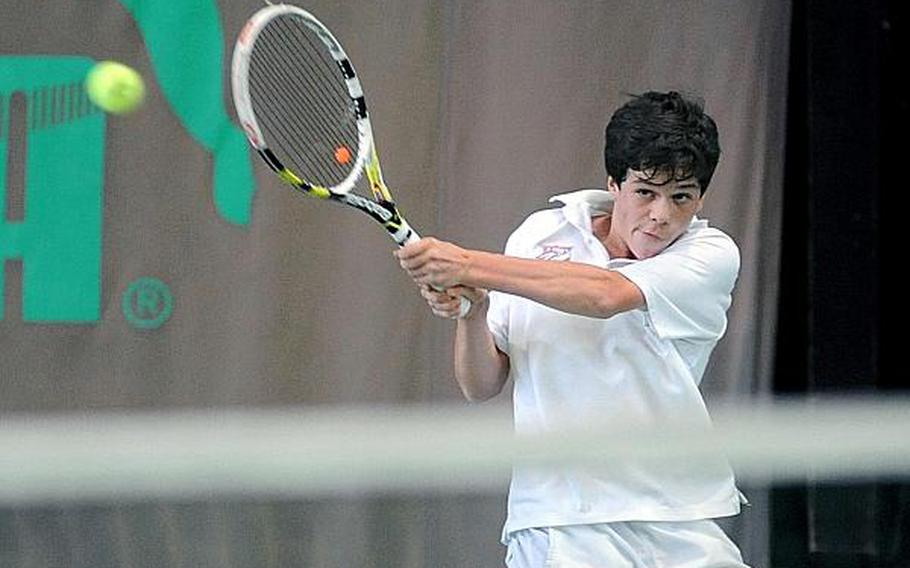 Fabian Sandrup Selvik of International School of Brussels returns a shot at last season's DODDS-Europe championships. Selvik will be returning for the Raiders this season. (Michael Abrams/Stars and Stripes)

Fabian Sandrup Selvik of International School of Brussels returns a shot at last season's DODDS-Europe championships. Selvik will be returning for the Raiders this season. (Michael Abrams/Stars and Stripes) Wiesbaden's Jade Sullivan returns a shot at the net at last season's DODDS-Europe championships. Sullivan is returning for the Warriors this year. (Michael Abrams/Stars and Stripes)

The 2013 DODDS-Europe tennis season opens this weekend with 20 teams in action at 10 sites across the continent.

On Friday, SHAPE opens the season against regional rival Lakenheath. Nine more meets follow Saturday, including a quick turnaround for SHAPE as it visits Alconbury and home meets for expected large-school powers Ramstein and Patch. Schweinfurt, meanwhile, will begin its final season with a three-team meet featuring Bavarian neighbors Ansbach and Vilseck.

The fast start is appropriate for a streamlined tennis season that will span just six Saturday before arriving at the European championships Oct. 24-26 at Wiesbaden, Germany.

DODDS-Europe tennis is always vulnerable to new and unheralded phenoms that render predictions moot. That appears to be particularly true this season.

The Raiders return what appears to be an improved version of No. 1 boys singles player Fabian Sandrup Selvik. A rising sophomore, Selvik made his name at last year’s European championships with a run to the semifinals before finally falling to more-experienced competition.

Some of that same competition is still standing in his way. Peter Kovacs, who beat Selvik in last year’s third-place match, returns for Lakenheath.

But Patch’s Ajdin Tahirovic, a former two-time champion and 2012 runner-up, isn’t playing DODDS-Europe tennis this season. And defending champion Dimitris Stavropoulos, a SHAPE junior, may or may not play because of other commitments.

While Selvik will attempt to build on his successful debut, his teammate, incoming ISB freshman Anouchka Laurent Josi, is set to launch her own promising career. She’ll find a lot of available space at the top of the DODDS-Europe girls singles ranks.

European champion Eugenia Srodowski of Patch, runner-up Alexandria Bellas of AFNORTH and semifinalist Meghan Augsburger of Ramstein are all gone from the DODDS-Europe ranks. Only sophomore Jade Sullivan of Wiesbaden returns from among last year’s singles semifinal foursome.

But Josi and Sullivan aren’t the only young phenoms striving to assume the vacant throne. Sophomore Marina Fortun, a member of Patch’s European championship doubles team as a freshman, is a viable contender to replace Srodowski and keep the Panthers on top.