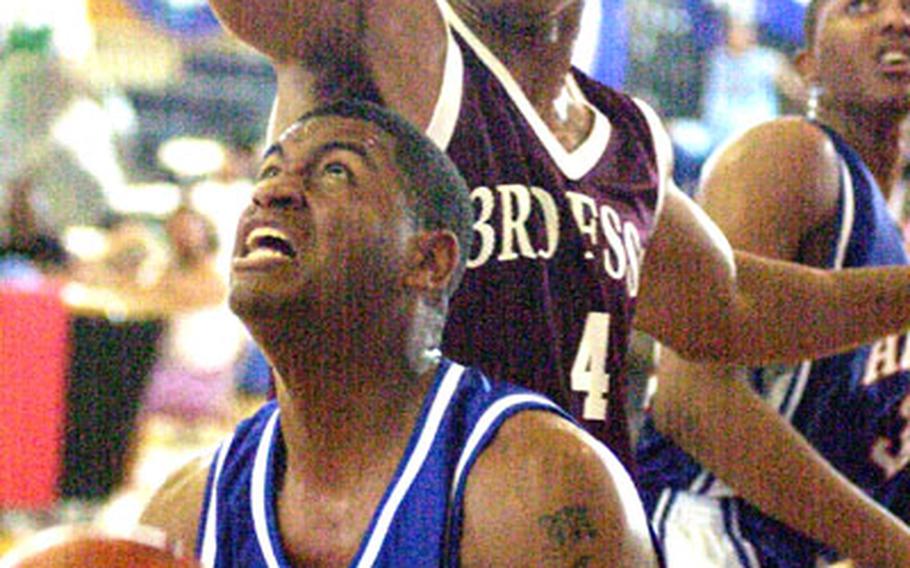 Based on Wing&#8217;s performance Monday as the tournament opened, this might be Cochran&#8217;s best chance yet.

He could not have gotten off to a finer start, scoring 20 points to go with eight assists and six steals against Division, which won the title in 2000 and last year. The 2001 tournament was called off in the wake of Sept. 11.

Entering the tournament as two-time champion must have felt like wearing a bull&#8217;s-eye for Division, which later led by as many as 14 points in the first half before losing to Marine Corps Base Camp Butler 82-72.

Despite that experience, Toney said his team is not as loaded as it appears. All-Tournament player Richard Meyers is gone, and defensive stalwart Orven Wooten was sent on deployment at the last minute.

Hawaii pours it on against outmanned corpsmen

How much pouring it on is too much?

That was the question asked by many an observer Monday after watching Marine Corps Base Hawaii roll up 83 second-half points en route to a 131-41 rout of U.S. Naval Hospital Camp Lester.

Though it had all the appearance of Hawaii running up the score, coach Garland Woodard insisted that couldn&#8217;t be further from the truth.

&#8220;We didn&#8217;t want anybody getting hurt,&#8221; Woodard said of a relentless press-and-transition strategy that kept his players running and from relaxing against Hospital, which suited up six players.

The corpsmen didn&#8217;t have the legs to stay with Hawaii, player-coach Eric Shropshire said.