Wiesbaden’s Harris out to make a lasting impression 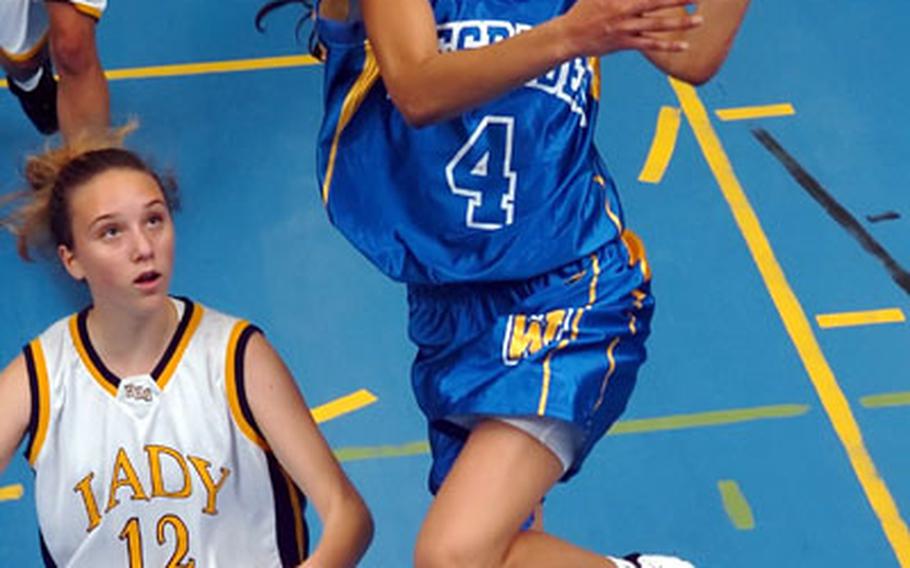 Wiesbaden&#39;s Brittany Harris glides to the hoop past Heidelberg&#39;s Fallon Puppolo for a layup during the teams&#39; opening game of the DODDS-Europe high school basketball season. The 5-6 guard is scoring at a 20-point clip four games into the current campaign. (Raymond T. Conway / S&S)

WIESBADEN, Germany &#8212; With the end in sight, the picture has come into focus for Wiesbaden senior Brittany Harris.

The realization set in during volleyball season. Harris, always an effective player, elevated her game enough to make the All-Europe second team this year, and the impetus of that has carried over to basketball. The 5-6 guard, who averaged just over 14 points per game last season, is scoring at a 20-point clip four games into the current campaign.

The increased production has proved vital to an inexperienced Wiesbaden team. Although the Lady Warriors dropped two decisions to Division I contender International School of Brussels last weekend, Harris sees lots of positives for this year&#8217;s team, which beat Heidelberg on the road in its opener Dec. 2 and dropped a two-point decision to Ramstein the next day.

Harris was a large part of that process, according to her coach, Jim Campbell.

For her part, Harris is glad to contribute.

&#8220;I like it all,&#8221; she said of the game her father, retired soldier James Harris, has been teaching her since grade school, &#8220;but I like to play defense. I like for the other player to know that I can defend her and go to the hole. I like getting on a girl and making her turn the ball over.&#8221;

When Harris does get the turnover, Campbell said, she does it against the best the opposition has to offer.

Harris gave a glimpse of her mindset on Monday, when it was observed that a basketball drill that involved merely slapping the floor must be more enjoyable than the belly-flops to the hardwood volleyball drills require.

And on the court. Harris said she&#8217;d use the winter holidays to hone her game in daily workouts against her father.

Can she beat him yet?

Harris has simple goals for her final high school season, both personal and team.