Well-armed teams should have the advantage 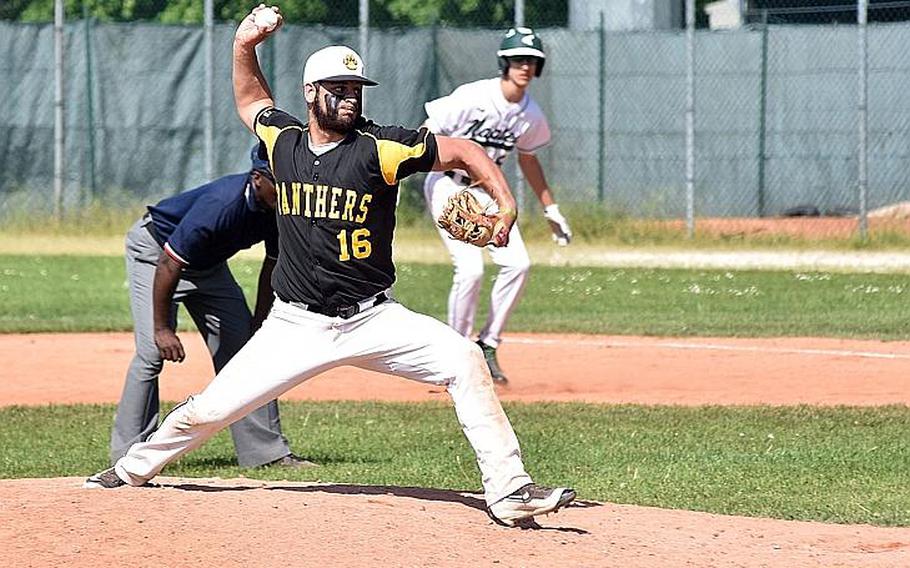 Stuttgart's Gabe Simpson delivers a pitch toward home on Friday, April 27, 2018, in a game against Naples. (Kent Harris/Stars and Stripes)

Stuttgart's Gabe Simpson delivers a pitch toward home on Friday, April 27, 2018, in a game against Naples. (Kent Harris/Stars and Stripes) 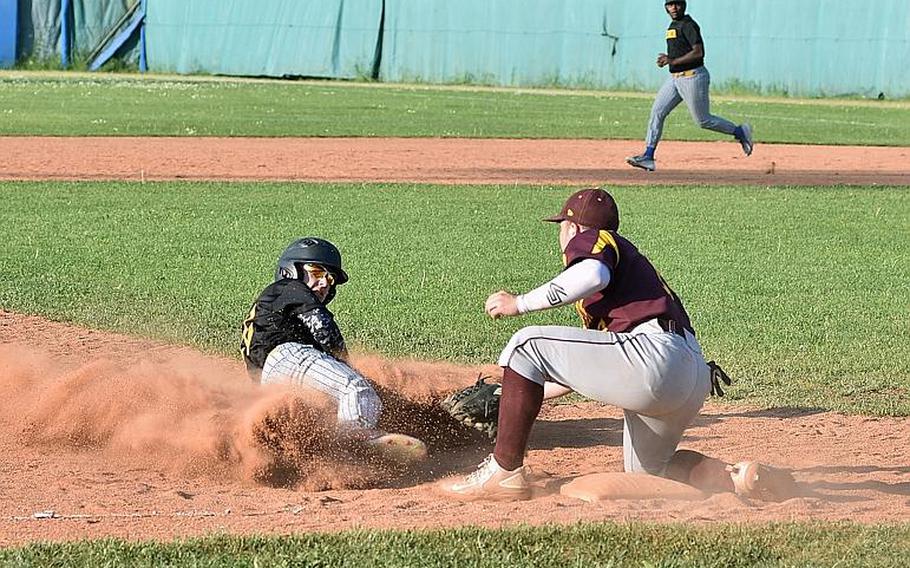 Vicenza's Jesse Samsel created a nice cloud of dust while sliding into third base, but Vilseck's Jordan Leighty tags him out in the Falcons' 6-3 victory on Friday, April 27, 2018. (Kent Harris/Stars and Stripes) 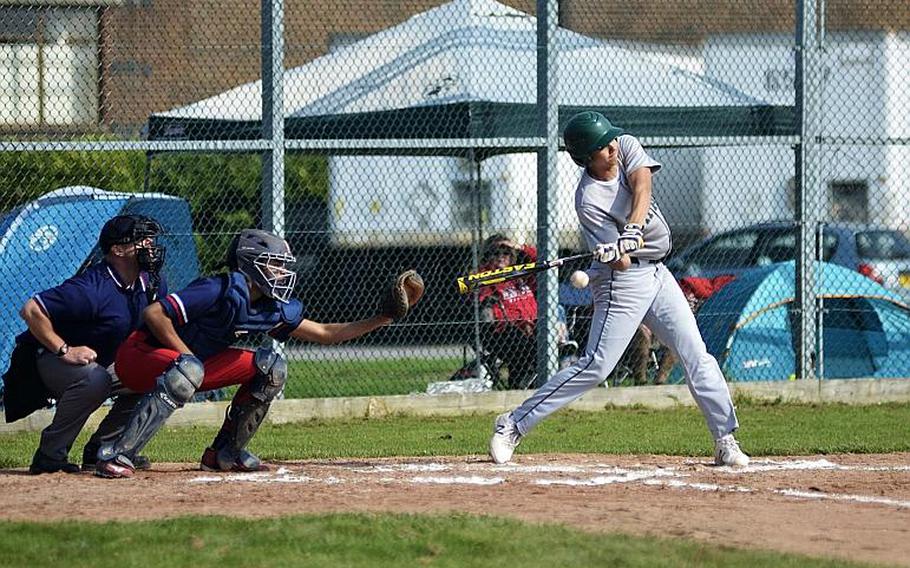 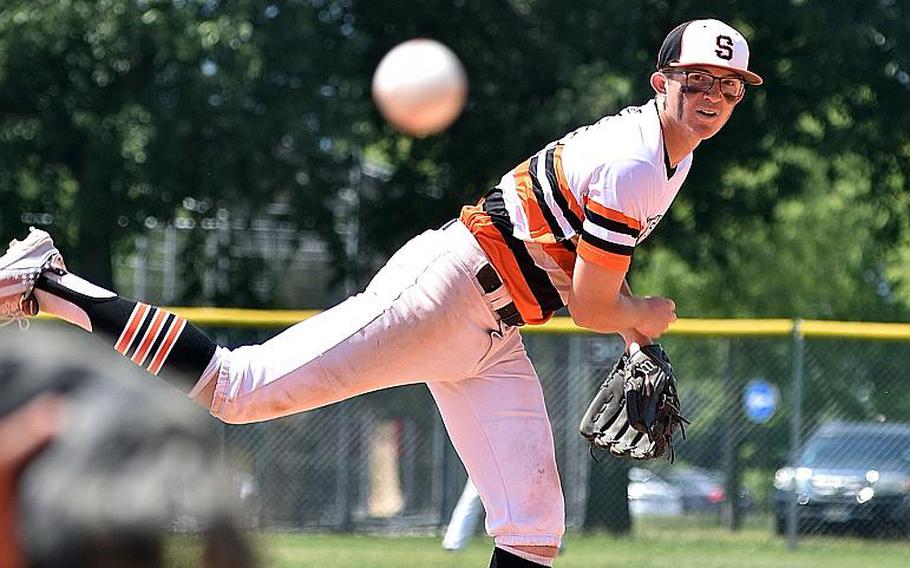 Spangdahlem ace Max Little watches his pitch approach home plate in the Sentinels' 6-4 victory over Aviano on Saturday, May 12, 2018. (Kent Harris/Stars and Stripes) 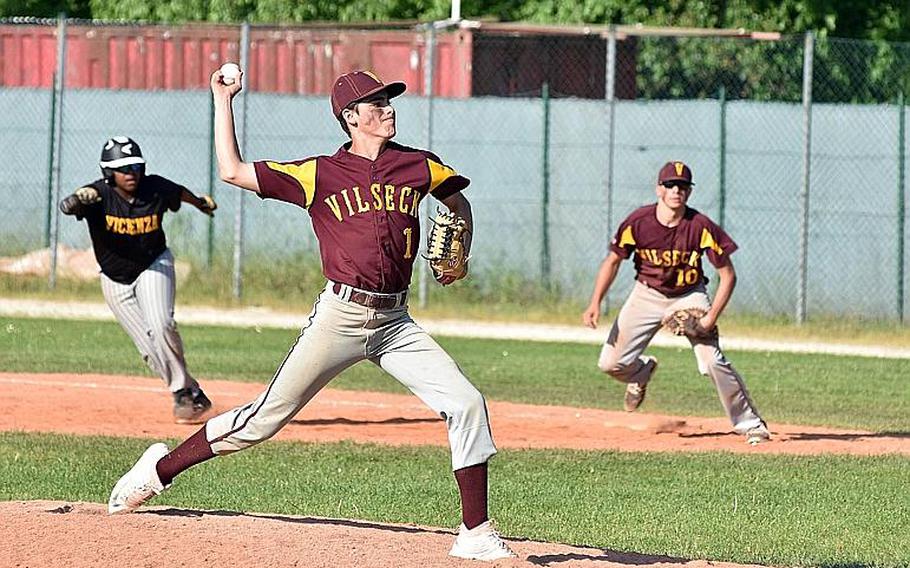 It’s all hands on deck for the 2018 DODEA-Europe baseball tournaments, running Thursday through Saturday at Pulaski Barracks in Kaiserslautern, Germany, and nearby Ramstein Air Base

The depth and quality of teams’ pitching staff will again be the major determining factor in the Division I and II/III brackets as contenders tangle with DODEA-Europe’s strict policies on pitch count and rest in addition to their on-field opponents.

Preliminary play runs Thursday and Friday in both tournaments, setting up Saturday morning semifinals followed by the Division II/III and Division I championship games starting at 1:30 p.m. at Ramstein’s Southside Fitness Center.

Division I Nearly every team in the division has a signature win to its name. None have survived the season without at least a handful of losses.

In short, the 2018 Division I baseball tournament is the most unpredictable in many years.

Teams that would be elimination-round shoo-ins in other seasons are looking at a high variance of outcomes this spring, as likely to earn a spot in Saturday’s final as see its season end Friday afternoon.

From one perspective, the Ramstein Royals have continued their regression to the DODEA-Europe mean with a middling regular-season performance including losses to several key contenders. That continues a trend from the 2017 season, when Ramstein saw a years-long winning streak end and its sheen of invincibility fade.

The Royals, however, ended that uncharacteristic season in its typical fashion - claiming another DODEA-Europe Division I championship, their fifth consecutive. The possibility that this imperfect season ends with a similar scene can’t be discounted, and Ramstein’s young roster seemed to assume its final playoff form on the last weekend of the regular season in a sweep of the archrival Kaiserslautern Raiders.

Still, Ramstein faces challenges from all of its neighbors in southwestern Germany.

Despite stumbling against the Royals, Kaiserslautern remains a squad capable of putting it all together for a title run this week. The Raiders will need to shake off the unsettling Ramstein setback and recapture the swagger of its dominant swing through Italy a week prior.

The Stuttgart Panthers typify the evenly matched nature of the large-school baseball bracket, having played all of Wiesbaden, Ramstein, Kaiserslautern and SHAPE to doubleheader splits in the regular season.

The Wiesbaden Warriors have experienced similar highs and lows. The former includes a convincing April 28 sweep of SHAPE, the latter a pair of losses to Ramstein in March.

Threats from the north and south further populate the Division I title picture.

The Lakenheath Lancers landed the spring’s cleanest blow on the defending champions in an 8-2 and 10-4 sweep of the Royals on May 12.

The SHAPE Spartans split with Ramstein to open the season and swept regional rival Lakenheath in April.

The Naples Wildcats will look to shake off a late-season swoon and recapture the form of their six-game season-opening winning streak.

The struggling Vilseck Falcons and Vicenza Cougars, meanwhile, can introduce another level of intrigue into the tournament with a strong tournament showing.

Division II/III The small-school defending champion Sigonella Jaguars have one of the division’s largest stables of reliable pitchers, giving them a solid chance to survive the five-team round-robin preliminaries without overusing their top guys. An occasionally explosive offense - the Jaguars scored 19 runs over two defeats of the Rota Admirals in their final divisional set May 11 and 12 - should help in that regard.

While the Jaguars bring a solid 9-3 divisional record into the tournament, they’re not a runaway favorite in this bracket.

The Aviano Saints are responsible for two of Sigonella’s three divisional losses. The Hohenfels Tigers edged Sigonella 9-8 in an April 27 meeting and played them tough in a 4-2 loss the next day.

And perhaps the biggest threat to a Jaguar repeat is a team they haven’t seen this spring but know very well from years past.

The Spangdahlem Sentinels, then known as the Bitburg Barons, reached last year’s championship game before their pitching ran out in a 10-1 Sigonella win. The revamped returning runner-up flashed its chops in a tournament setting when it swept Aviano over two hectic days in mid-May.