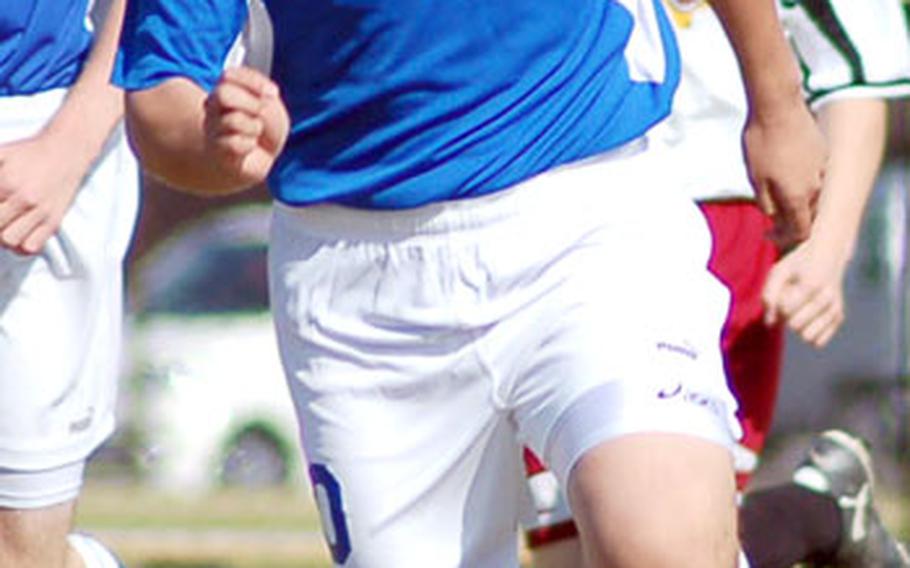 Yokota center-midfielder Stefan Welch has a Pacific-leading 23 assists to go with 12 goals, but says he just wants to help the team win. (Courtesy of Vanessa Gempis)

If assists are about helping teammates shine, then the Yokota Panthers&#8217; Stefan Welch is the Japan Soccer League&#8217;s truest measure.

Pujol said that epitomizes Welch as player and person. &#8220;He has a really good understanding of the game,&#8221; Pujol said.

Welch, who&#8217;s lived in Japan almost all his life and has played for off-post Japanese club teams, &#8220;sees the game really well. He would love to score goals but he is really interested in distributing the ball,&#8221; said Pujol.

Welch plays center-midfield &#8212; what coaches term the &#8220;general&#8217;s position.&#8221; The do-everything player directs traffic, sets up plays and can be called on to strike or drop back and defend.

Pujol said Welch&#8217;s assists are a true indicator of how well he &#8220;sees the field and gives his teammates so many opportunities to score. And he has a strong leg, both right and left; that&#8217;s a plus. All his skills you would put mostly in the offensive category.&#8221;

Assistant coach Reinhold Geist of JSL rival Zama American calls Welch a &#8220;triple threat:&#8221; He can pass, dribble around defenders or launch a deadeye shot from 30 yards over defenders at the net.

Pujol agrees it may be his most balanced team but said his charges need work before hosting the Class AA tournament May 15-19.

And indications to date are that wherever the team might move, Welch will be in the middle of the field and the action.