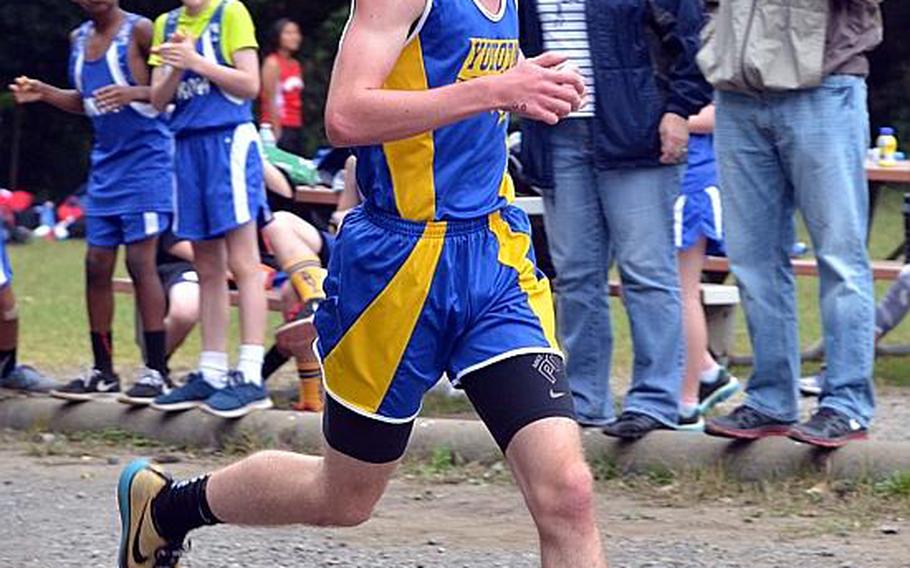 This season was pretty much what Yokota senior Daniel Galvin had envisioned of his junior cross country campaign.

Galvin accomplished all that he’d hoped to wearing Panthers Royal Blue and gold, capturing the DODDS Japan, Kanto Plain and Far East titles and setting a course record in the latter event.

It was all stuff that the younger Galvin wanted a year sooner. But sidelined by a stress fracture in his shin that kept him out of all three events, he felt more grateful for having accomplished all that as an exit.

“I was more determined, more focused” in his senior season, Galvin said. “I don’t think the year would have gone as well” had he not missed the crucial part of his junior year. “This year was so much sweeter, coming back from everything I went through.”

For all his accomplishments, Galvin has been named Stars and Stripes Pacific high school boys cross country Athlete of the Year for the second straight year – and for much different reasons than last year.

It all started out so well, hitting sub-15-minute times at Tama Hills west of Tokyo thrice and his personal 5-kilometer record of 16:08 in a Sept. 20 meet. But it all came apart with the stress fracture.

“You can’t be full throttle every second,” Galvin said. “You can overdo anything if you work too hard. Sometimes, you need to take a day off and relax.”

And so he did during the 2015 season. One difference Galvin said he noted was that he “topped out” after three weeks of his junior season and didn’t go any faster; whereas this season, he hadn’t come in “in the best of shape,” dealing with an ankle sprain.

“It forced me to build up and peak later this time,” Galvin said.

That meant clocking 17:49 on the 5,200-meter Citizens Park course in Misawa during the DODDS Japan finals on Oct. 17.

A week later, on the lower course at Tama Hills, he ran a Pacific season-best 16:29.9 in the Kanto Plain finals.

Then came the Far East meet in rainy, windy, frigid conditions at Camp Fuji, where Galvin broke the old course record by nearly 20 seconds, clocking 16:52.03. As he crossed the finish line, tears began forming in Galvin’s eyes, he said.

With his senior cross country season in the hard drive, Galvin now turns his attention to track season. He holds the Pacific record in the 800 (1:55.54) and 1,600 (4:23.42), which he says he plans to challenge after beating his own personal best on Fuji by 57 seconds.

“I’m really excited to see what kind of shape I’m in going into track,” Galvin said.