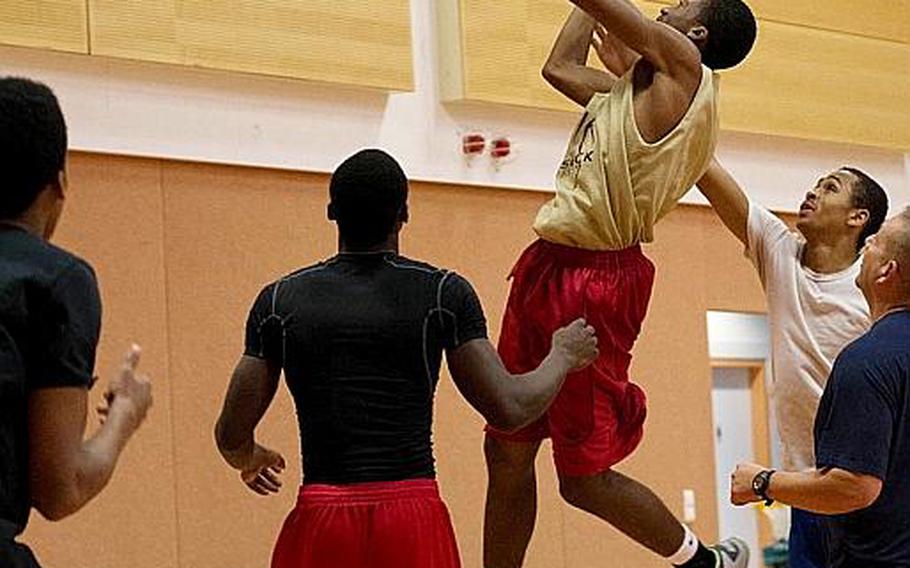 Jamar Walker goes up for a layup while his teammates and coach look on during a practice. (Michael Darnell/Stars and Stripes)

Jamar Walker goes up for a layup while his teammates and coach look on during a practice. (Michael Darnell/Stars and Stripes) 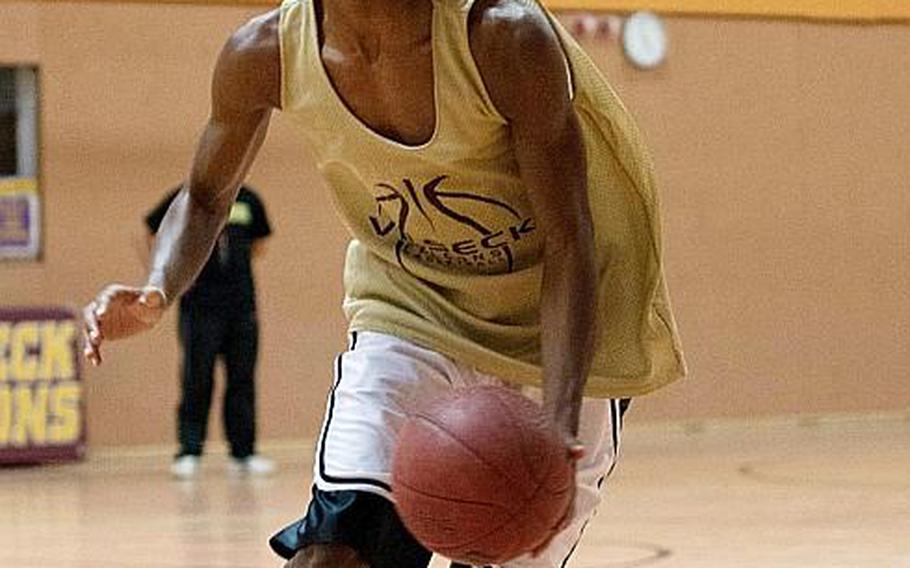 David Harris, Vilseck's rising star, drives to the basket during a practice. (Michael Darnell/Stars and Stripes) 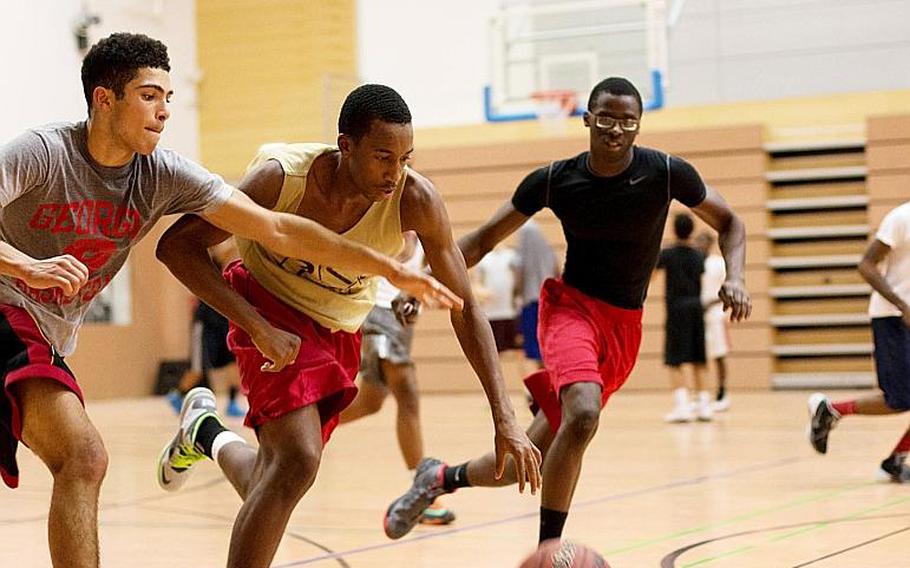 The Vilseck Falcons are 1-4 on the season, but look to improve in time for the DODDS-Europe tournament with a healthy dose of practices, drills and mentoring from coach John Sabala. Here, the players practice full-court press defense. ( Michael Darnell/Stars and Stripes) 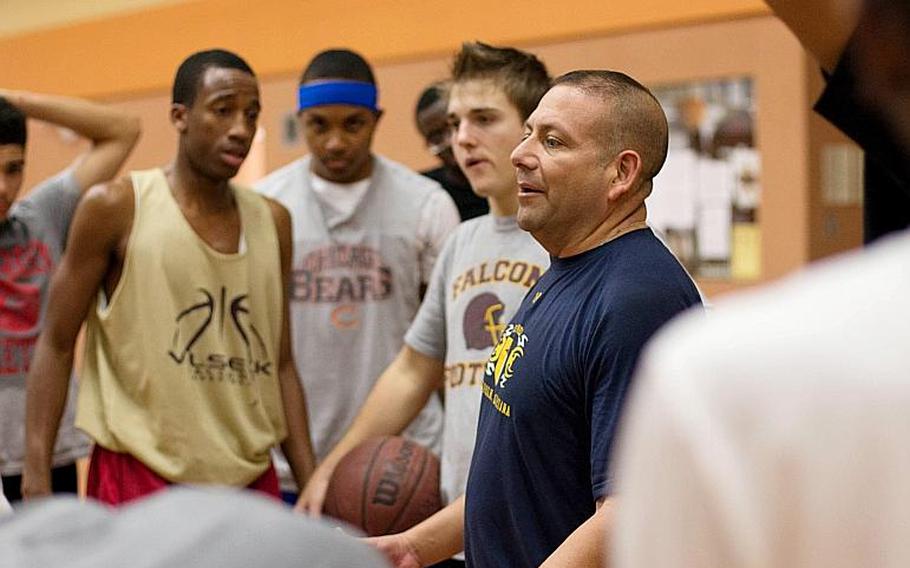 The Vilseck Falcons gather around coach John Sabala for an impromptu lesson on avoiding turnovers during a practice session. ( Michael Darnell/Stars and Stripes)

At its core, basketball can be reduced to simple, repeatable and teachable actions.

Turn and box out.

Find the open man, and actually make the pass.

But behind all of these tangible acts lurks something more elusive, a skill not easily demonstrated or reinforced. If not mastered, it can undermine every hour of instruction spent on the sport’s fundamentals.

It is the skill of winning.

Vilseck boys basketball coach John Sabala has spent his winter attempting to define and address this mysterious skill. Each practice, Sabala looks around the court and sees the components of a winning team. His Falcons have playmaking and scoring in the backcourt and productive starters and backups at each position. They have senior leadership and experience. They’ve adopted a fast tempo and largely bought into their coach’s emphasis on defense.

And yet Vilseck enters this weekend on a four-game losing streak, with all of those losses coming to some of the fellow Division I teams it will have to beat to have any impact on next month’s European tournament. The team’s only win, back in its Dec. 13 season opener, was a marginally-satisfying rout of Division II Ansbach.

On two of those occasions, the gap separating Vilseck from victory has been agonizingly thin. Before the holiday break, the Falcons hung close with unbeaten Wiesbaden before taking a 70-64 loss; last Saturday, in their first weekend back, they lost to defending Division I champion Patch 67-65.

For Sabala and his players, such games are maddeningly ambiguous. They are encouraged by competing so vigorously with DODDS-Europe’s best teams, but equally flummoxed by their inability to convert winnable games into actual wins.

“I lose sleep those nights trying to figure out how to get these young men over the hump,” Sabala said.

Some of the problem is easily diagnosed. The team’s free-throw shooting percentage is hovering around 50 percent. Turnovers have plagued the team all season; the Falcons squandered 33 possessions in a less-competitive 66-44 loss to Patch on Jan. 10.

“If we cut down our turnovers and make a few more free throws, we’ll be a nightmare for anyone we come up against” at the European tournament, Sabala said.

But those statistics alone don’t explain Vilseck’s frustrating season. And the Falcons’ upperclassmen leaders are just as preoccupied as their coach with solving the ongoing conundrum.

Senior guard David Harris is playing his first season with Vilseck after transferring from a varsity program in Texas. A gifted athlete and explosive scorer, Harris has dedicated himself to the task of weaving his considerable individual talents into the team-first approach he knows is required for success.

“I feel like I could distribute a little bit more. The points, I just let them come to me. I don’t try to force it,” said Harris, who scored 27 points in the Falcons’ two-point loss to Patch last weekend.”The offense doesn’t run through me. It’s a team game.”

Like Harris, Khayree Files is a dynamic guard spending his first and only season with Vilseck after transferring from nearby Schweinfurt. The point guard attempted to define the murky circumstances that have led to his team’s late-game struggles and the resulting triumphs of Patch and Wiesbaden.

“Executing at the end of the game was a big difference,” Files said. “They had the mind of winning. We just kind of let it go.”

Junior Gabriel Lewis, one of the few returnees from last year’s 6-8 team, agreed with that assessment.

“Passing under pressure, not trying to force things that aren’t there in the later part of the games. That’s what kills us,” Lewis said. “We need to play how we play the whole game in that last two minutes.”

Despite his team’s two wins over Vilseck, Patch coach Brad Rehwaldt is very much aware of the threat the Falcons pose if they eventually clear the mental and tactical hurdles currently blocking their path.

“With the size and quickness they have, they have the ability to frustrate opponents. Their defense is as good as any we have faced,” Rehwaldt said. “They are athletic, aggressive and well-coached.”

Eventually, the Falcons believe, all of those good qualities will add up to something more substantial – a simple notch in one column instead of the other.

Each shot will be made or missed. A thrown pass might become an assist or a turnover. But winning, on an individual level, defies easy evaluation. Sabala won’t arrive at practice one afternoon to find that a handful of his players have suddenly mastered the skill as they would a pick-and-roll or a taken charge. It’s an ongoing process, a stew of individual decisions and team psychology, each player’s progress deeply knotted with that of his teammates.

“They know that they can play with any of the Division I teams and that they have the ability to win,” Sabala said. “It’s going to be a matter of getting that breakthrough.”