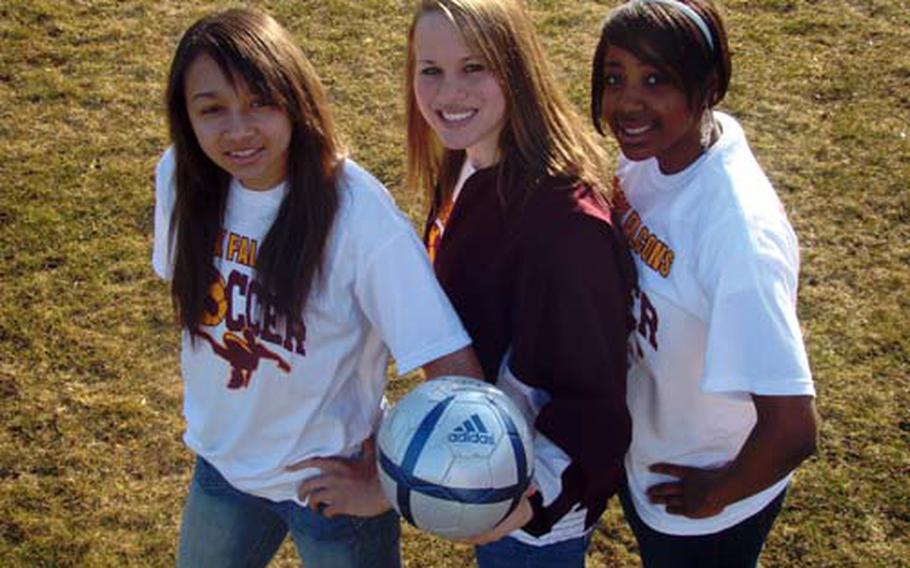 Four-year Vilseck basketball and soccer teammates, from left, Shamyra Coleman, Stevi Hood and Tamaria Hollis, are eyeing a second European soccer championship in their final campaign for the Falcons. (Courtesy of Brian Swenty)

Most high school students try their hands at chemistry, but in DODDS sports that other kind of chemistry &#8212; the bonding athletes derive from playing together throughout their high school careers &#8212; isn&#8217;t on the syllabus.

Except perhaps in Vilseck, Germany, where seniors Shamyra Coleman, Tamaria Hollis and Stevi Hood just finished their fourth year of playing basketball together and just embarked on their fourth straight soccer season as a unit.

"In the States, most people play together at the same school all their lives," Hood, who switched from defense to goalkeeper for the team&#8217;s first season in Division I, said Monday by telephone. "We have that same kind of bond."

It&#8217;s a bond most DODDS-Europe teams never experience, according to Hollis, an All-Europe midfielder in 2008 who has watched Vilseck grow from a 2006 European D-II championship club into a D-I contender today.

"We&#8217;ve been playing together since my freshman year," Hollis said while wending her way to a four-day Future Business Leaders of America conference in Garmisch. "In DOODS, we don&#8217;t often get the chance to do that, and having those two guys with me all that time is really good."

Coleman, a forward who has scored eight goals in her first three games this season, as might be expected, agreed with her longtime teammates.

"It&#8217;s fun to meet new people," she said by telephone Monday, "but the chemistry of the old people helps lead the team."

On and off the field.

On the field, the three lead the 2-1 Falcons with a division of labor, according to Vilseck coach Brian Swenty, who took over the team this spring.

"Stevi, as the keeper, runs that whole half of the field," Swenty said by phone. "Tamaria is our field general, planning the offense and playing defense. Sometimes, we drop her back to sweeper. She steadies everything."

"Shamyra is blinding," he said. "Even though she&#8217;s so fast, she still has the finesse to create and exploit openings. She&#8217;s at a different level. She was triple-teamed at Kaiserslautern (a 4-3 Vilseck loss Saturday) and still scored three goals. She wears the opposition down. She&#8217;s one of those people who has to be constantly moving."

Meshing the trio&#8217;s skills and responsibilities, Hollis said, is a natural process, thanks to the bond.

But not for much longer.

Hollis, who plays with a German club soccer and in the Olympic Development Program, is bound for Southwest Baptist University in Bolivar, Mo., next year on a soccer and academic scholarship. She will test her skills at the NCAA Division II level.

Hood is bound for Winthrop University in Rock Hill, S.C., and is contemplating walking on in golf.

And Coleman, "will probably go to school somewhere in Georgia," she said.

"She could pick her sport," he said. "Maybe at 5-8 she&#8217;s too short for Division I basketball, but she has that kind of athletic ability that doesn&#8217;t come around all the time."

With their futures at the next level more or less certain, all that&#8217;s left in Vilseck for Coleman, Hollis and Hood is a run at another soccer crown, to be followed by the sad business of bond-breaking.

"We knew it was going to end sometime," Hood said. "But after playing on eight varsity sports teams with one another, it&#8217;s going to be emotional that last game."