Vilseck's Silden proved herself on field, then in dugout 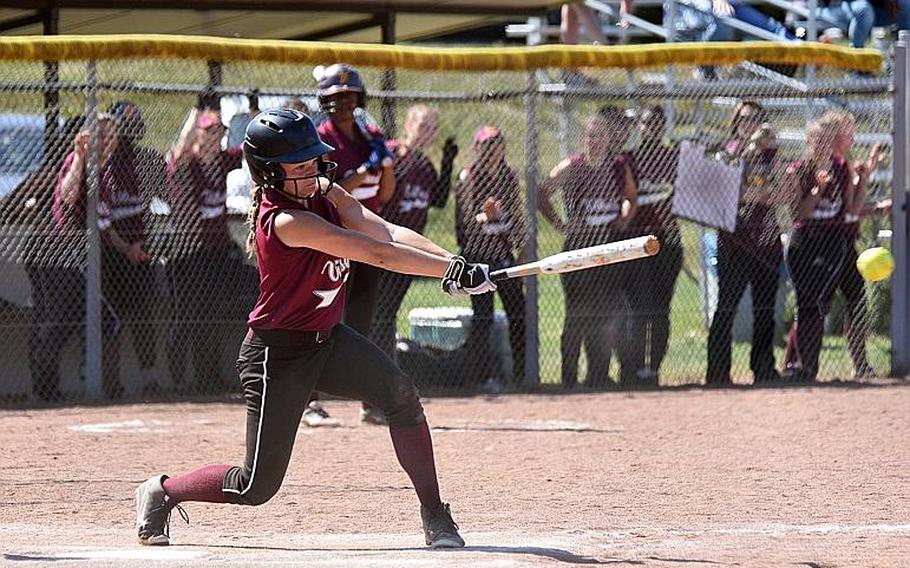 Vilseck's Kayla Silden hits the ball in a game during the first day of the DODEA-Europe softball championships in Kaiserslautern, Germany, Thursday, May 25, 2017. (Martin Egnash/Stars and Stripes)

In softball, as in any high school sport, senior leadership is key. If they’re up to the task, a senior can set an emotional and psychological tone for a team, instill the required work ethic and guide inexperienced teammates through adversity.

It also helps if they can really swing a bat.

Vilseck Falcons senior Kayla Silden embodied all of the intangible and very tangible aspects of a senior leader this spring. As a result, she is the 2018 Stars and Stripes softball Athlete of the Year.

Silden was the only starter back from the 2017 Falcons, a team that reached the Division I semifinals. Coach Jim Hall made it clear that she was the key to another successful season.

“I just told her, ‘We’re going to depend on you for leadership. We really need you to work with the young kids and bring them up towards your level, because if we win or lose will depend on that,’” Hall said.

Silden took some time to find her voice. Hall said Silden “tried to be a quiet leader,” but ultimately “had to say a lot more than she wanted to.” Silden explained that she needed to find a comfort level with her younger teammates before presenting herself as an authority figure.

“I had to learn who they are in order for me to know what to do.”

Silden’s credibility as the Falcons’ leader rested in large part on her ability to perform on the field, and there was no adjustment period at all in that regard. She produced a .633 batting average this spring, scoring 46 runs and driving in 32 more, while leading the Falcons back to the European semifinal round.

“I had to step up as a player as well,” Silden said. “If I’m the captain of the team, I need to do better and work harder than the rest of the players.”

By deed and, eventually, word, Silden was exactly the senior the Falcons needed.