Buy Photo
SHAPE's Trent Castro drives the ball upfield in the Division I final against ISB last season. Castro will be returning for the Spartans as they try to defend their title. (Michael Abrams/Stars and Stripes)

Buy Photo
SHAPE's Trent Castro drives the ball upfield in the Division I final against ISB last season. Castro will be returning for the Spartans as they try to defend their title. (Michael Abrams/Stars and Stripes) 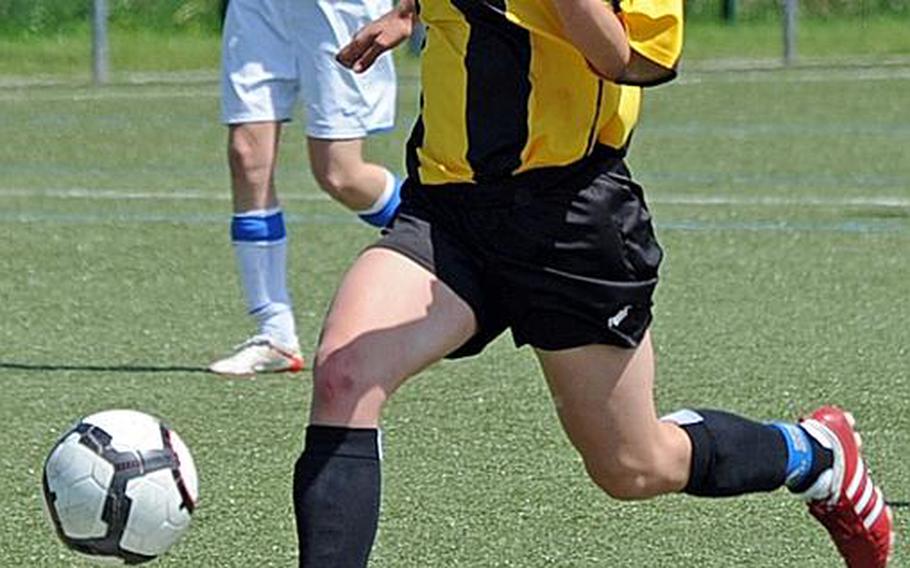 Buy Photo
Patch's Alysia Verones drives the ball upfield in a girls Division I semifinal game at the DODDS-Europe soccer finals last season. She will be returning this year to help the Lady Panthers defend their Division I title. (Michael Abrams/Stars and Stripes) 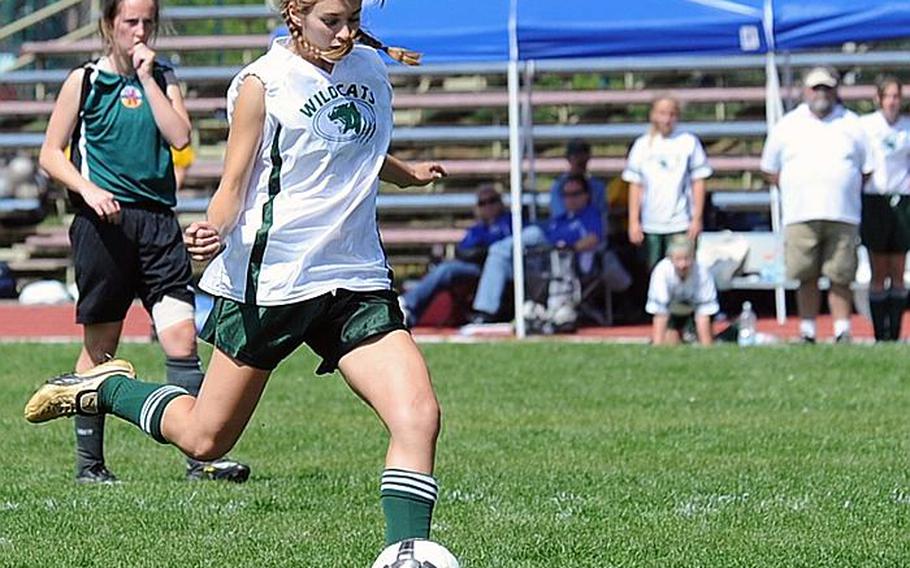 Buy Photo
Sofia Cianciaruso of Naples shoots her game-tying 2-2 goal in the Division II championship game against AFNORTH last season. Cianciaruso, who will be returning for the Lady Wildcats this season, later scored the game-winning goal. (Michael Abrams/Stars and Stripes) 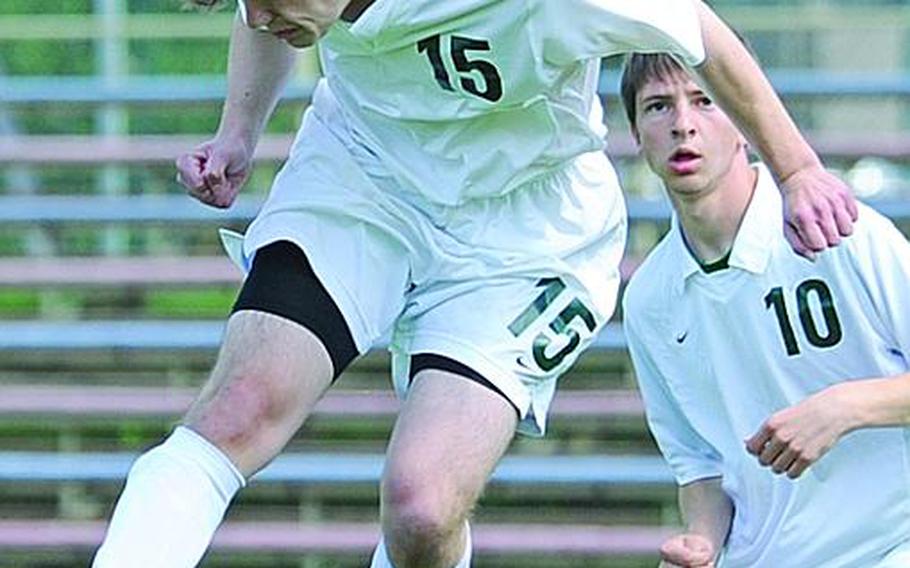 Buy Photo
Alconbury's J.J. Black gets off a header against Ankara in the Division III finals at the DODDS-Europe championships in May. Black, selected to the 2010 All-Europe soccer squad, will be back this season for the Dragons. (Michael Abrams/Stars and Stripes) 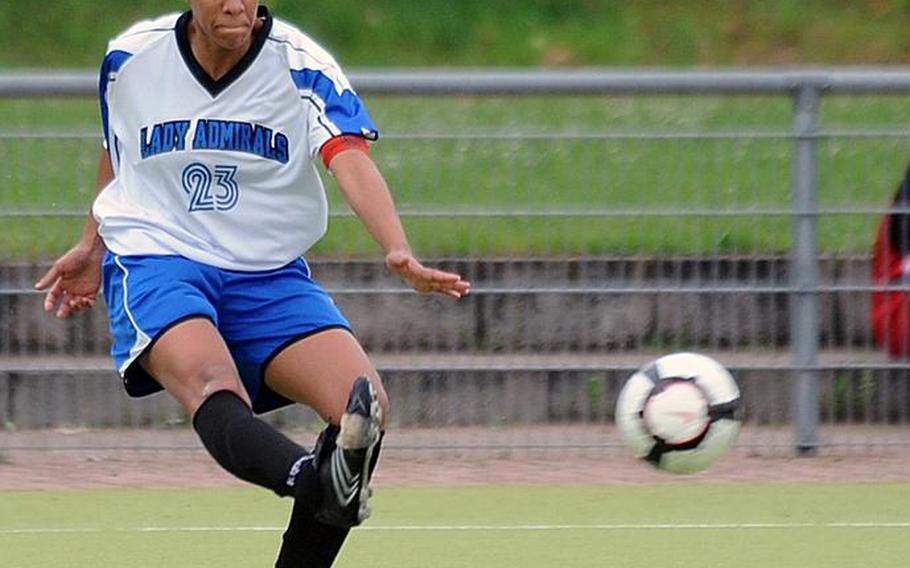 Buy Photo
Rota's Bri'anna Am'mons sends a pass upfield at last years soccer championships. The only Division III player to make the 2010 All-Europe team, she will be returning this season to help the Lady Admirals defend their Division III title. (Michael Abrams/Stars and Stripes)

When the 2011 high school soccer season kicks off Saturday, there&rsquo;ll be no lack of quality teams and quality players.

Nineteen of the 30 first- and second-team all-Europeans of each sex in 2010 were underclassmen. And despite the usual attrition created by change-of-station moves, 12 female all-stars and about as many All-Europe boys return for this season.

Unfortunately for schools wishing to challenge last year&rsquo;s champions, a disproportionate number of those standouts are returning to teams that won European titles in 2010.

SHAPE&rsquo;s Division I boys, for example, welcome back Manuel Vela (seven goals, six assists in 2010) and Trent Castro (eight goals, four assists), along with a dozen seniors, according to new coach Tony Harris.

Harris, whose last DODDS coaching experience was in Japan, replaces DODDS Europe legend Tony Blasio. Blasio had guided the Spartans since the 1960s and led the team to the D-I title last May in the school&rsquo;s first campaign at that level.

In Division II, senior All-European Sofia Cianciaruso, the midfielder who converted a 40-yard free kick into the title-winning goal against AFNORTH last May, suits up again for Naples. And while AOSR&rsquo;s three All-Europeans all graduated, the perennially contending boys team is loaded with replacement candidates, according to head coach Anthony DeNicola. They include junior Pietro Dinmore and freshman Francesco Dinmore, younger brothers of one of the 2010 all-star grads, and &ldquo;sophomore sensation&rdquo; Lucas Miller, a midfielder.

So is star power likely to prevail in 2011? Here&rsquo;s the consensus:

Nukala provided his own take on the race in an e-mail last week.

&bull; Division I girls: With its quartet of stars, Patch figures to repeat, but Ramstein, which can field a returning All-European in defender Mackenzie Crews, always poses a threat. Heidelberg, which took Patch to overtime in last year&rsquo;s title game, is rebuilding after losing three All-Europeans.

&bull; Division II boys: According to Hohenfels coach Shawn Rodman, the power in D-II lies in the private schools.

&ldquo;&hellip; to look at the front-runners for Division II, I think you have to look to Italian schools (AOSR and Marymount) and probably BFA, which is always good,&rdquo; e-mailed Rodman, whose own Tigers welcome back seven-goal, six-assist All-Europe senior midfielder Patrick Junior.

And then there&rsquo;s the sentimental favorite, Mannheim, led in its final season of all time by All-Europe junior sweeper Amber Veranen.

&bull; Division III girls: With those nine returning starters, look for Rota to repeat. No one else, on paper at least, can match that sort of experience. Unless it&rsquo;s Menwith Hill, bolstered by sisters Arielle and Brianna Rogers, who transferred in, and returners Kaia Pierce, Monique McCreary and Rachael Solini.