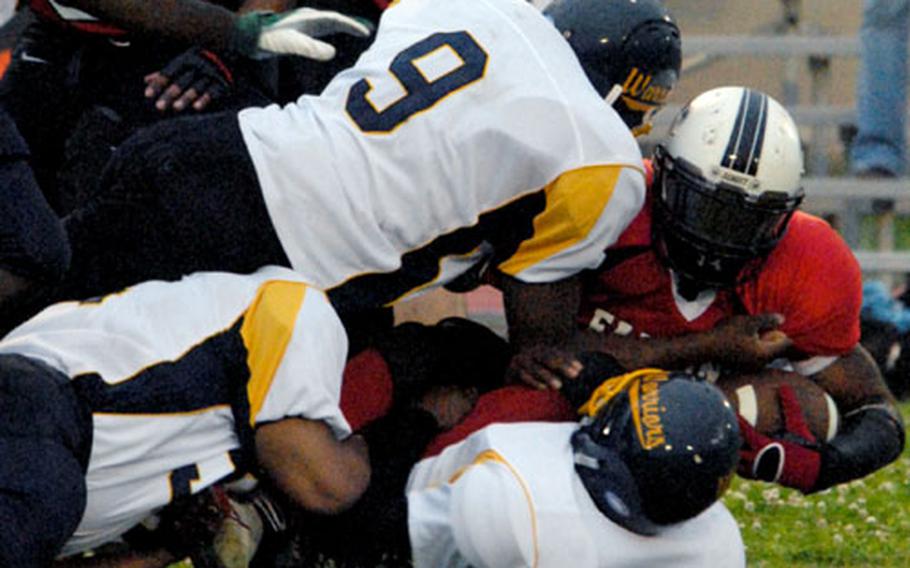 YOKOTA AIR BASE, Japan &#8212; Quarterback Jacob Dowdell and the Yokota Warriors have traversed this road before &#8212; more times than they care to remember.

Dowdell ran 2 yards for a touchdown and passed 10 yards to Bruce Turner as the Warriors rallied for the second straight week, scoring 20 points in the second quarter on the way to a 20-3 victory over the Atsugi Falcons on Saturday.

The victory put the Warriors alone in first place atop the U.S. Forces Japan-American Football League standings. Yokota is 2-0 for the third straight season &#8212; but in 2004, a 4-0 start preceded a three-game losing streak, and last year&#8217;s 4-0 start served as a prelude to a 30-21 Torii Bowl loss to Misawa to close another heartbreaking year.

As in the Warriors&#8217; 8-6 season-opening victory over Misawa on June 3, Yokota fell behind early. A fumble recovery by Atsugi&#8217;s Chris Perry at the Yokota 13-yard line set up a Patrick Oliveri 27-yard field goal to open the second quarter. It would be Atsugi&#8217;s deepest penetration of the contest.

The Warriors stormed right back, with Kevin Hill carrying three times for 40 yards, helping set up the Dowdell-to-Turner TD combo that gave Yokota the lead for keeps. Hill ran 2 yards for a touchdown on Yokota&#8217;s next drive.

Then came the backbreaker: Mardie Wilson blocked an Atsugi punt and fell on the ball at the Falcons&#8217; 2-yard line. From there, Dowdell ran in a quarterback draw for the game&#8217;s final margin just before halftime.

But take away that second period, and the last 7:48 of the game in which Yokota possessed the ball, and it was an even contest, Dowdell said.

In the end, Yokota outgained Atsugi 232-78, holding the Falcons&#8217; running game to just 2 yards on 17 attempts. The Falcons lost for the second time in two games this season and for the 18th straight time dating back to 2003.

Atsugi quarterback Barry Smith went 14-for-26 for 90 yards, completing eight passes to J.J. Jones for 45 yards and four to Mario Cruz for 28 yards. Adrian Knight and Charles Hunt each intercepted one Dowdell pass.