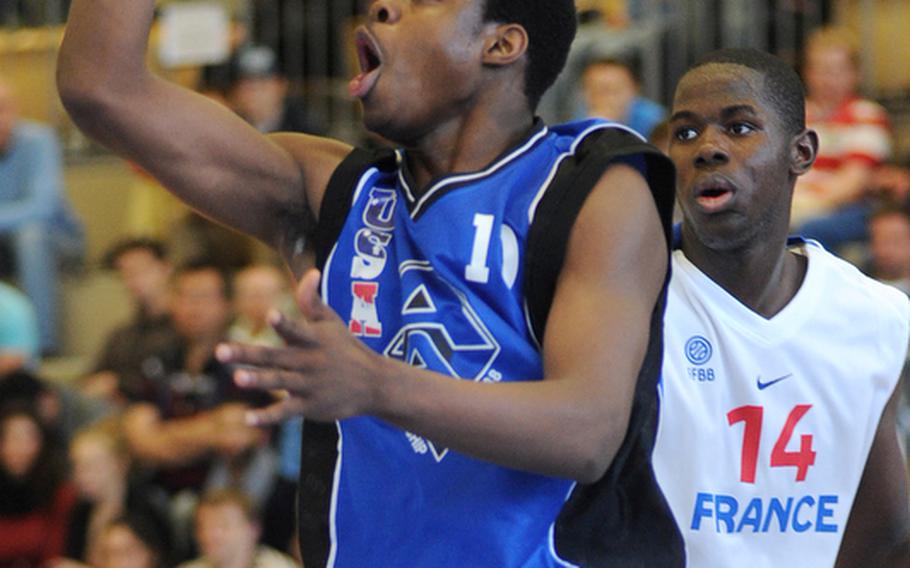 Buy Photo
Derrick Walton Jr. of the U.S. gets past France's Mouhamadou Jaiteh for two of his 20 points in the Americans' 87-81 victory over France at the Albert Schweitzer Tournament in Mannheim, Germany, Saturday. (Michael Abrams/Stars and Stripes)

Buy Photo
Derrick Walton Jr. of the U.S. gets past France's Mouhamadou Jaiteh for two of his 20 points in the Americans' 87-81 victory over France at the Albert Schweitzer Tournament in Mannheim, Germany, Saturday. (Michael Abrams/Stars and Stripes) Buy Photo
Stevie Clark of the U.S. shoots over France's Tristan Toneguzzo for two of his four points in the U.S.'s 87-81 victory over France at the Albert Schweitzer Tournament in Mannheim, Germany, Saturday. (Michael Abrams/Stars and Stripes) Buy Photo
Derrick Walton Jr. of the U.S., right, aims for the hoop against France's Boris Dallo. Walton scored 20 points in the Americans' 87-81 victory over France at the Albert Schweitzer Tournament in Mannheim, Germany, Saturday. The Americans took seventh-place with the win. (Michael Abrams/Stars and Stripes) Buy Photo
Derek Willis of the United States stuffs the ball through the hoop to put the game out of reach as the U.S. beat France 87-81 in the seventh-place game at the Albert Schweitzer Tournament in Mannheim, Germany, Saturday. Willis scored ten points in the win. (Michael Abrams/Stars and Stripes)

MANNHEIM, Germany &mdash; The pleasant sound you heard on a diamond of a spring morning here was the winning note the U.S. team sounded in its final appearance in the 26th biennial Albert Schweitzer international youth basketball tournament, 87-71 over France in the event&rsquo;s seventh-place game.

&ldquo;Once we got started,&rdquo; said U.S. coach Butch Estes of Palm Beach State College in Lake Worth, Fla., &ldquo;we played with a lot of energy.&rdquo;

The exact point when the Americans got started was with 4:32 to play in the first period, when Derrick Walton Jr. of Harper Woods, Mich., scored to end a 15-0 French run that consumed all but the first minute of the game&rsquo;s opening 5:28. The bucket launched the U.S. on a 15-0 run of its own, capped by a three-pointer from Steve Haney Jr. of Fort Lauderdale, Fla., that put the Americans up 17-15.

It was 19-17 U.S.A. at the end of the first 10 minutes, and the U.S., on three-pointers from Collin Hartman, Darryl Hicks of Louisville, Ky., and Darian Harris of Bentonville, Ark., had expanded its edge to 28-17 before the team&rsquo;s leading scorer, Stevie Clark of Oklahoma City, made his first appearance of the morning.

Doing so much damage without Clark in the lineup spoke volumes to Estes.

&ldquo;Stevie&rsquo;s probably our leader,&rdquo; Estes said of the 5-11 point guard who scored 38 points Thursday night in a blowout loss to Russia, &ldquo;but what I liked best about this team was that every night we&rsquo;d have three or four players in double figures.&rdquo;

Saturday, five Americans hit double figures &mdash; Walton with a team-high 20, Haney and Hicks, who canned three three-pointers Saturday, with 11 each, and inside presences Derek Willis of Mt. Pleasant, Ky., and Austin Nichols of Memphis with 10 each.

&ldquo;(Team chief) Eddie Ford put this team together to be unselfish,&rdquo; Estes explained.

Also undoubtedly pleasing to Estes was the way his team avoided foul trouble even when pressuring the ball when the French got it onto the hands of their 6-11 center Mouhamadou Jaieh.

Jaiheh, who snared a game-high 14 rebounds, was 10-for-12 from the floor on two-point attempts, most of them on dunks or point-blank hook shots in the lane, en route to a game-high 25 points. But for all his activity, the Americans didn&rsquo;t put the French into the bonus in either of the first two periods.

Even better free-throw opportunity news came just after halftime. The French committed three fouls in the first minute of the second half and put the Americans into the bonus with 7:28 left in the third quarter.

The Americans, who went 16-for-18 from the line Saturday, couldn&rsquo;t have been happier, and closed the game intensely, forcing 14 second-half turnovers, but playing with growing confidence until the final buzzer.

&ldquo;We&rsquo;re ready to go home,&rdquo; said Willis, who led the U.S. with seven rebounds, &ldquo;but we didn&rsquo;t want to go home on a loss.&rdquo;

Even so, the team was loose on Saturday, according to Walton.

&ldquo;Not really,&rdquo; he answered when asked if there were pre-game pressure on the team to win its final game. &ldquo;We came here to have fun.&rdquo;

Spain won the tournament championship with a 76-65 victory over Serbia. Turkey took the bronze medal by beating Germany 90-85. Italy won the fifth-place game over Russia, 69-68.

Saturday&rsquo;s win also ended a three-game skid by the Americans, who won their first two games over Greece and Denmark, only to fall to Serbia, Spain and Russia in their next three.

&ldquo;After the first two games, we got scouted,&rdquo; Estes said about his team, which assembled for the first time just four days before taking on the year-round, junior national teams of six European nations. &ldquo;Serbia and Spain were probably the two best teams in the tournament, and they adjusted. We weren&rsquo;t able to adjust to the adjustments.&rdquo;

In addition to whatever hardware the Schweitzer hands out for seventh place, the Americans, the only non-European team to reach the tourney&rsquo;s quarterfinal pools, will pack some lessons learned into their carry-ons.

&ldquo;I learned how hard you have to play,&rdquo; said Walton, who attends Chandler Park Academy in Michigan. &ldquo;I really enjoyed playing against this talent level.&rdquo;

Echoed Clark, who played just 13:33 and scored four points to end his tourney with a team-leading average of 19.8 points per game, &ldquo;I have a lot more respect for European basketball.&rdquo;

No one, however, could respect European basketball more than Estes, who praised the royal treatment his team received from the tourney organizers.

&ldquo;In the past, when we&rsquo;d go overseas, we&rsquo;d do a lot of teaching to the European or South American teams. Now, I can&rsquo;t praise them enough for the strides they&rsquo;ve made. It was great competition, and great for me, as a coach, to get exposed to these offenses and patterns. I saw some things I&rsquo;m going to take back and put into my program at Palm Beach State.&rdquo;